Chris Sabat Has Been Trolling Funimation On Yelp For YEARS 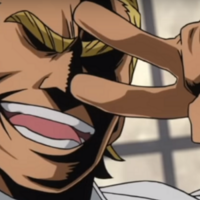 Lots of people review their places of work online. They let prospective employees or consumers know how much a business does or does not pay their workers, whether or not they treat their employees with dignity and respect, if the atmosphere is fun to be around or if people are dying to leave the second the doors close, and whether or not everyone throws on a Hawaiian shirt or a pair of jeans on Fridays. It’s a normal thing for the modern employee to do, and your favorite anime voice actors are no different.

Take Chris Sabat (who won Best English Voice Actor Performance at the Anime Awards!) for example, who wants to make sure aspiring voice actors know exactly what it’s like to scream about Detroit Smashes and Kamehamehas. And if his Yelp reviews are anything to go by … it’s super weird, guys.

The Results Are Hit And Miss

Sabat treats his Yelp reviews of Funimation like he’s actually reviewing a restaurant, sprinkling names of anime series throughout as though they were menu items. But he isn’t always happy with what the “servers” bring to his “table.” In one adorable post from 2016, Sabat complained about ordering a couple pieces of pie and only getting One Piece, instead. We see what you did there, Chris. Thankfully, this diner has improved over the years, starting out with one star in 2016 and growing to eventually earn a middle-of-the-road three stars. It’s all in good fun, though. It’s clear in the playful way the posts are written that Sabat truly enjoys his job and is just out to have a good time with it. 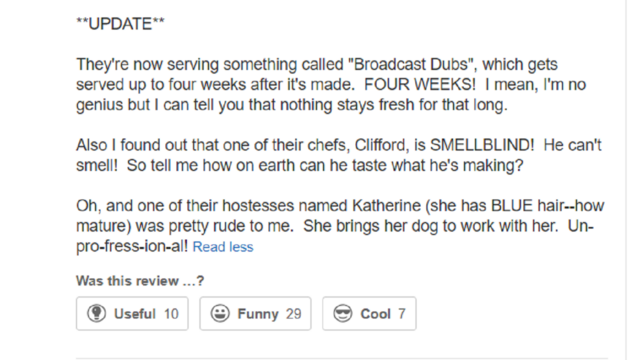 Anyone working at Funimation could become a prime target at any time. Have blue hair and bring your dog to work? (Aww.) You can bet that will turn up in one of Sabat’s reviews. Have you kindly offered a colleague a couple of baseball game tickets? You’re not safe from Sabat’s hilarious reviews, either, sorry. Anything and everything is on the table. Not the literal restaurant table, mind you, the metaphorical one. Oh, but you know what IS on Sabat’s imaginary restaurant table? Cold Black Clover. And he is NOT happy about it.

But Seriously, Why With The Ladders? 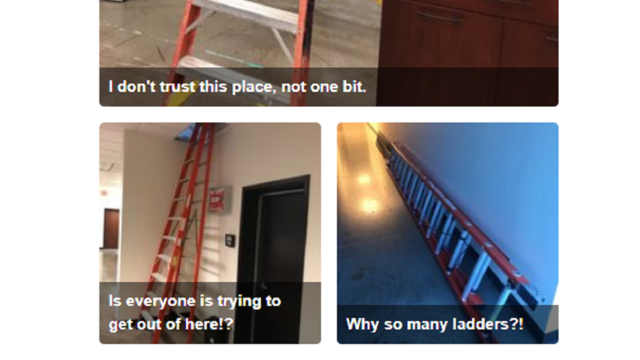 While most of Sabat’s posts are obvious jokes, there is one aspect that feels very real: Christopher Sabat NEEDS to know why there are ladders laying around the building. He will not rest until he gets answers. The actor repeatedly posts photos of random ladders propped against walls or just standing right out in the middle of a room. These posts are accompanied by his best guesses as to what, exactly, is going on here. In one photo he suggests the place is into some shady business. In another, he wonders if everyone is trying to escape. He’s not mad. Really. He just wants to know why. And quite frankly, I think all of us want to know, too.

Got any clues as to the origins of all these ladders? Give us your conspiracy theories in the comments!