The 6 Pokémon Trainers the Anime Forgot

Which character could finally make their debut in the new anime series? 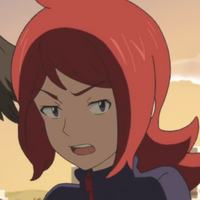 Since 1997, over 1,000 episodes of Pokémon the Series have followed Ash Ketchum's journey across multiple regions, where he's met and battled many of the unique personalities that populate the beloved video game series. Not every character is created equal though, and while some have become pop culture icons like Brock and Misty, others have to feel grateful for even a single episode, and others have yet to appear at all!

However, it doesn't look like the anime is gonna be stopping any time soon, and in all likelihood will probably continue as long as new games are being made. So, with speculation swirling about the new season's return trips to Kanto and beyond, here's who we're hoping will finally get the spotlight they deserve. 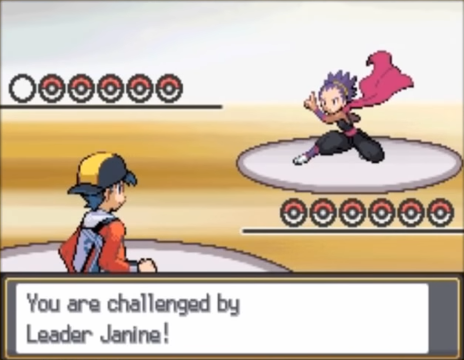 Of the 59 Gym Leaders introduced before Sword and Shield (and if we count Gary as an adaptation of Blue,) each one has made an appearance of some degree in the anime… except Janine.

With Koga promoted to the Elite Four in the Game Boy sequels Gold and Silver, Fuschia City found a new Gym Leader in his daughter, Janine. The young girl only appeared briefly in the Kanto post-game and inexperience made her weaker than her colleagues, so it’s understandable that such a small role was forgotten. Even the English localisation team did, being mistakenly renamed in FireRed and LeafGreen as “Charine”!

The Nintendo DS’ HeartGold and SoulSilver made up for the lack of attention by exploring the adoration she has for her father: she won’t shut up about him, delivers his lunches to the other side of Kanto, and even argues with Falkner over who has the best dad! Basically, she’s absolutely precious.

When Ash returned to Kanto in Battle Frontier, I thought Janine was finally going to appear - there was even an episode about a young woman running a ninja school! But no, instead it was lead by the anime-original Angela, because reasons, I guess? With her recently being featured in the Pokémon Trading Card Game and the newly released Pokémon Masters though, perhaps a return to Kanto could finally give Janine the appearance she deserves? 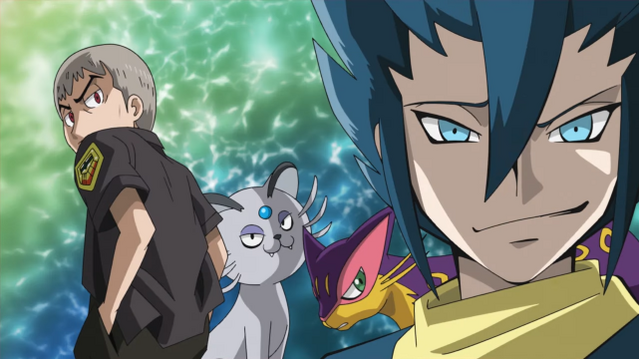 While Gym Leaders are almost always guaranteed a spot in the anime, the same can't be said about a region's most powerful trainers: the Elite Four. Only 3 regions have had their full line-ups appear, and others like Unova have only had 1 - which is a shame, given that Black and White have one of the coolest and most complex line-ups.

Given the series' complicated history with gambling (like The Gamer Corner), it's surprising how important it is to Grimsley's design and backstory. The son of a disgraced noble family, he fell victim to a gambling addiction, before emerging as the dapperly dressed Dark-type master of Unova's Elite Four!

The world clearly hasn't been kind to young Grimsley, however. When we saw him again in Sun and Moon, he had bags in his eyes as he listfully lingered on the shore. In the Ultra variants, he reflects on the despair he felt after putting everything on the line and losing, referring to himself as a former Elite Four member. The circumstances about his fall from grace and who replaced him remain mysteries, but even though they're separate continuities, perhaps an anime appearance could clear them up? His brief cameo in the animated trailer for the Pokémon Masters mobile game gave us a taste of what he may look like in the anime, so hopefully we'll see Grimsley again in one way or another - if not the series, maybe Black 3/White 3? (Come on, Game Freak!). 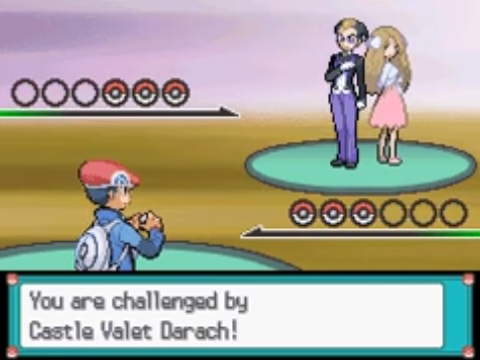 One of my favorite stories in the Pokémon World is that of Caitlin, the quick-tempered overseer of Sinnoh's Battle Castle, who after mastering her runaway psychic powers, earned a place in Unova's Elite Four. While she briefly appeared in the anime however, her backstory and an important part of it didn't.

With Caitlin being unable to battle without her uncontrollable powers running rampant, her personal valet Darach assumed the mantle of Frontier Brain and fended off challengers himself. A refined gentleman and fierce battler alike, Darach is a class act all-round. And after Caitlin left to train in Unova, little has been said about her dashing butler, other than that he makes occasional trips to clean her villa. Should Caitlin return to the anime, hopefully she'll have Darach in tow, because they seem to make an awesome team. 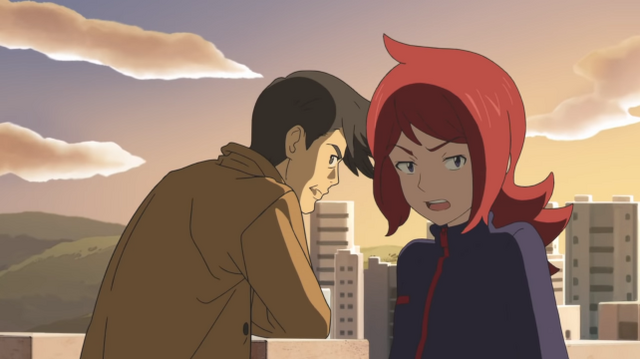 If you were to ask old-school Pokémon fans who their favorite rival is, a good chunk would point to Silver. While Blue was cocky, Silver's a straight up jerk - I mean, we first meet him after he stole a starter Pokémon from Professor Elm! He has good reason to be a grump though: his dad's only the missing leader of Team Rocket, Giovanni! Rather than join the family business however, Silver would prefer to tear it down.

With Team Rocket's boss having a constant looming presence in the anime, you'd think his son would be a shoe-in, right? Wrong. While he appeared in the Pokémon Generations web short and had a cameo in side-story The Legend of Thunder, Pokémon's second most famous rival has yet to appear in the main anime continuity. It's a real shame too, as his presence could be a catalyst for a Team Rocket-focused story arc that brings Giovanni back to the forefront, and his more serious personality would be a great contrast to Jessie, James and Meowth's more jovial dynamic.

It's possible that Silver was the inspiration behind the Diamond & Pearl series' rival Paul, as he has a similar obsession with strength, an abrasive personality, and even similar hair! Their character arcs also had similar endings, with the two starting to show signs of actually respecting their Pokémon partners. While Paul is easily the anime's best rival to date though, seeing the real deal would be great. 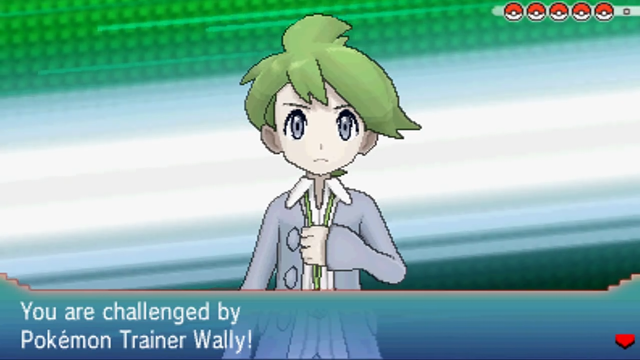 If there's anyone who could have benefitted from the gradual character development that a series allows, it would've been Wally. A timid and frail kid, Ruby and Sapphire's other rival is determined to not let his shortcomings get in the way of becoming a great Pokémon trainer. Seeing his confidence grow in tandem with his abilities was the most rewarding part of his games' story, and the final battle in Victory Road was a perfect climax to that tale.

What made Wally's absence from the anime even more disappointing was that while May had the recurring presence of Drew on the contest circuit, Ash didn't even have a rival for most of his Hoenn adventure. The anime-only characters Morrison and Tyson were hastily introduced right before the Ever Grande Conference, leaving Hoenn's event with none of the build-up a Pokémon League should have.

The most important reason for a Wally appearance now though, is easily so a remix of his amazing Omega Ruby and Alpha Sapphire battle theme can be in the soundtrack. Name me a better battle theme, I'll wait. Although a good contender may be... 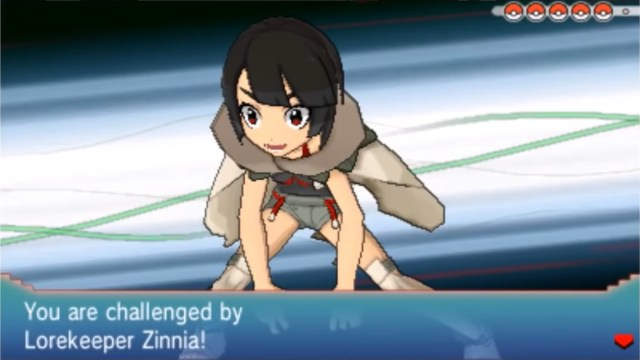 Sworn by a generations old duty to awaken the legendary Rayquaza and destroy a meteor, the fate of the world is on Zinnia's shoulders. After briefly appearing throughout Omega Ruby and Alpha Sapphire, she became the focal point of their post-game "Delta Episode" - perhaps the best addition to the series' lore yet!

Zinnia is a complex and fascinating character. Despite her goal of saving the world, she was prepared to put it in danger by awakening Groudon or Kyogre to lure out the emerald dragon. She can be quite playful (and dare I say flirty) at times, but she also has a pained presence. Her burden hangs heavy over her, as does the pain of losing her dear friend, and Whismur's namesake, Aster.

She could have made a great focal point for a Delta Episode-inspired storyline, and Iris' Village of Dragons could have easily been retconned to be the Draconid Tribe. With the X&Y anime already focusing on Zygarde, we weren't lacking in cool ways to feature her.

The events of Omega Ruby and Alpha Sapphire's endgame established the existence of a multiverse, with the GameBoy Advance originals existing in a reality where the lack of Mega Evolution makes it vulnerable to the meteorite. With the recent movies I Choose You and The Power of Us existing in their own continuity, perhaps a Hoenn-focused follow-up could see Zinnia having to save both of Ash Ketchum's realities?

What Pokémon characters would you like to see in the new anime, and what do you hope to see from the new anime? Let us know in the comments!