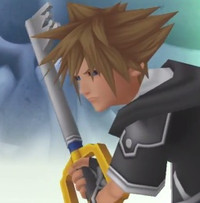 Last week we got a handful of new screens for Kingdom Hearts II.5 HD ReMIX, showing the pair of games and the included Re:coded cinematics. This week it's all about pre-E3 hype, so there's a new trailer for the remastered collection, and if you stick around until the end you'll catch a release date followed by a quick Kingdom Hearts III tease.

We can look forward to more Kingdom Hearts fun next week, when co-director Tai Yasue will participate in and answer fan questions during the Square Enix Presents livestream on June 10.