"Yu-Gi-Oh!" Licensed for Special Edition "Monopoly" and Other Games 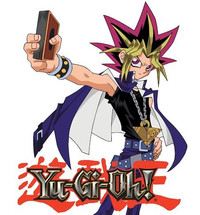 Board game company USAopoly—responsible for a ton of themed games, including Pokémon and The Legend of Zelda themed versions of Monopoly—now has a licensing agreement with 4K Media to produce Yu-Gi-Oh!-themed items. So far plans include Yu-Gi-Oh! coin banks, puzzles, and special editions of Monopoly and Yahtzee.

According to the press release, USAopoly will use animation artwork from the original Yu-Gi-Oh! anime, Yu-Gi-Oh! GX, Yu-Gi-Oh! 5D's, Yu-Gi-Oh! ZEXAL, and Yu-Gi-Oh! ARC-V for coin banks and puzzles. Items are expected to roll into retail next year, with Monopoly and Yahtzee sets scheduled for 2016 and 2017.