Netflix Teams Up With Dreamworks Animation on "Voltron" Series 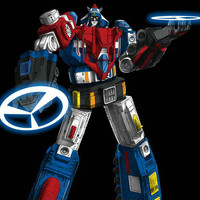 Voltron is reforming, this time with Dreamworks and Netflix combining to form the mecha guardian of the universe inspired by World Events Productions and Toei's localization of Beast King GoLion and Armored Fleet Dairugger XV. The plans are included in a new agreement to create original content for Netflix to stream that also features Trollhunters, a fantasy series from Pacific Rim's Guillermo del Toro.

Voltron adaptation news has been quiet since the first term of the Obama adminstration. In 2011, Relativity Media optioned the feature film rights to Voltron from World Event Prods. with plans for a live-action, big-screen version of the 1984 animated series Voltron: Defender of the Universe.

Thomas Dean Donnelly and Joshua Oppenheimer (the upcoming Doctor Strange) worked on the screenplay about five young pilots in a battalion of ultra-high-tech Robot Lions, powerful vessels with the ability to join together to form a fearsome mega-weapon known as “Voltron."

That was around the time of Nicktoons's CG Voltron Force and following scrapped plans for a harder-edged, PG-13-rated Voltron OVA in the vein of The Animatrix and Batman: Gotham Knight.