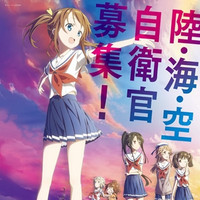 The official website for Japan Self Defense Force's Kanagawa Provincial Cooperation Office has posted a visual for its latest recruitment poster featuring the school uniform girls from the ongoing High School Fleet TV anime. It was newly drawn by the anime's character designer/chief animation director Naoto Nakamura. The anime's title was changed from the initial Haifuri after the first episode premiered on April 9 (at least in Japan).

As reported, JSDF's Tokyo Provincial Cooperation Office previously collaborated with the GATE TV anime for its recruitment posters in June 2015, since the protagonists of its story were JSDF officers and the based novel's author Takumi Yanai was an ex-official.

High School Fleet/Haifuri is an original anime series based on the story created by Takaaki Suzuki, best known as the military adviser for Strike Witches and Girls und Panzer. Considering this collaboration,

the anime is expected to be a very military-friendly series.