"Kill the Unicorns" Kickstarter comes with a cosplay challenge for great justice. 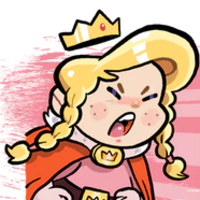 There's a new board game being Kickstarted right now that lets you travel to a land of magical wizards, beautiful princesses, and noble unicorns. Sound good? You also need to kill those unicorns. Sounds even better, right?

Kill the Unicorns from French game creators Morning allows players to take on the roles of fantasy characters, who have the opportunity for four days out of their year to kill as many unicorns as possible. Unicorn farts are toxic, you see -- plus unicorn parts make you a killing on the black market.

The game describes itself as "a calculated attempt to bring out the worst in people," and apparently it did just that: the goal was met in three hours, and the campaign is now flying high at almost 500%!

Now the campaign is into overtime, with challenges unlocking more and more bonuses. The challenges include fundraising ones, as well as social media shares. But the creative among you can help get there faster. Cosplay a character (their pictures are on the page and are pretty easy to closet cosplay), make a craft, take a creative selfie, write a song, or make a collage that makes the team laugh. Answers to those challenges hold a lot of weight, and will help the campaign move ahead.

To participate, check out the Kickstarter page.