Ten-year-old Sakura Kinomoto opens a mysterious book in her father's study and accidentally lets loose the magical Clow Cards. As she lost them, it is her job to retrieve them, which involves finding each card and battling its magical personification. She is assisted by Keroberos (a.k.a., Kero-chan), the beast of the seal assigned to protect the cards, but who was unfortunately asleep when Sakura opened the Clow book. Kero-chan, who appears throughout most of the series rather like a cute animated plush toy, makes Sakura into the Cardcaptor and gives her the key of the seal which allows her to fight and capture the cards.

As CCS progresses, you begin to see a strange pattern of foreshadowing and dreams that lead to a rather interesting conclusion. Like in Magic Knight Rayearth, one of CLAMP's previous works, CCS is a new twist on an old genre.

Results of new Moderators are out!

Congrats to them and I hope everyone in this group will give them your support! You can also help out by giving us opinions about how can we improve this group 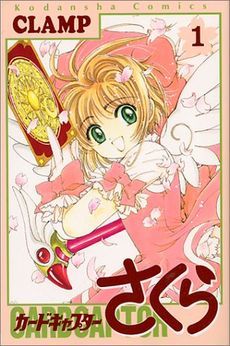 Chapters 1-50
http://www.onemanga.com/Cardcaptor_Sakura/ (no longer available, it has been taken off. the list is still there, but u cannot read them)
http://www.mangafox.com/page/manga/series/78/card_captor_sakura/ 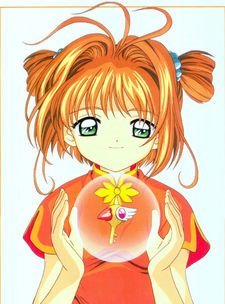 Sakura is an extremely energetic and cheerful character. She is very athletic, being a member of her school's cheerleading squad and an excellent runner. Her "invincible spell", "Everything will surely be all right." (「絶対大丈夫だよ。」, "Zettai daijōbu da yo."?), has carried her through innumerable trials and obstacles as she masters her magical skills. She often comes across as naïve, clumsy, and clueless, but she has her perceptive moments on occasion. Her favorite foods are omelette and noodles with seafood and her favorite recipe is pancakes. Her birthday is on April 1. She hates Mathematics and her blood type is A.
Sakura's optimistic and trustworthy character allows her to be friendly with everybody, and the entire series focuses on the friendships she creates with people, whether strangers, loose acquaintances, or rivals. In fact, her personality is a dominating factor in her relationships, especially with Syaoran. 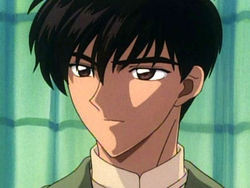 Toya is the brother of Sakura Kinomoto. His birthday is on February 29th, which makes him a leap year baby, a person that can only "properly" celebrate their birthday once every four years. His blood type is O. He holds the belief that as Sakura's older brother, he is the only person entitled to make fun of her, a belief that his best friend Yukito Tsukishiro refers to as a "sister complex." However, he is also protective and caring of her, which leads him to dislike Syaoran Li when he finds Syaoran cornering Sakura in the schoolyard. Though Syaoran and Sakura eventually stop fighting, Toya continues to dislike Syaoran when he becomes friends with Sakura, knowing that Syaoran will eventually take Sakura away from him. He is a perceptive young man and has had a vague idea as to what Sakura has been up to as a Cardcaptor, despite Sakura's attempts to keep it a secret. 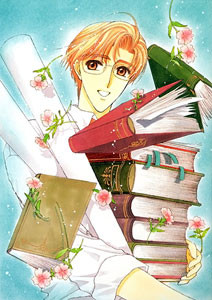 Fujitaka is the father of Sakura Kinomoto and Toya Kinomoto.He is a very busy college professor of archaeology at Towa University who still finds time for his children. He is very kind and caring, and he loves his family deeply, especially his late wife, Nadeshiko. In the second volume of the manga, Toya stated that Fujitaka was very athletic, a possible reason why both Sakura and Toya are good at sports. 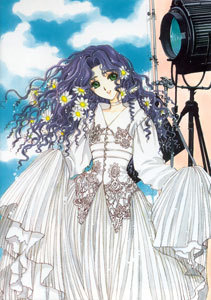 Nadeshiko is the mother of Sakura Kinomoto and Toya Kinomoto. Her husband is Fujitaka Kinomoto. Nadeshiko appears only in memory and in spirit (literally) in the series, as she died (at the age of 27) when Sakura was three years old. However, she is remembered frequently, and her family continues to love and respect her. Fujitaka keeps her memory alive by keeping a picture of her on the kitchen table and changing the picture every day. Sakura makes an effort to greet it every morning. 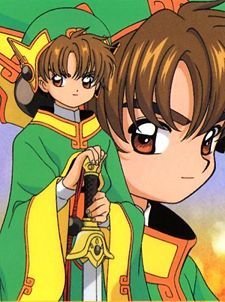 Voiced by Motoko Kumai in the anime, Syaoran is a distant relative of Clow Reed, the creator of the Clow Cards. As a member of the Li clan of sorcerers from Hong Kong, of which Clow's mother was a member, Syaoran believes that he should be the one to inherit the Clow Cards, not Sakura Kinomoto. He first appears as an antagonist in the story, capturing a few cards for himself in the anime (though none in the manga). As the series progresses, and especially after Sakura is officially deemed the new master of the Cards, Syaoran drops his rivalistic attitude towards her and becomes her ally and friend, eventually falling in love with her. However, Sakura is completely oblivious to these feelings and thinks of him simply as a close friend.

Voiced by Yukana Nogami, Meilin is Syaoran Li's cousin and fiancée in the anime. She does not appear at all in the manga, suggesting that her character was created in the anime for filler purposes or to make the anime more dynamic. However, Meilin has established herself as a significant character in the series with her interaction with the main cast and plot. She also balances the main cast by being more expressive and outspoken about her emotions than the other characters. 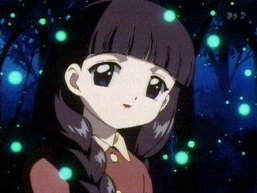 Tomoyo is the best friend of the series heroine, Sakura Kinomoto (Sakura Avalon in Cardcaptors). When she discovers that Sakura has become the Cardcaptor, she becomes Sakura's primary assistant by designing "battle costumes" (similar to another CLAMP character, Hokuto Sumeragi, who designs extravagant outfits for herself and her twin Subaru) and filming all of her magical (and non-magical) endeavours. (The videotaping, however, seems to be more to Tomoyo's personal benefit and enjoyment than it is to Sakura's.) Tomoyo faithfully keeps Sakura's new identity secret and often covers for her in times of need. 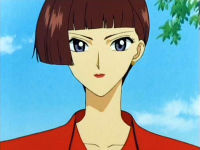 Sonomi Daidōji née Amamiya (King in Cardcaptors) is the mother of Tomoyo Daidouji (Madison Taylor) and the first cousin of Nadeshiko Kinomoto (Natasha Avalon). She is also the president of Daidōji Toys Co., a large toy corporation, and owns a large estate as a result of her wealth. She also has several bodyguards, many of whom are assigned directly to Tomoyo. She is also fairly athletic, once going to the national championships in track and field in high school, according to Tomoyo. 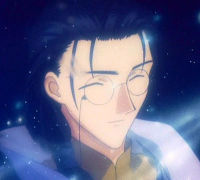 Clow Reed is the creator of the Clow Cards (also referred to as "The Clow"), a series of cards resembling tarot cards with various magical powers within them. Additionally, he is the creator of Yue and Cerberus, assigned to protect The Clow and ensure that it gets passed on properly to new masters. Syaoran Li (Li Showron) is a distant relative of Clow, as Clow's mother's family is the Li Clan. 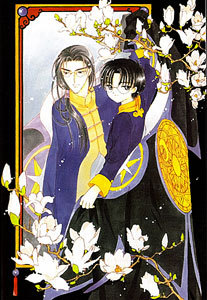 Eriol transfers to Tomoeda Elementary from England soon after Sakura Kinomoto (Sakura Avalon in Cardcaptors) defeats Yue in the "Last Judgment" and becomes Master of the Clow Cards. He quickly befriends Sakura, a feat which persuades Syaoran Li to postpone his return to Hong Kong, who became both jealous and suspicious of Eriol. 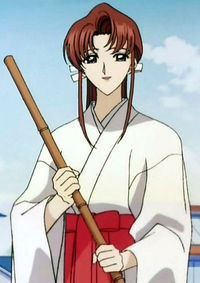 Kaho first appears in the series as a mysterious substitute teacher at Tomoeda Elementary School, where she teaches math to the class that includes Sakura Kinomoto and Syaoran Li. The two students have opposite reactions to her: Sakura takes an instant liking while Syaoran responds with coldness and worry. When Sakura, Syaoran, Meiling, and Tomoyo Daidōji go to Tsukimine Shrine and are trapped by The Maze, they are rescued by Kaho, who is the daughter of the priest. She also possesses an artifact called the Moon Bell, which can affect Clow Cards. At the same time, it is revealed that not only did Sakura's older brother Toya know Kaho, but also that they had an intimate relationship while she was his junior high school teacher. Toya reveals that Kaho had broken up with him so she could go to England to study; she also told him that, in their next meeting, they'd be in love with other persons, their own relationship sealed as a deep friendship. 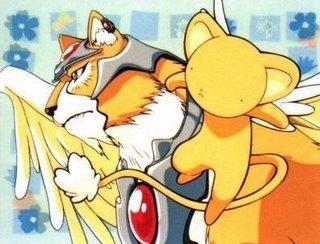 Cerberus/Kero
Cerberus's name and form are based on Cerberus from Greek mythology, a large three-headed beast who was assigned to guard the gates of Hades, a parallel to Cerberus’s duty in the Cardcaptor Sakura storyline where he guarded a deck of cards form the cover of the book that contained them.

Cerberus's name and form are based on Cerberus from Greek mythology, a large three-headed beast who was assigned to guard the gates of Hades, a parallel to Cerberus’s duty in the Cardcaptor Sakura storyline where he guarded a deck of cards form the cover of the book that contained them. 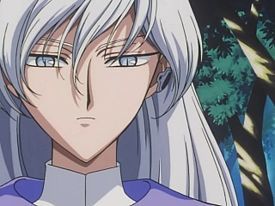 Yue is the one of two Guardians of the Clow Cards, along with Cerberus. While Cerberus acts as the elector, choosing a candidate to become the next Master of the Clow, Yue is the judge who will test the candidate. Though very little of Yue's critical information is known for certain, it is logical to assume that his blood type is AB, as it is the type listed for his temporary form and is also the type corresponding to his personality according to the Japanese theory of Blood Type Personality (which is used throughout the Cardcaptor Sakura series). Some fans originally believed that because Yue, like many of the powerfully magic characters in the series, doesn't appear to age, that he was immortal, but this theory was shot down by Clow Reed who said in the fourth book of the manga that "every living thing must come to its end", including himself, Yue and Cerberus though they never seem to age or weaken. On the outside he acts very cold and aloof and is much more serious and intimidating than his counterpart, Cerberus. 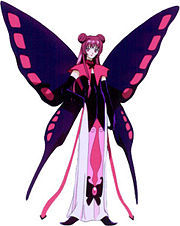 Ruby Moon is one of the mystical guardians created by sorcerer Eriol Hiiragizawa as his counterpart to Yue. When Eriol transfers to Tomoeda Elementary, Ruby Moon takes on the disguise of Nakuru Akizuki and enrolls at Seijou High School in the same class as Toya Kinomoto and Yukito Tsukishiro .Once there, she becomes a general nuisance, continually barging in on and "glomping" Toya and sending Yukito away on errands, often with enigmatic statements.
In her true form, Ruby Moon is capable of flying (with her butterfly-like wings) as well as firing ruby shards from her hands, and being able to form long bladelike trails of energy off her hands like Yue. She is much younger than Yue and is apparently neither as skilled nor as flexible, which may be why she tries to get rid of Yue through deception rather than direct confrontation. Eriol admits later in the series that his main reason for creating Ruby Moon was to oppose Yue in combat.

please put this banner in your profile to help support our group!!^^
and please do not steal our banners and pics