Which american shows should be Anime?

Some shows in america were just not made correctly. But, if they were anime they would probably b huge successes. Here are some cartoons that a lot of people think should be anime.

Invader Zim-great american show about an alien sent to earth to destroy it. But one,he got the worst assistant ever. Two, he is a terrible planet destroyer. I mean he attacked his own species. And Three, theres a human named Dib who is trying to stop him.
Here's the show in America: 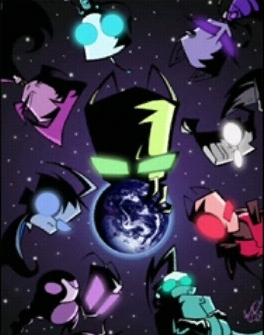 And here's the show if it was an anime: 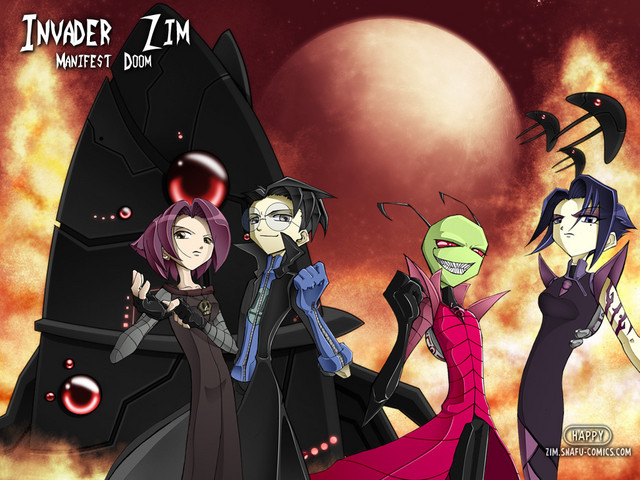 Fairly oddparents-This show is about ten year old Timmy Turner who apparently is the most miserable child on the planet. So in all of that he gets Fairy godparents, Cosmo and Wanda. In the show they do a lot of stupid things. Timmy has an evil babysitter,he happens to be the sidekick of a superhero, and he basically wishes for the stupidest things ever.
Here is the show in America: 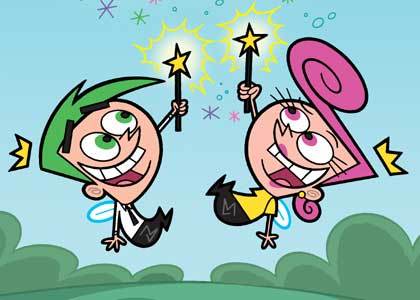 Here is the show if it was an anime: 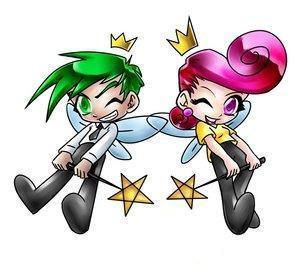 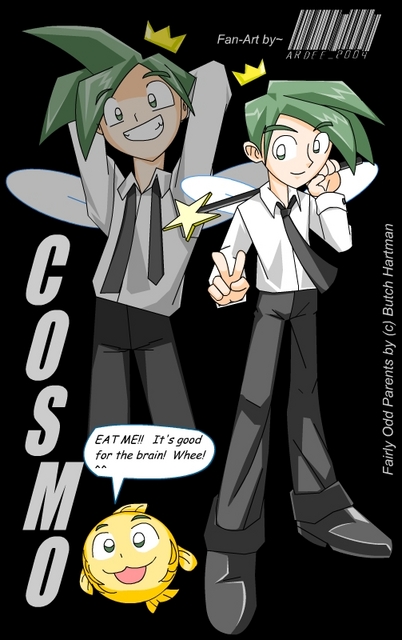 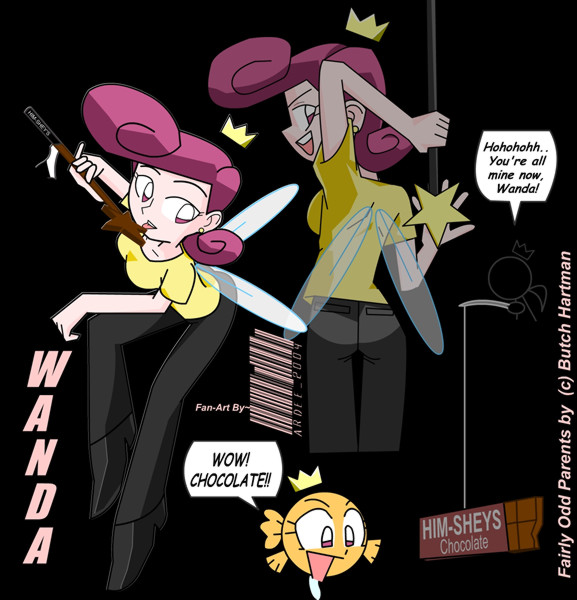 The grim adventures of Billy and Mandy-This weird ass cartoon is about a boy named Billy and his best friend Mandy who have a run in with the Grim Reaper,reason being is because he was there for Billy's old dying hamster. But Billy is so upset he begins to whine about it,so much that Mandy decides to
challenge Grim to a duel justto make Billy shut up.And the game was limbo. Grim had them beat until the hamster bit him, so now Grim was to be Billy and Mandy's best friend forever.The show is very funny and successful as a cartoon.But what if it was an anime.
Here's the show as a cartoon: 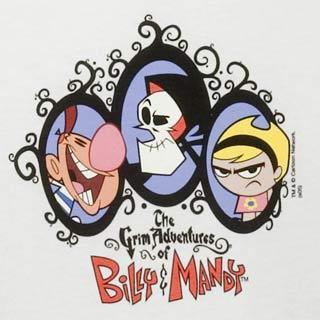 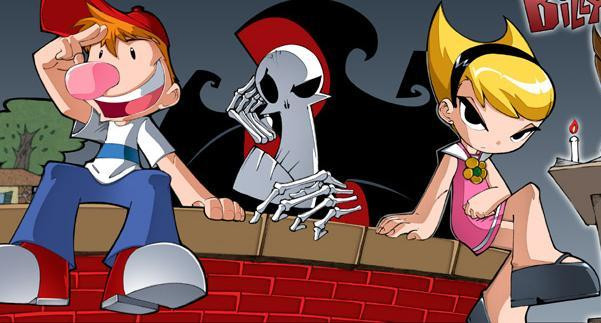 The Simpsons-This great show is about an average everyday family trying to get through in life. The father Homer, along with his wife Marge and his three children Bart, Lisa, and Maggie, go through their day always running into trouble.When the show is over they usually always learn some sort of lesson or moral. This great cartoon has had over 10 successful years of being on the air. With their recent movie as well they are a huge success.Im not really sure if Japan should try and make this an anime, but with their sense of humor in Japan it would either truly hilarious, or it could just terrible.
Here's the show as a cartoon: 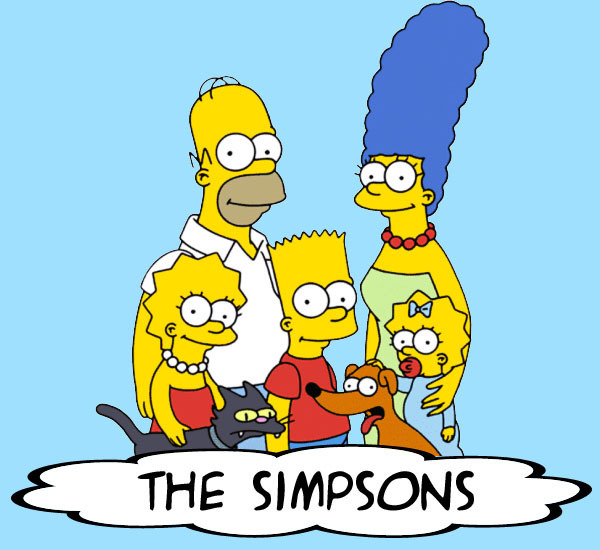 Danny Phantom-This is a show from the man who made Fairly oddparents. This show is about a boy coincidently named Danny Fenton. His parents happen to be ghost hunters so they always have some crazy new invention. Their latest creation was the ghost portal,a portal that lets you enter the ghost zone. But at the time the machine was not working, but Danny decided to take a crack at it. And it just so happened that it worked right when he entered it. His DNA was fused with the power of ghosts.So from then on he was Danny "Phantom". He now has abilities such as floating, shooting plasma energy out of his hands and forming a shield with it, a destructive ghostly wail, and turning invisible. His best friends Samantha(sam for short), and Tucker are the only ones who know of his secret.He has fought foes such as Skulker, Vlad Masters(his arch enemy),Amber the guitarist ghost and more.The show has done fairly well but is incredibly cheezy and has the lamest jokes and puns on the face and history of the Earth. This is why if it was made in Japan it would've been a lot better.
Here's the show as a cartoon: 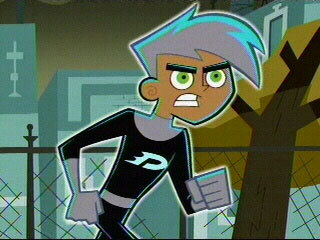 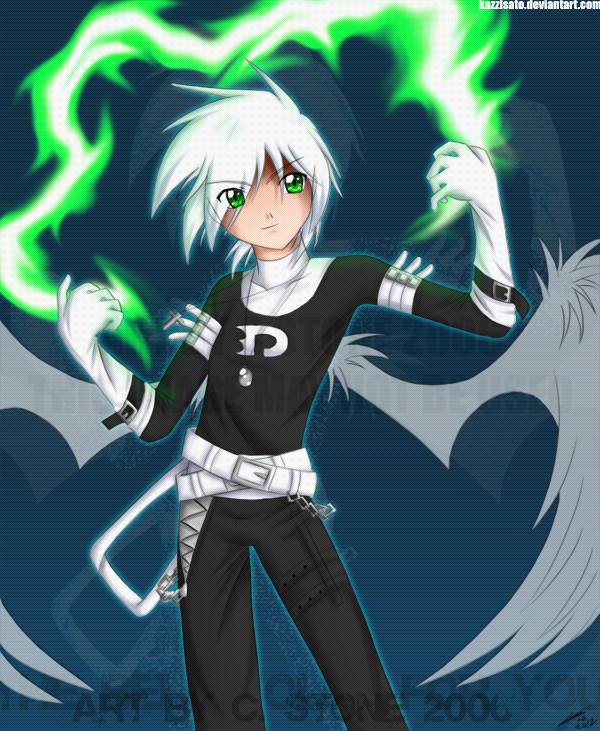 Scooby Doo- This ancient but very well done show is about a group of teenagers and their talking dog, Scooby Doo, go around solving mysteries. The group consists of two girls, Daphne and Velma, and two boys, Freddy and Shaggy, and of course Scooby Doo. The show has been a great hit here in America.There were great things from Scooby Doo such as the hit 70's and original version of Scooby Doo, there was a mini show that was known as "a pup named scooby doo" which had pretty good ratings, and two huge successful live action movies.But with the good there is the bad. There was the very unsuccessful "What's new Scooby Doo?", the newer animated movies from scooby doo, and the recent WB kids series "Get a clue Shaggy and Scooby". Even though the series has had some bad ideas,this show has great potential and has the making of an anime. This is why the show should be made into an anime.
Here's the show as a cartoon: 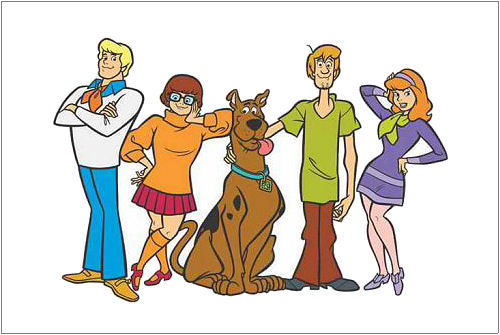 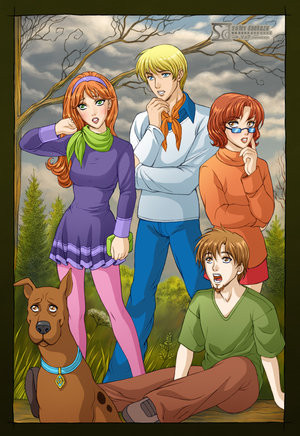 Kappa Mikey-This is a one of a kind show.This show is about an American boy named Mikey Simon whose dream is to become an actor. While in Japan the cast of the hit anime show Lilymu is looking for a new lead role character. So they decide to have a contest and whoever wins shall be the new lead character in the show Lilymu. The contest tickets were distributed only in Japan but somehow one ticket just happened to fly all the way from Japan to America and it just happens to land in Mikey's hands. When he scratches the card(Just for the record the contest was a scratch and win contest. You know like the lottery)he sees that he won and he automatically becomes the new star. He heads for Japan to meet his cast members. Gonard,the villain in the show,Lilly, the sort of Damsel in distress, Mitsuki,usually the pilot of their ship and also Damsel in distress,and Guano, the shows mascot.Along with the shows manager Ozu and his very random partner Yes-man,as in he says yes a lot and approves of ozu's actions. Together they are Lilymu. The reason this show is so unique is because the show is drawn already in anime style. The concept of the show is all anime. The show only draws American style for American things such as houses,people in and from America,and the country itself. Even though technically counts as the first ever American made anime, and uses Japanese words and writings, it still is an american cartoon. The show also uses some 3D animation but it is not very good. So for these reasons the show would probably be really good as an official anime.
Here's the show as an American anime: 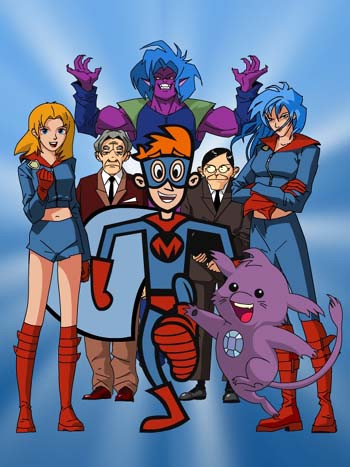 Now here's the show as an official anime: 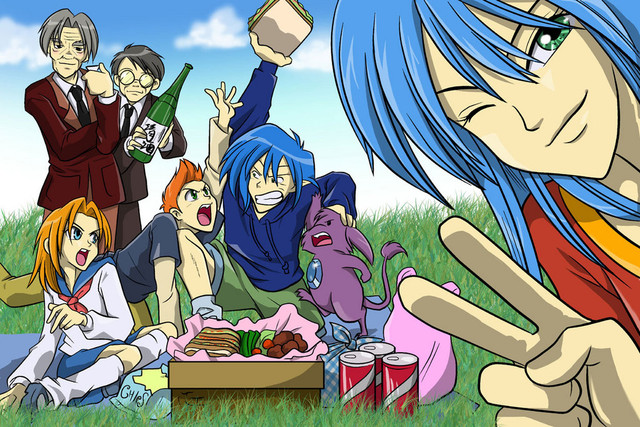 Ben 10-This show is about a boy named Ben Tennyson who ends up spending his vacation with his grandpa Max and his above average cousin Gwen. His grandpa Max was an ex Plumber(or alien hunter) and his cousin Gwen learns to cast incantations and spells. So while on vacation they park in a spot in the forest,and since Ben isn't happy about spending his summer vacation with his grandpa and cousin and storms off away from the campsite. Meanwhile in space an alien ship unknown to us is under attack by an all powerful alien named Vilgax. He happens to be after the powers of what is known as the Omnitrix. But ironically the Omnitrix forced to be sent away from the ship into safety. While Ben strolls through the woods he coincidentally happens to see the pod containing the Omnitrix. Curiously he approaches the pod and out pops the watch and latches onto his hand. With this device he gains the abilities of ten aliens. But along the way he gains more aliens. The show is pretty successful and has had its own live action movie. Plus a new series is about to premiere soon on Cartoonnetwork. But even though it has been good the show to me seemed very badly done. The story lines are good but there are some things about it I can't stand.For example his name is Ben "Ten"nyson, he is known as Ben 10,he starts with ten aliens, and he is a ten year old boy. A little to dumb. Plus it has the lamest theme song in the planet. So this is why the show should be an anime.
Here's the show as a cartoon: 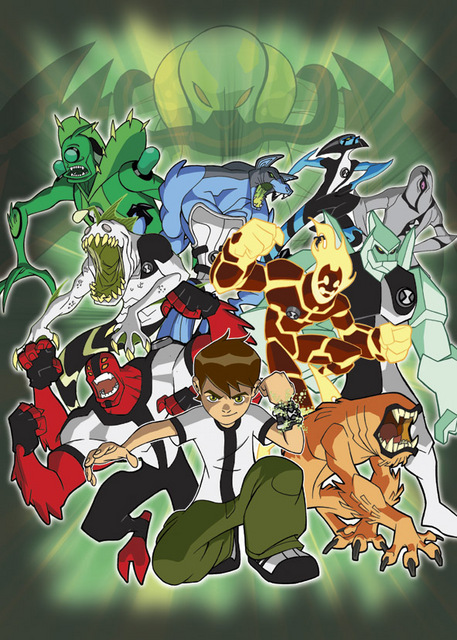 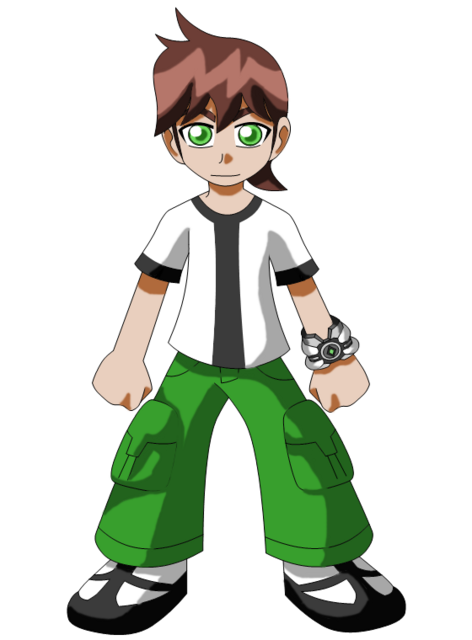 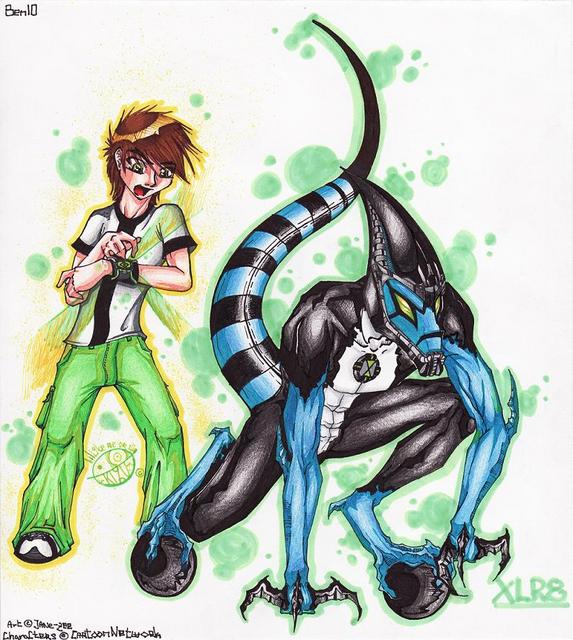 Teen Titans-This show is based on the Marvel comic book the Teen Titans. This show is basically about a team of super powered teenagers known as the Teen Titans. This incredible team includes Robin,who also happens to be Batman's partner,Starfire an alien female who accidently came to Earth because she was captured,Raven,the daughter of a demon who seems to rule an underworld,Beastboy,a human boy who has the ability to transform into any creature(including alien species), and Cyborg, a half human half robot who used to be a full human high school student who played football until an accident. Together they take on enemies such as Slade,the hive five, and Raven's father.They have pulled through almost all situations they have been in. But there were some situations where they just couldn't save everybody. Such as when they were in a position to defeat Slade but they had to sacrifice another member of the Teen Titans Terra.This show has done really well in its time, but it has been canceled I think due to low ratings. So cause of the this I believe that this show should be adapted into an anime. Even though it was drawn sort of like anime, it's still not an official anime,like Kappa Mikey.
Here's the show as a cartoon: 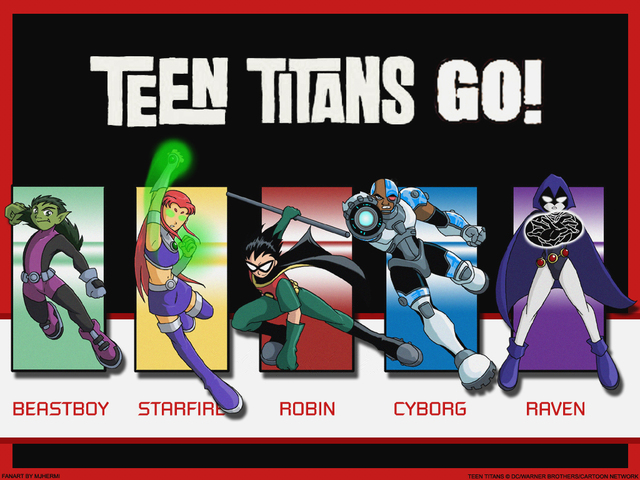 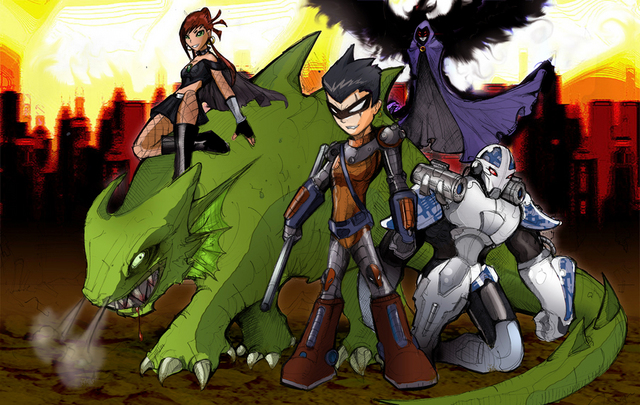 Gargoyles- The series features a clan of warrior creatures known as Gargoyles that turn to stone during the day. Led by their leader Goliath in the year 994 A.D., they protect Castle Wyvern and its resident humans on the coast of Scotland until betrayal causes a massacre of the clan and a magic spell forces the six survivors into stone sleep, until "the castle rises over the clouds." In 1994, a billionaire named David Xanatos purchased the castle and moved it to the top of his New York City skyscraper. The spell is broken when the castle is literally placed above the clouds. Awakening in modern day Manhattan, the gargoyles must adapt to their new surroundings as they vow to protect the citizens of New York.The gargoyles main characters include Goliath the leader of the gargoyles,Hudson the eldest of the gargoyles and the advisor of the Gargoyles, Brooklyn the second in command after Goliath and is the one who comes up with strategies for situations, Broadway the overweight but good natured gargoyle who is more of a pacifist than a fighter, Lexington the smallest but brightest of the group. He is very handy with all the new technology he comes in contact with. Demona is Goliath's former mate and Angela's biological mother; not frozen in stone like the others, she lived through the thousand years because of magic and developed a hatred of all humans, making her an enemy to the gargoyles. Angela, the daughter of Goliath and Demona she was raised in Avalon and joined the gargoyles in the 2nd season. And Bronx the pet gargoyle who resembles a dog. The show ran an amazing 78 episodes and a couple of vhs and dvd releases this show had a good time. But since it's cancellation i've been thinking that this show should be an anime.
Here's the show as a cartoon: 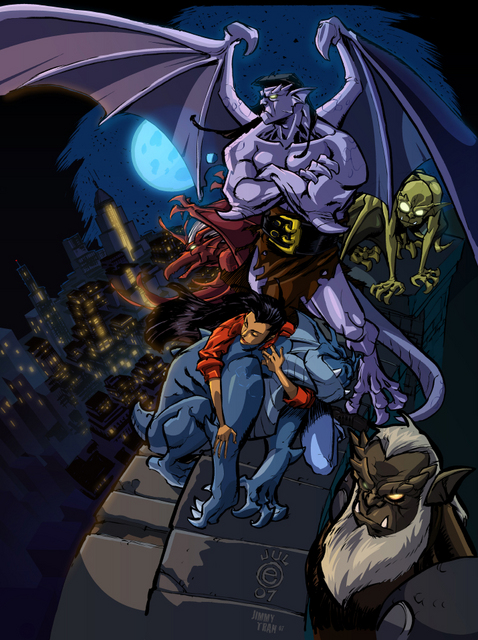