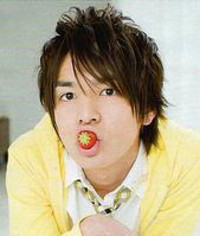 Be rEady gUyS cAuSe tOma will caught YouR hEart...kyAa!!!

His family consists of a father, a mother named Hiromi, a younger brother named Ryuusei, and a dog named JAM. His father wanted to name him Ikuta Tamegorou, but his mother changed it to Toma because it was easier to say. He used to be called Toma, Touma, or Toma-chan by his family and friends. Younger juniors in the agency used to call him Toma-san and that morphed to Tomasu. This name was used to be his “trademark” as he hosted a corner named Meitantei Tomasu in the Shounen Club program.

TRIVIA:
,.Ikuta was the one who came up with the name NO BORDER.
,.He ranked no. 2 after Shun Oguri on Oricon survey conducted from High School girls "which celebrity they would want as a boyfriend" ,
,.He is a big fan of Backstreet Boys. He even begged Music Station’s staff to let him in the studio to watch Backstreet Boys rehearse.
,.He used to call his mother “Okaa-chan” when he was little, but after being teased by M.A.I.N’s members, he called her “Okaa-san”.
,.Toma is also a fan of X Japan, especially of popular guitarist Hideto Matsumoto. He once talked on the phone with Subaru Shibutani (Kanjani8) for an hour, just discussing X-Japan.
,.He and his younger brother Ryuusei are fans of GLAY and they attend every single concert during his spare time.
,.He and Shun Oguri had to kiss 12 times for the drama, Hanazakari No Kimitachi E.
,.He and Oguri were the ones who came up with the nickname Horikitty for Maki Horikita who they acted together on Hanazakari no Kimitachi E.
,.He and Eiji Wentz used to be in a kids band named "Strawberry Parfait", but when they got an offer to enter Johnny's, only Toma accepted.