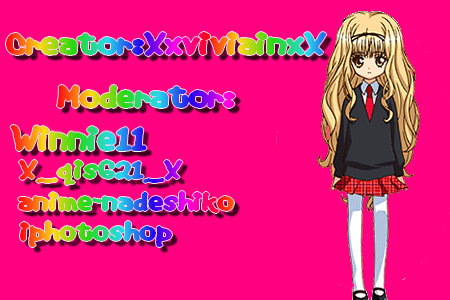 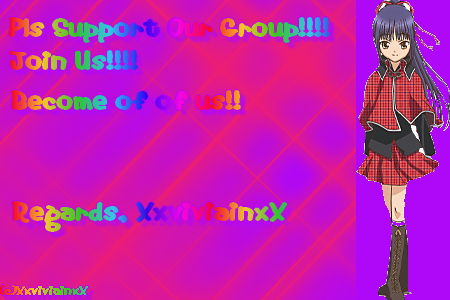 Please Join My Group And Put Our Group Banner In Your Profile!!!!!!! 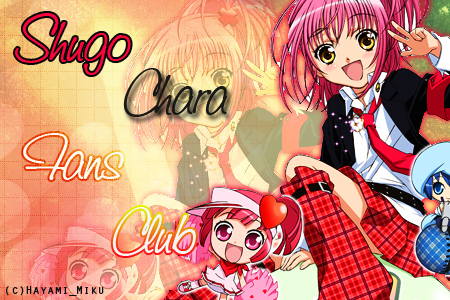 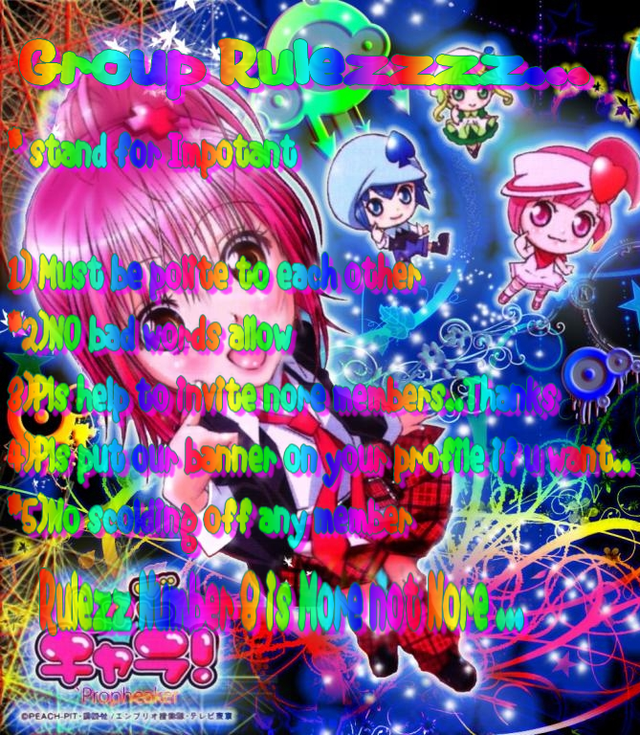 The above pic is copyright by me, the creator...XxviviainxX..

Hinamori Amu (日奈森 亜夢, Hinamori Amu?)
Character Transformations: Amulet Heart (Ran), Amulet Spade (Miki), Amulet Clover (Suu), Amulet Diamond (Dia), Amulet Angel (Eru), Amulet Devil (Iru)
Amu Hinamori, the series protagonist, is student of Seiyo Elementary (fifth grade at start of story). Amu was seen as a cool and stylish girl and has become popular at school but what she really is is just a shy, gentle, and extremely normal girl. The main reason for this misunderstanding is the trendy punk and gothic lolita clothing her mother buys for her. One night she wished she was not the type of person she currently was, and on the next morning, three Guardian Eggs appeared.
During Character Change and Character Transformation her hair clip changes (Ran→Heart, Miki→Spade, Suu→Clover, Dia→Diamond) The characters Amu becomes are good at certain activities like Amulet Heart who is athletic, Amulet Spade who is artistic, Amulet Clover who is a skilled house-worker or maid, and Amulet Diamond who is a musician.
Amu has a crush on Tadase Hotori, the King's Chair of Seiyo Elementary's Guardians. However, when she confessed her feelings during her first Character Change with Ran in front of the entire school, Tadase refused her. Amu later learns that Tadase is not good a receiving confessions and would Character Change with Kiseki, who would refuse the confession.
At first, Amu rejects the offer to join the Guardians, using the excuse that she does not want to wear the royal cape. But the Guardians announce her as a member anyways under a special position, Joker's Chair. On joining the Guardians, she receives the "Humpty Lock", a locket with a four leaf clover decoration. Nadeshiko states that the very first king left it and said, "Entrust this to the joker whom comes with three Guardian Eggs." Later on, it was explained to her that the Joker's duty is to hunt X eggs.
It is seen that Amu has a crush on Ikuto as whenever he touches her, she blushes which she does not realizes at first but began to be aware of. In volume 5, Amu goes on a date with Tadase, which shows a little bit more development of their relationship. She also was confronted by Ikuto, on her date, resulting to a confession from Ikuto saying the actual reason he bothers her is because he is interested in her. This is also shown as Miki liking Kiseki and Yoru, but liking Yoru seemingly more.I think that Amu have too much shugo chara already and people said that she have one more,after character transformation,it will be "Amulet Witch". 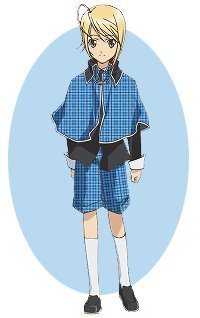 Hotori Tadase (辺里 唯世, Hotori Tadase?)
Character Transformation: Platinum Royale (Kiseki)
A kind-hearted and mature boy the same age as Amu who serves as the K-Chair (King's Chair). His alias is "Prince", as he is a bishounen, and he is Amu's love interest. Whenever he is called "Prince," his character changes into a violent, egotistical king who wishes to rule the world. Because of this, he does not do Character Change with Kiseki unless it is absolutely necessary. Actually, he too is a shy person and is not a public speaker. Because of this, he wished to become another, stronger character, much like Amu. He lives in a traditional Japanese house. He had a precious dog named Betty (name learned in volume 2 of the manga) who died recently, and is still upset about it.
He, along with the other guardians, tried to get Amu to join because of a prophecy about a girl who will appear with three Guardian Eggs. At one time he lost confidence, as he could not seem to find the Embryo at all. He was then affected by the Black Diamonds CD, causing Kiseki to change to an X egg. Amu helped him out of this crisis and he is now able to Character Transform with Kiseki, becoming Platinum Royale. His attack is, "Holy Crown", in which he creates a golden shield of energy around himself. When he becomes Platinum Royal he has lots frills and laces. It is said the the writer purposely did this to make him more princy.
He claims to have a crush on Amulet Heart. He once also said that he loved Amu because Amulet Heart is her "self that she wants to be". At first he is about the same height as Amu, but as the story progresses, he grows taller. In chapter 28, Tadase confesses that he likes Amu by asking if it was OK to fall in love with her, saying that he has learned Amu really is herself and doesn't think about Amulet Heart anymore. In chapter 28 of the manga Tadase sees Amu for more than Amulet heart and confesses.
In episode 28, Tadase reveals that he was once childhood friends with Ikuto and Utau. He looked up at Ikuto and called him a brother.

Sanjou Kairi
The boy serving as the new Jacks Chair. He is tall but actually he is two years junior to Amu. He prepares for Guardian's activities. Though the youngest he is capable, Amu and Yaya call him "class president". Wears spectacles. He is actually Yukari Sanjou's younger brother sent to spy on the Guardians, however, he switches sides after Amu convinces him he is a good person, to fight and purify the X-Eggs.Kairi likes Amu very much and even said that he will not lose out to Tadase,the person Amu likes.

Souma Kukai (相馬 空海, Souma Kukai)
Character Transformation: Sky Jack (Daichi)
The upbeat and energetic former J-Chair (Jack's Chair), he is one year senior to Amu. As the captain of the Soccer Club, he is athletic and has good reflexes. Once, in the school magazine, he and Amu are mistaken to be a couple as a student got a picture of him holding Amu after she came out of her Character Change and lost her strength. He has graduated, which is the reason he has been replaced. Saaya appears to have a crush on him, as when she saw the picture of him with Amu, she was furious. Through the power of the Humpty Lock, he and Daichi managed a Character Transformation once, forming "Sky Jack." Daichi says the words 'Kick, Stack, Trap and Shoot!' during a Character Change with Kukai.He seems to have a very special bond with Yaya, since the two are always seen together and he is always watching out for her. The two share similar personalities as well.

Fujisaki Nadeshiko (藤咲 なでしこ, Fujisaki Nadeshiko?) (real name Nagihiko Fujisaki (藤咲 なぎひこ, Fujisaki Nagihiko)
The graceful but somewhat enigmatic former Q-Chair (Queen's Chair), who is the same age as Amu. When Amu rejected the offer to join the Guardians, Nadeshiko tried many ways to convince Amu; One of those was to bribe Amu with photos of Tadase sleeping .
It was revealed later on in the manga that Nadeshiko is a boy and his real name is Nagihiko. It is the rule of the Fujisaki family that the males are trained to become oyama (male actors who plays female parts in kabuki). That is why Nagihiko wears female clothes and goes by a female name. He is currently studying abroad in Europe to make his dancing "complete".
In chapter 27, Nagihiko is shown with the First K-chair, Tadase, and Kukai. The First King has decided that Nagihiko will serve as the interim Jack, since Kairi left at the end of Chapter 26. Kukai and Tadase are the first few people that knows Nagihiko's secret, the others being Nagihiko's family and the First King. Also seen in chapter 27 is that Nagihiko has 2 guardian eggs, and that Temari has gone back into her egg. Who the other Guardian Character is unknown, but some fans presume it to be the "Nagihiko" version of Temari.
Nagihiko has yet to do a Character Transformation with Temari, however his character after Character Change is a battle-hungry yakuza type who speaks in Hiroshima slang and carries a naginata. He is good friends with Amu, and he looks over and supports Amu in her love life. Temari says 'Chin, Ton, Shan' during a Character Change with Nagihiko.

Yuiki Yaya (結木 やや, Yuiki Yaya)
Character Transformation: Day Baby (Pepe)
The childish and a bit immature girl serving as the A-Chair (Ace Chair), she is one year junior to Amu. Yaya likes the sweets baked by Nadeshiko. Her hair is tied in pigtails with a big ribbon. She does not know how to swim. She is also a ballerina, though a rather clumsy one.
She has newborn baby brother named Tsubasa, who, she claims, gets all her parent's attention. It is because of this that her Guardian Character, Pepe, is a baby, because she claims the they get all of the attention.
Her Character Change character is a baby that uses a giant rattle as weapon; influenced by the "baby" character, she has a crybaby personality. Pepe says 'Pretty, Cutie, Love Baby!' during a Character Change with Yaya. She is very attached to Kukai since she is always hugging or standing next to him. The two are always seen together and always tend to look out for each other as well as argue.

Mashiro Rima
The girl serving as the new Queens Chair. Same age as Amu. A short, cute and beautiful girl with a selfish personality. She is well-liked among male students but hated by female students, such as Amu. She feints crying to deceive people. Her Chara Become with Kusu Kusu is called "Clown Drop". When she does Chara Change she becomes a gag character which she dislikes. The words 'Bala-Balance' spark her Character Change.She don't like jokes which don't make people laugh,When she listen to jokes which dun make her laugh,she will scold the person and Character Change. 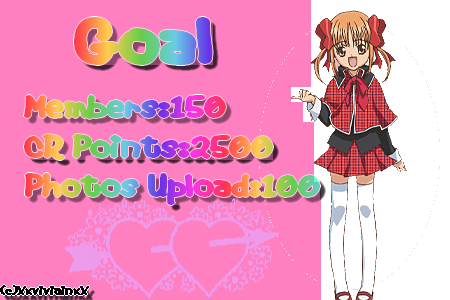 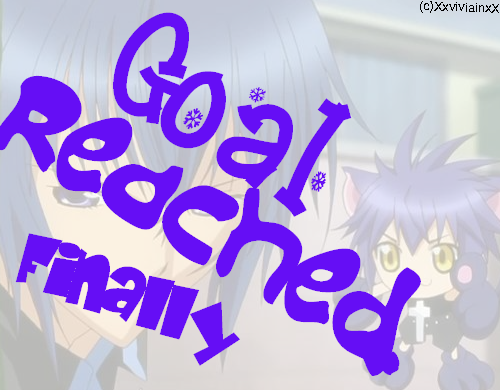 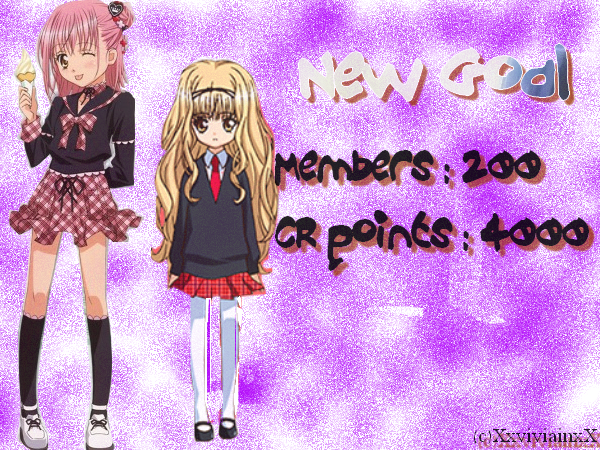 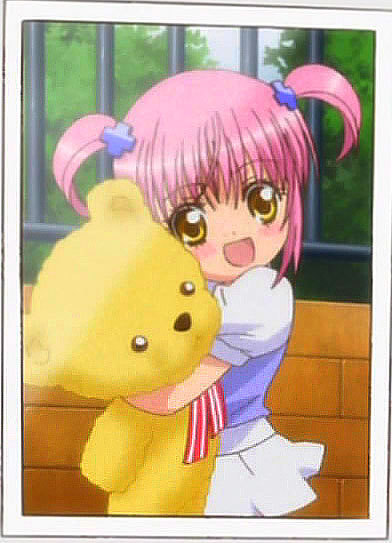