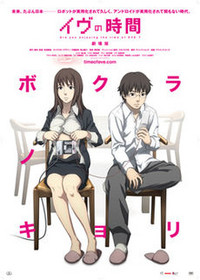 Time of Eve (イヴの時間 Ivu no Jikan) is a six-episode ONA anime series created by Yasuhiro Yoshiura. Produced by Studio Rikka and DIRECTIONS, Inc., the series streamed on Yahoo! Japan from August 1, 2008 to September 18, 2009, with simulcasts by Crunchyroll. A theatrical version of Time of Eve premiered in Japan on March 6, 2010.
In the not-too-distant future, androids have come into common usage. Rikuo Sakisaka, who has taken robots for granted for his entire life, one day discovers that Sammy, his home android, has been acting independently and coming and going on her own. He finds a strange phrase recorded in her activity log, "Are you enjoying the Time of Eve?". He, along with his friend Masakazu Masaki, trace Sammy's movements and finds an unusual cafe, "The Time of Eve". Nagi, the barista, informs them that the cafe's main rule is to not discriminate between humans and androids. Within the cafe, androids do not display their status rings, and, when patrons depart, the door is automatically locked for two minutes to prevent someone from following them to discover their true nature.

The first few episodes involve conversations between Rikuo (usually accompanied by Masaki) and the cafe regulars: the bubbly Akiko, child Chie and her elderly guardian, the lovers Koji and Rina, and others. These conversations make frequent allusion to Isaac Asimov's Three Laws of Robotics, often highlighting surprising interpretations of those laws, some of which form apparent loopholes. The overarching plot involves the beginnings of independence displayed by the androids, what they do with that independence within the bounds of the three laws, and what motivates them. Secondary plots involve the individual stories of each android the protagonists encounter in the cafe, and how they come to discover which patrons are androids and which are not.