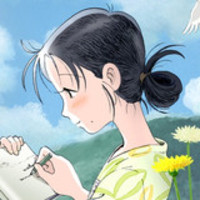 The story of the production for In This Corner of the World sounds like a sequence of miracles. The film was on track to be MAPPA’s Redline, spending five years in production limbo which the director Sunao Katabuchi spent constantly in transit between Tokyo, Hiroshima, and Kure researching the locations and interviewing the remaining residents who had been alive during that period. Unable to obtain funding due to questions about the marketability of the film, MAPPA eventually resorted to crowdfunding and were able to find the finances needed, but only after reassessing their plans and cutting 20 minutes of animation from the production. There were no plans for marketing the film, MAPPA simply put out in select screenings and hoped word of mouth would be enough. Thankfully, it was. 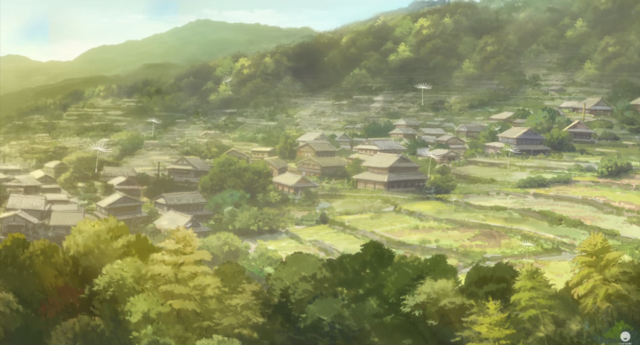 The film was critically acclaimed, earning a cabinet full of awards, growing into a commercial success, and eventually making its way to the United States for select screenings where I was one of the lucky few to watch it, along with an unaired pilot, at Otakon 2017. My experience can only be described as gut-wrenching and one I'm not likely to forget for a while. In consuming and critiquing large quantities of media you grow accustomed to recognizing your own emotional response then checking it to analyze a work on a technical level. In This Corner of the World has proven a unique challenge in that regard as, even two weeks since I watched the film, I've found myself having trouble distancing myself from it to write this piece. Such was the power of this truly wonderful work half a decade in the making. 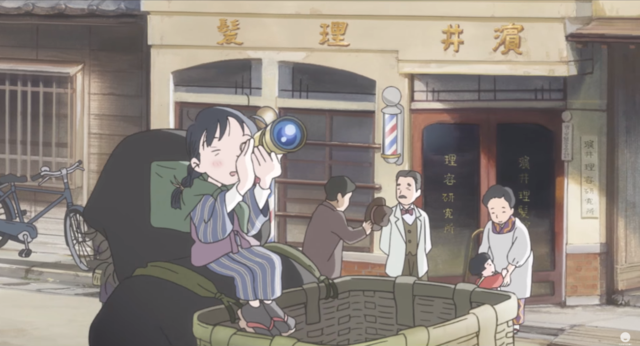 In This Corner of the World, based on a manga of the same named written and illustrated by Fumiyo Kono, follows the life of Suzu, a daydreaming, artistic middle child of a peasant family in Hiroshima. Starting in the 1930s, the film skips through the lazy years of her childhood, eventually reaching her arranged marriage into a family living in the nearby town of Kure, the building war effort in Japan leading into WWII, and finally atomic bombing of Hiroshima. Unlike other animated films tackling primarily the aftermath of Hiroshima and Nagasaki such as Grave of the Fireflies and Barefoot Gen, In This Corner of the World takes a more longitudinal perspective of the life of Japanese people during WWII, putting a sharp focus on their day to day and the slow transformation of the country over the course of the war. In doing so, it captures the tragedy of what happened to the Japanese people in a way none of its predecessors have managed. 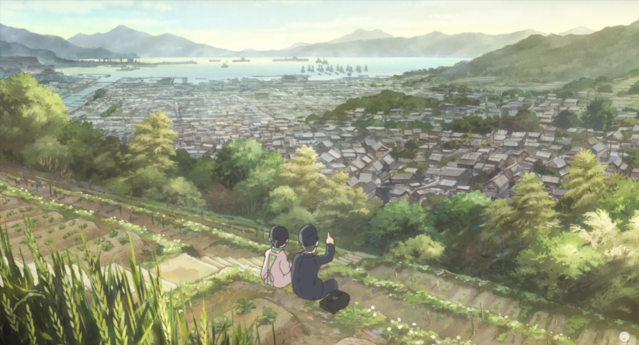 The dedication to authenticity in In This Corner of the World is a sight to behold. Character designer and chief animation director Hidenori Matsubara stated that production had a hard rule for portraying Hiroshima and Kure. Unless they had a picture of what they were depicting, knowledge of the material it was made of, and its precise color, they wouldn’t put it into the film. A planned sequence, in which Suzu would sketch her favorite places in Hiroshima during a trip home, before her return to Kure, and ending at the Hiroshima station, instead ended at a department store since they couldn’t find a photo of the station during the exact period she was visiting. He mentioned the difficulty finding photos due to espionage prevention regulations and relying on interviews with individuals who had been alive during that period. One sequence, with school girls singing on their way to a military factory, was an addition specifically requested by one such individual. Everything surrounding Suzu and her two families is as close to reality as MAPPA could approach, just as it was during WWII. 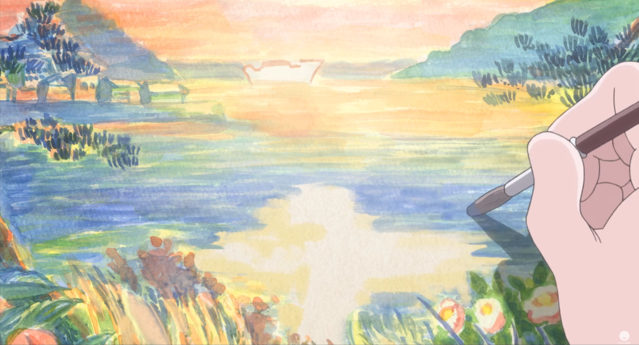 Above and beyond the obsessively-researched environments, what really drives home the authenticity is how fully actualized Suzu feels. The setting can be a picture-perfect recreation but ultimately we can only experience the world from a human perspective. A daydreamer and an artist, we witness events through Suzu’s unique interpretation of her experiences. This is particularly prominent during the moments of terror and violence, where the world takes on a surreal aspect as she struggles to contextualize what she is witnessing. In one awe-inspiring scene, Suzu's first sight of AA flak appears as multi-colored splatters of ink on the canvas of the sky, expressing a beauty in perhaps one of the most terrifying moments in Suzu’s life. Paradoxically, this impressionistic depiction made the reality of what she was experiencing seem all the more horrific. There is a mysterious interplay, both visually and narratively, between Suzu’s daydreams and the harshness of her reality that I have yet unravel. It evoked feeling of primal fear and a struggle to comprehend what must have seemed like a waking nightmare, like an ancient cave painting of a tiger. 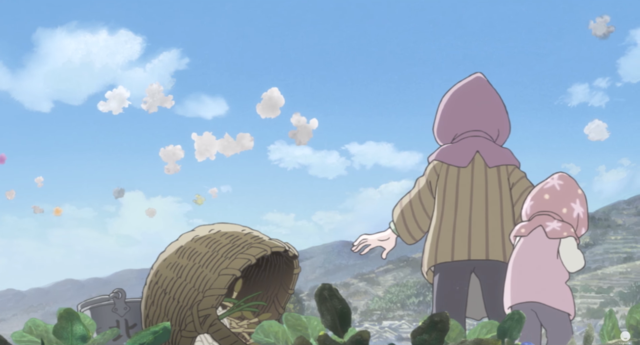 Rather than focus exclusively on the event of and aftermath of the atomic bombing of Hiroshima, the strength of the film may rest in the way it humanizes the people of Kure and its portrayal of the uncountable ways war stole from them before they ever saw bloodshed. We’re made witness to the slow intrusion of war into the everyday life of Suzu and those around her. At first they’re made to attend training and mobilized to support their military efforts, then things begin to be taken away from them. Food rationing intensifies until the taste of sugar, salt, and rice are distant memories and their young men are enlisted and board ships headed toward unknown fates. Suzu suffers a personal tragedy when she is prohibited from painting since any landscape art could be an act of espionage. By the time they first experience one of what would become uncountable air raids, we can keenly feel their sense of loss and determination to continue their lives uninterrupted. 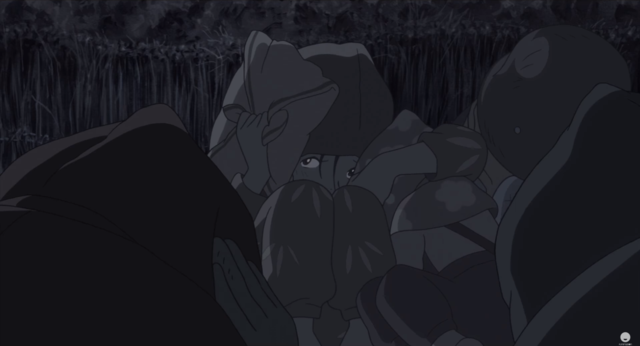 The slow pacing of the movie is magnified by jumps in time indicated with dates, with each skip growing shorter and shorter as the date approaches one of the most infamous moments in human history. It’s a uniquely nerve wracking experience watching these people struggle to simply live and enjoy life, ignorant of the unspeakable doom that approaches them. The fact that the film can find ways to make you smile and laugh amidst this pervading feeling of helplessness, often even in the most horrific situations, is something of a wonder and a testament to the durability of the human spirit. Months, even years, of hardship are still moments lived by these characters who find ways to joke and things to look forward to. Suzu and Shusaku suffering gentle ribbing from the Hojo family after being caught kissing while digging a bomb shelter or Suzu’s father-in-law sleeping right through an air raid. 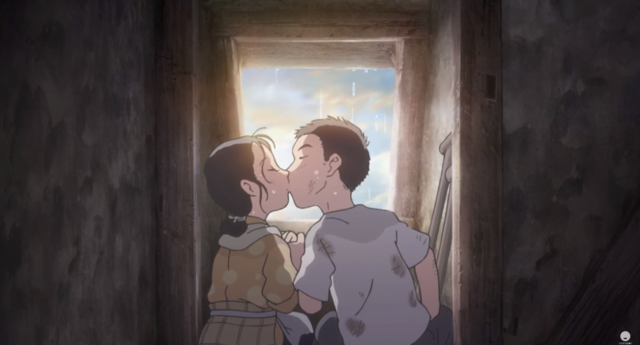 As the calendar finally counts up to August 6th, 1945, we’re made witness to just one of several scenes I’m not sure if I’ll ever be able to forget. Although Kure was a safe distance from the explosion, the blinding white flash, rumbling shockwave, and days spent finding objects from Hiroshima scattered about their town was just as effective as our first glimpse of the city’s remains. Strangely, the most intense scene for me was when the central cast, gathered around a radio, listened to the announcement that Japan would surrender to the United States. The raw emotional response was unsettling. At no point did it seem as if Suzu had any investment in Japan’s victory, lacking any context of what it might even mean to her life, but defeat was absolutely devastating. After years of struggle and sacrifice in the name of the war effort, coming to terms with that fact that all that hardship had been meaningless was impossible to come to terms with. 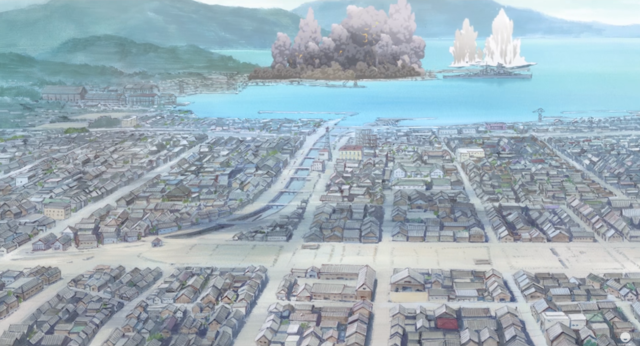 Matsubara stated that he often finds himself thinking about what Suzu is up to today and, whe director Katabuchi speaks of her internally, he refers to her as if she were a real person, a practice which the other members of production began to adopt. After exhaustively working to recreate Japan during the 20 year period of Suzu’s life in the film, she began to feel real to them and that feeling of authenticity shines through. 2016 was a tremendous year for animated films, so I want to impress upon anyone reading this review that, up against titles like A Silent Voice and Your Name, I believe In This Corner of the World may be the most important to watch.