Check out the real-world locations of Love Live! Sunshine!! 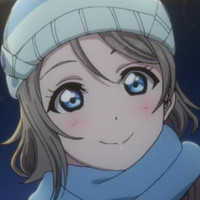 I was originally dead set on finally writing my Love Live! Sunshine!! article about the show’s main setting, the small seaside town of Uchiura, for this week’s Anime vs. Real Life, but thought it would be best to change plans for the occasion of Aqours’ unexpected trip up north in the latest two episodes. Next week’s installment will be all about the girl’s sunny hometown, but for now, the spotlight will be on Hakodate – the venue for the Hokkaido Love Live regional preliminaries.

Chika and the rest of Aqours have managed to build up quite the reputation in the school idol world, and have been invited as guests to the prelims, which are taking place in the hometown of fellow Love Live title contenders, Saint Snow. The sister duo chose a fitting name for their group, considering that the first thing that comes to mind when thinking about Japan’s northernmost main island, Hokkaido, is probably snow. Hakodate’s weather is also known to be chilly and unpredictable all year round. I got to experience that firsthand this summer during my own trip to the scenic port city, located at Hokkaido’s southern tip, where I managed to capture quite a few of the real life locations that got featured in the latest episodes of Love Live! Sunshine!!

While the trip’s main purpose for Aqours was to view the Hokkaido prelims, the girls understandably wouldn’t let the chance for a little sightseeing slip by, so on the next day they set out to explore the city. A special spot for them is the Hachiman-Zaka Slope, the most popular of the 19 sloping streets running at the foot of Mt. Hakodate. These slopes, which are faintly reminiscent of San Francisco, have been a popular location for dramas and anime for quite some time, and will likely now also draw the attention of countless Love Livers. The spot for some reason reminded the girls of Uchiura; however, the close proximity to the ocean and the scent of sea water in the air is just about the only thing that’s similar. As opposed to Uchiura, Hakodate has always been a historically important port town, and is the third largest city in Hokkaido.

Chika and the gang also head up the Goryokaku Tower, which offers a great bird's-eye view of the…

... Goryokaku Fort! The massive western-style, star-shaped citadel was built by the Tokugawa shogunate in 1855 for the defense of Hakodate against overseas powers. But the fortress went down in history for a different reason, as the place where the remnants of the Tokugawa shogunate army held their last stand in 1868-1869 against the armies of the newly formed Imperial government. The defeat and surrender of the remaining Tokugawa military and the short-lived Ezo Republic marked the end of the civil war known as the Boshin War, and ushered in the Meiji era. The ending formation of the "Awaken The Power" song looks like a small nod to the star-shaped fortress, doesn’t it?

The admirable You is admiring the bronze statue of Hijikata Toshizo, the former vice-commander of the Shinsengumi (a special police force) and last military leader of the remaining Tokugawa troops who fell in the battle of Hakodate. Hijikata is a popular figure in various dramas, manga, and anime, like in Drifters or even Gintama, where you might know him as the demonic vice-commander Hijikata Toshiro. For some unknown reason, Love Live! Sunshine!! decided to change the posture of the statute in the anime.

Just like Kanan, I also had the guts to step on the see-through floor of the 107-meter observation tower.

Sightseeing obviously makes one hungry, so the girls head out for a Hakodate specialty. Whilst the city is usually known for its fresh seafood, Hakodate also has its very own eccentric and popular burger chain, Lucky Pierrot. Don’t let yourself be fooled by the restaurant’s eerie façade and the creepy clown mascot towering above it (clowns and burgers seem to be a good match everywhere in the world), because they actually serve a really good burger! Lucky Pierrot currently has 17 restaurants all over the city, each with their own unique theme. The girls ate at the circus-themed one at the bottom of the slopes, which was also the first one that opened in the city.

Unfortunately, I myself ate at the one in the bay area, which was only about three minutes away from the one in the anime. While I didn’t get the same burger as in the show, I did also eat the cheese covered french-fries in a mug, which surely reduced my lifespan by about two years, minimum.

And what about the gigantic burger that Hanamaru has been chowing down nonstop during the last couple episodes? Yes, that one is also very, very real. While Lucky Pierrot has established itself as an institution and can be considered a must-try in Hakodate, the constant product placement was simply getting too much at the end of the short arc, at least for my taste, zura.

I’m glad that the Hakodate trip shifted the focus to Ruby, and finally gave her some much-needed time in the spotlight. In one of her best scenes, Ruby sorted out her feelings about Dia’s unavoidable departure from Aqours once this Love Live is over. She does so at this little park along the port (containing a bronze statue of Joseph Hardy Neesima), which can be seen as an unintentional metaphor for the fast-moving nature of the school idol world, since it’s not possible to recreate the anime shots anymore due to the current remodeling of the park.

The wooden building in the back is a small shopping mall with a seafood restaurant.

I also had a good laugh when the hotel where I stayed at during my three-day visit, the HakoBA Hotel, showed up in the anime.

Hakodate has always been an important trading port, and was also among one of the country’s first harbor cities that were opened to international trade after Japan's era of isolation. Many of the early 20th-century red brick warehouses still stand today, forming the heart of the atmospheric bay area, and have recently been redeveloped into a modern shopping and dining complex. In the anime shot you can catch a quick glimpse of Mt. Hakodate, which was completely covered in fog on my first day there.

After finally sorting out her feelings, Ruby comes out of her shell to confront Leah, who’s in a similar situation, and drags her through the whole warehouse district to the annual floating Christmas tree. And after an argument about whose sister is better (just to put it out there, Sarah can do a backflip), they ultimately decide to write and perform a song together.

Hakodate being one of the first Japanese ports opened to international trade naturally resulted in an influx of foreign influences and cultures. Many of the foreign traders settled down at the foot of Mt. Hakodate, shaping the subsequent cityscape of the Motomachi district by building many foreign looking buildings, like the Old British Consulate, the Chinese Memorial Hall, and the Russian Orthodox Church. Another one of these modern buildings is the Old Public Hall shown above, which overlooks the Hakodate Bay.

The colonial-style assembly house’s large ballroom was used in the anime to select performers for the upcoming Christmas event.

Saint Aqours Snow’s inaugural performance then took place at the foot of the Hachiman-Zaka Slope. Just like shown at the start of the song, the trees planted along the slope get illuminated during winter.

While the song’s location certainly is spectacular, it might just not be the best idea to sing and dance around when there are still cars and trams driving right behind you.

But a trip to Hakodate would be worthless without a glimpse of the city’s main attraction, the night view of Mt. Hakodate, which can be reached via ropeway.

The ropeway would never be as empty as it was in the anime, just like the observation platform atop of the mountain, which is basically a tourist warzone once it gets dark.

Tourists flock the 334-meter high mountain, located at the southern end of the peninsula, for a good reason, as the view from the top really is breathtaking.

The night view from Mt. Hakodate is ranked among the best three night views in Japan, and I think it’s as clear as day why. The amazing panorama topped of two of Love Live! Sunshine!!’s best episodes so far, and will surely tempt a good number of fans to pay Hakodate a visit.

I hope you enjoyed my write-up of the Love Live! Sunshine!! Hakodate locations! I had quite a good time there, as you can see, so I was ecstatic when the place showed up in the anime. I also compiled the few locations that I didn’t get matching pictures of in a small album here thanks to Street View, and have also marked them on my map below. Those include places like Saint Snow’s restaurant, the tiny playground, the train station, and the city’s airport (the anime really wanted to let you know all the ways you can access Hakodate). By the way, I traveled there by ferry from Aomori, so there’s also that option.

Thanks for turning this into a gif, @makimyangeru!

Please make sure to check out next week’s installment of Anime vs. Real Life, where I’ll be taking a look at Love Live! Sunshine!!’s main setting, Uchiura, and share some of my thoughts and observations of my second visit. You can read my two articles about the first season’s locations here and here.

Has the second season of Love Live! Sunshine!! met your expectations so far? And does Hakodate seem like a city you’d like to visit after seeing it in the anime? Let us know in the comments below! Yousoro~