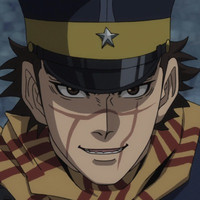 Golden Kamuy's official website is releasing a series of interviews with cast and staff over the course of the Spring season, which we're translating and brining directly to you! They started things  off with the character designer, Ken'Ichi Onuki, which we put up last week, and this week we bring you the animal designer, Ryo Sumiyoshi who is working on Golden Kamuy as his anime debut! 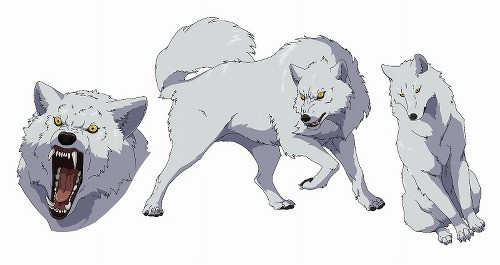 This is your first time working on an anime. Tell us how you got involved with the project.

Someone on the Golden Kamuy staff was a long-time fan, and asked me if I’d like to do the animal designs for this project. They came all the way out to an exhibition I held in Nara, and we had a meeting there that lead to me working on the project.

How did you feel when you got the job?

I like animals, and living creatures are all I’ve ever drawn. I’m glad that they appreciated my work and gave me a chance to draw the things I love and share them with the world. It was a chance to put the design experience I had from an old company I’d worked at to use, so I was very excited to get the offer.

I was impressed by Mr. Noda’s passion for mixing the abnormal with the normal everyday life in order to make an interesting story. He researched the culture and daily life of the Ainu and of the period to a level that was almost creepy. (This is a compliment.) And then managed to turn all of that into a work of entertaining fiction without having to leave things out. His passion for the project is scary, and while I’ve read every volume, the sheer weight of the work is so much that I can’t simply enjoy it as I read. 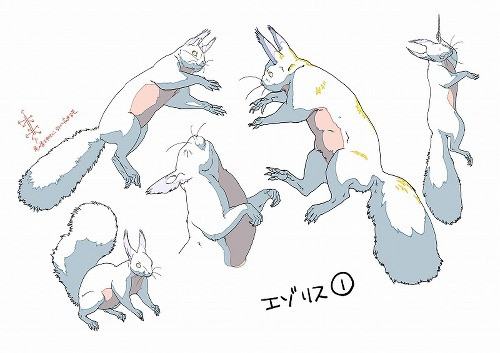 There are a lot of animals in this show. How much of that is your work?

I was really excited to get the chance to draw animals being dressed and skinned! But sadly, someone else is in charge of that. I handled all the other major animals in the story, though. Mammals, birds, fish, they put me in charge of almost all of that. It was a lot of fun.

Tell us what animal you started with first.

Retar and the bear. It’s necessary, unfortunately, to get the major characters down first early in the process, but between the fact that I needed some time at the start to figure out how to do the art and the expressions, and I was also doing research for my own personal animal art at the time, while I gave it my best effort, there are things that, looking back, I would have changed. After that design work was done, I was able to do keyframes for the ending credits, where I did my best to fix those problems. I hope you’ll look forward to seeing that. 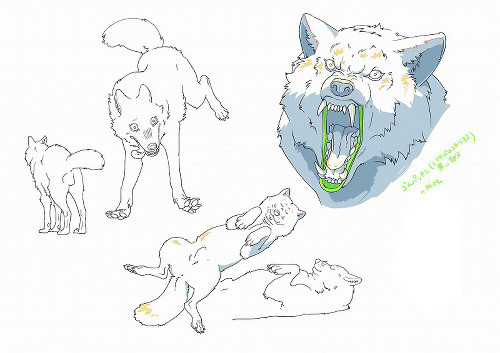 What kind of things were of particular importance to you when doing the design work was done?

In Golden Kamuy, where the animals are and what they’re doing is very important. I’m not very good at drawing real animals, so I went back and studied their muscular and skeletal systems again. When I’m drawing my own work, I can hide the parts that I don’t understand or am uncertain about from the viewer, but this time, I couldn’t get away with that. So I tried my best to keep my own style out of the way, rather than let it interfere with the art.

You can’t just draw the animals as they are, but at the same time you can’t just deform them like you would in a normal anime or manga. You need to figure out how the animals that Asirpa and Sugimoto saw seemed to them at the time, and bring that to life in an anime. I was also really careful about trying to make it so that the charm of the original art wasn’t lost when the animals had to move around on the screen. It was very difficult, but a lot of fun. When a retake came in from Mr. Noda, I was very excited, and I learned a lot.

What were some difficult parts?

Herring… Herring. It was especially hard to find reference material. It’s not that bad with famous animals, but when I needed to find a head-on shot of a herring, I couldn’t do it. There just didn’t seem to be any reference. I bought encyclopedias of bluefish and cooking books, but most of them only had shots from the side, none from the front, diagonal, or above. I thought about trying to use another bluefish for the design instead, but the thickness around the head and the location of the eyes are fairly unique, and if I used another fish you’d end up with something entirely different. I ended up doing all kinds of things, like having someone I knew introduce me to a person who made 3D models of herring, or buying herring for dinner, or looking for videos of people fishing for herring. The herring dinner taught me nothing, but it was tasty.

It also felt like any animals that I drew regularly (like horses), I would need to be particularly careful on because I have my own ways of drawing them. So I went back and studied their structure again and tried to keep my own habits out of the art. 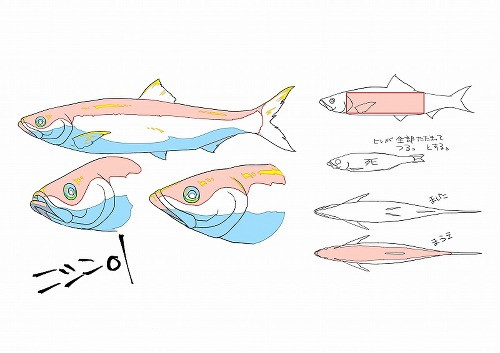 Tell us anything in particular you remember about your interactions with Director Hitoshi Nanba and the rest of the staff.

When I was turning in my designs, I attached little diagrams for each animal, showing how the animals moved or details about their lives, things that I thought would make it easier for viewers to understand the animals themselves. Later when the director saw this, he said, “Sumiyoshi is a pervert,” which I consider high praise.

All I did was provide the basic designs for the animals that were to be used for the animation. The most I could do was give the animators designs that would make the animators say, “I want to make this come to life!” That’s why I did everything I could to make sure that there was nothing they wouldn’t understand or couldn’t do. As I did each drawing, I was reminded of the fact that these are all very different creatures, with complicated patterns on their fur and ways of moving. Many times when I would be saying to myself, “They’re going to animate this stuff? And they expect to survive?” I would get another order that would make me go, “Y-You need this, too?!” The orders were for animal expressions, detailed closeups, information about how they moved, all kinds of really little things. I could really feel the intensity of the staff’s passion for bringing these creatures to life. Honestly, I’m looking forward to seeing the end result.