VA-11 HALL-A: Cyberpunk Bartender Action has hit the Switch, and we’ll tell you if this is a drink worth putting on your tab! 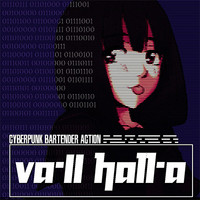 Bar, pub, saloon, tavern, dive. There are so many names for places where people congregate to drink, socialize (or not), find connections (or not), and escape from the world around them. They’ve been a fascinating part of media and culture for decades, if not centuries, with some historians even saying that early beer halls and public halls, and the creation of beer, are responsible for saving early Europe from dirty water and viral diseases. Shows like Cheers have put drinking culture into pop media for years, and there’s countless instances of bars appearing in video games, movies, anime, and more; in fact, most good noir and cyberpunk stories worth their weight in salt feature a bar prominently at some point. That said, there aren’t really a lot of works out there about actually being the one slinging drinks behind the bar, and the day-to-day life of a bartender in these worlds is not always explored. In VA-11 Hall-A, you not only get to explore life in a dystopian cyberpunk future, you also get to be the one serving drinks and making ends meet, creating one of the most unique gaming experiences in recent years. 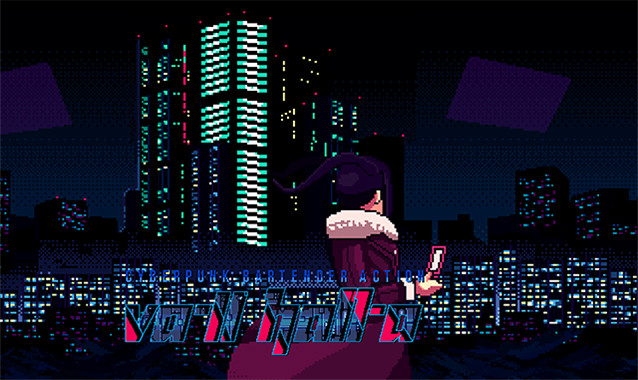 In VA-11 Hall-A, players take on the roll of Jill, the bartender of the bar VA-11 Hall-A, a somewhat dour woman with a past and whose mundane life in the dystopian world she lives in may end up crossing into some unexpected and mysterious paths. Perhaps one of the best things about the game is the cast of characters you encounter, all of them unique and vastly different from one another, leaving lasting impressions on you as they come into the bar and ask for drinks and, of course, company, although that second part may not always be so obvious.

One of the interesting parts about VA-11 Hall-A is that you really don’t see much of the world outside of the bar and Jill’s apartment, except through textlogs that you can read. Unlike many other cyberpunk and visual novel games, you aren’t going to save the world or solve a mystery, or even bring about the end of your dystopia, you’re really just trying to make it through the next day of work and pay your bills. In this respect, the game is somewhat fascinating, because while the stakes are high, your agency isn’t, stopping you from becoming the savior of the world you’re experiencing. This brings one of the choices of the game to the fore: you don’t really make any dialogue decisions, and what choices you can make are limited usually to determining the ending you will receive upon completing the game. Aside from that, the player is experiencing Jill’s life in the passenger seat, seeing how she interacts with the various people that enter the bar, and her relationships with others that we get to witness developing. 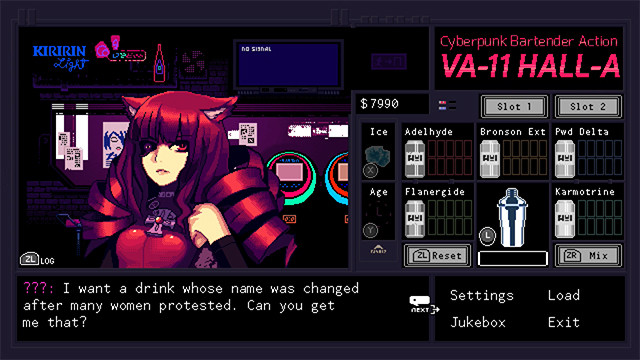 The gameplay portion of VA-11 Hall-A comes from the mixing of drinks that Jill serves to customers, and is the main interactable function in the game. Jill has the ability to access a computer screen that tells her the components of every drink she can make, and then the ability to mix those drinks. Yeah, you can indeed screw drinks up, but overall the game doesn’t really punish you for this overtly, and the plot will still progress even if you serve the wrong drink, but it may affect things like a game over or the ending you get. Still, the drink mixing mechanic is unique and interesting, and the fact that you can actually mess up does mean paying attention matters. The game even offers you the ability to remake a drink if it notifies you that you’ve done it wrong, as long as you haven’t actually served it to the customer yet.

Other than mixing drinks, there really isn’t much else to ‘play’ here, meaning that the game is more of a visual novel than it is anything else, but one that asks for your input in the process of Jill’s job requirements. Personally, I enjoyed the drink mixing element because it made the idea of Jill being a bartender more noticeably important to the game, and drove home the fact that this is what Jill does for a living; there’s no swapping the bartending menu for clue collecting or other things, you’re here to make drinks and that’s exactly what you’re going to do. 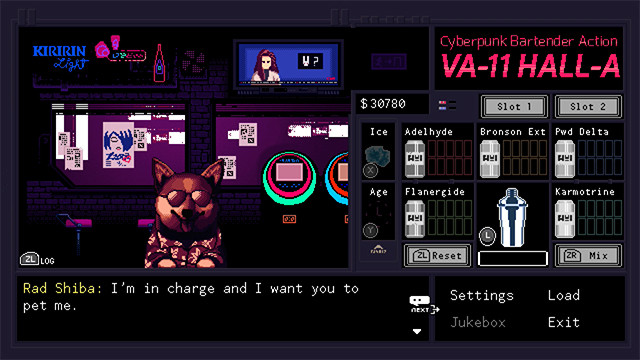 This limitation on what you can do, and why, does bring some interesting quirks to the game. As mentioned, the game has a bevy of interesting and unique characters, many of them with their own problems, struggles, and conflicts that you, as Jill, get to watch unfold from behind your bar. Jill has little ability to impact these character’s lives aside from a few distinct choices in the game that affect the ending, and there are instances where players are left guessing about what happened, and why it happened, to various characters. As mentioned, Jill won’t become the key hero to lead a rebellion against the dystopia, but the game is almost myopically personal at times because of the limit to what you can see and what that means.

For example, without much spoilers, there is a mystery around a key character in the game that appears very early on, but is never fully explained. Even after obtaining a relevant ending, the character’s fate, and overall meaning in the game, aren’t fully explained in a somewhat frustrating way. And, maybe, that’s okay; games tend to overshare frequently, providing far too much information to answer all questions literally, and don’t tend to leave a lot of room for interpretation or even mystery. And, sometimes, we have to admit that unfulfilling story beats might just exist because… the developers forgot about them.  But either way, the game is great, mysteries aside, and in some ways these odd story beat drops fit the fact that just one person can only know and see so much. 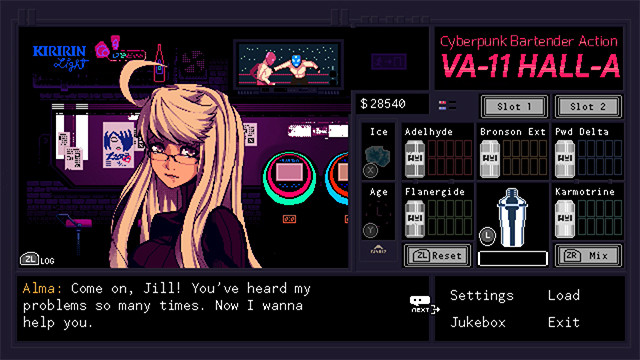 There's so much to love about the world VA-11 Hall-A creates that the unanswered questions it presents might be excused. Jill’s story is a simple, relatable, and emotional one, and the characters that orbit her are similarly interesting and will keep you coming back to the game for more, likely fulfilling special orders to get various endings in the process (there is something of a New Game + mode where money carries over). Something that makes VA-11 Hall-A stand out and worth noting is the representation present in the game, as the game is not shy about the fact that Jill is bisexual, and many of her romantic interests in the game are other women. Although some of the writing is a little odd at times in these segments, I think Sukeban Games did a great job weaving the identity of their character into how the game plays in a way that feels mostly natural and flowing.

Although boob measuring conversations don’t really happen in real life, everything else that Sukeban worked into this game feels absolutely authentic, and helps deepen the connection that you’re viewing the world through Jill’s eyes, rather than playing “as” Jill, and are instead seeing things from her perspective. The rest of the cast are as varied and interesting as Jill is, ranging from a shiba inu named Rad Shiba to a man named after a Seinfeld joke, and the majority of the women in the cast that Jill interacts with and can end up in various endings with sometimes nearly steal the show for how lovable and unique they are. 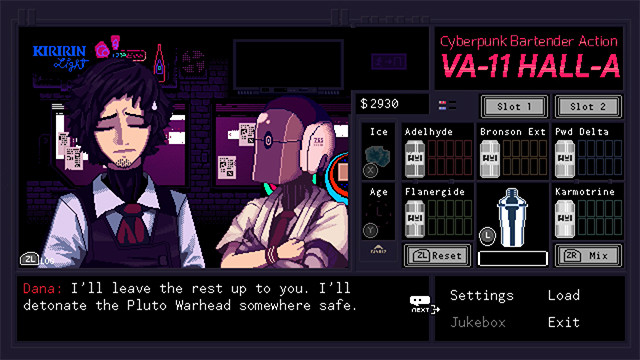 VA-11 Hall-A has a lot of other great touches going for it. The color pallette and themeing in the game really sells the idea of the aesthetic, cyberpunk future bar that you’re inhabiting, with various shades of black, purple, white, and pinks giving off more of a Blade Runner vibe than a Vaporwave one. The music in the game is absolutely fantastic as well, and the jukebox in the game allows you to let music play naturally, or simply find tunes you like and play them through your own fiddling. There are some ways in which this random music playing actually gives some level of atmosphere to the game, as characters talking to you while music that doesn’t match the mood plays in the background, rather than having specific sound cues and design. I would be lying if the game’s OST wasn’t stuck in my head, and believe me, the game is an overall better experience for the fantastic soundtrack than it would be with something different.

This is probably is one of the detriments of playing it on the Switch in handheld mode; you will absolutely want headphones, otherwise you’ll likely not be playing the game with the volume turned up and miss out on the great music! Although not a graphically intensive game, the overall presentation of VA-11 Hall-A is fantastic, and on the Switch the game looked amazing in both docked and handheld mode; I really can’t suggest either is superior to the other, a somewhat great feat when it comes to Switch ports sometimes. Other great touches involve the controls: you have the ability to use gyro controls (which I generally don't really like), touch controls, and stick controls. The touch controls worked perfectly, and I honestly found it my preferred way to play the game overall, as it made progressing dialogue a lot easier and less of a chore; when I got to drink mixing, I would switch to the sticks, and then resume using touch controls for the narrative. These are small, almost cosmetic additions, but they really do help make the Switch version feel fantastic and probably my overall preferred version of the game so far. 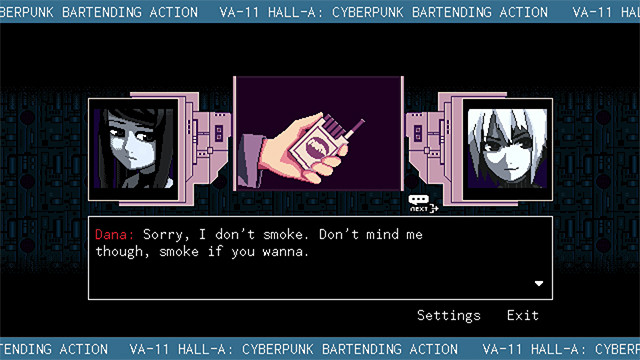 If you’re a fan of visual novels, or simply curious about them, I think VA-11 Hall-A is a great place to look for your next gaming experience. The game will feel right at home to VN fans, with an interesting story and unique twist on the way VNs play, and players who are less familiar with how those games work will probably find the drink mixing mechanic helps alleviate that idea that you don’t “do” anything in them. Either way, if you’re a fan of cyberpunk, bartending, or just cute girls struggling to exist in a dystopian nightmare future over a few drinks, there’s a lot to love here. So pull up a stool, order your favorite drink, and dive in to VA-11 Hall-A; we can promise you won’t need a hangover cure for this drink, cause it goes down smooth!

+ Unique cyberpunk game that puts players in an unusual profession to play as.

+ Switch port is great, playing well in both modes, and touch controls are awesome.

+ Great to see lots of positive, natural representation in this game.

+/- Some story beats don’t quite get explained, which can be puzzling, but ultimately your mileage may vary on if that’s a big deal.

Are you curious to order up at VA-11 Hall-A? Got a favorite drink to enjoy your games with? Let us know what you think of the game in the comments!