Dr. STONE's director speaks on learning how to freeze dry ramen and much more 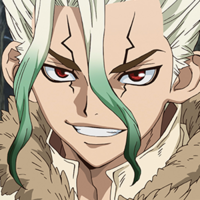 Dr. STONE was one of the most exciting new anime of 2019 and we’re right in the middle of the series’ second season! We were lucky enough to interview series director Shinya Iino and talk about how his team have adjusted to COVID, conducting his own science experiments, and what exactly it means to be the director of an anime series. 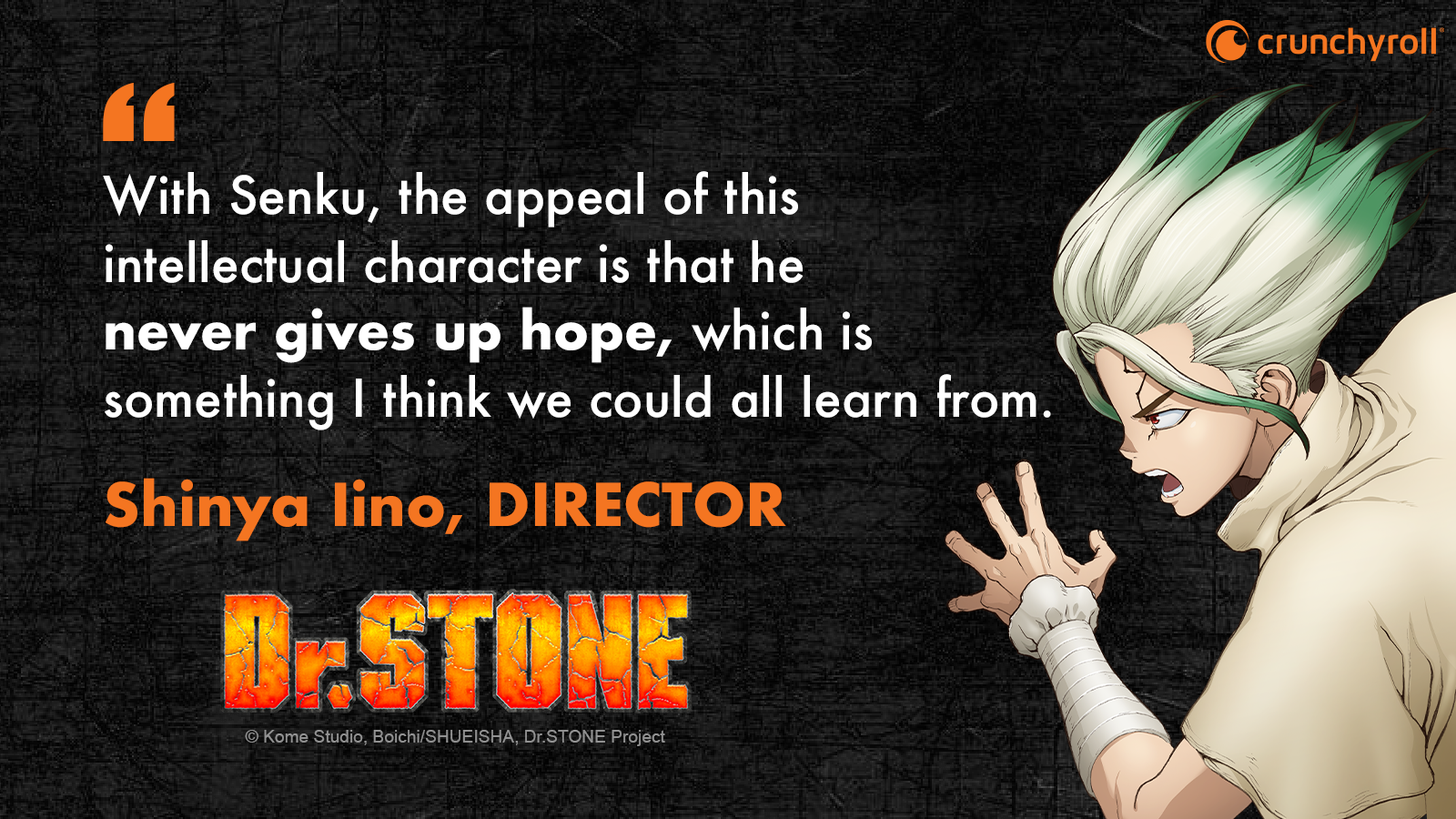 Crunchyroll: What is a day in the life of an anime director like? Is there anything you'd like people to know about it?

Shinya Iino: Well, as far as a day in the life of an anime director goes, the director’s job primarily consists of drawing storyboards, which is what I would say takes up the majority of the time. Other than that, the job involves checking on individual episodes, checking on things like layouts. Then there’s reviewing early footage, and, depending on the day, there’s editing or recording. I feels like you touch a few different episodes every day. I’m not sure what else would be interesting to fans… What kinds of things might they be interested in hearing about?

Well, is there anything that people seem to assume that directors do, but in reality isn't the case?

That's a good question... Being a director is seen as being a pretty lofty position where you get to order everyone around. While that’s not totally untrue, there’s a lot of support involved where you pitch in to help the other staff when they need it.

So it’s almost like you’re being creative, administrative, and even a bit like an HR department, making sure everyone is happy.

I think so. The storyboarding process is probably the most purely creative task. On an episode-to-episode basis, there’s a bit of an oversight aspect to it–I guess you could call it management–where you help with the fine-tuning.

What got you the most excited to return to this world and to these characters?

Well, as far as the second season goes, you get to meet a lot of the characters from the Tsukasa Empire. They’ve already been announced, and three of them are going to be regular additions to the cast. I was really looking forward to getting to draw them. Other than that–and this is almost like unfinished business from Season 1–there’s the conclusion to the conflict with Tsukasa. Getting to depict how his arc comes to a close was something I was happy about. I really wanted to make sure I finished it out. Tsukasa’s depiction, in general, is one of the things I really enjoy about this series and put a lot of effort into. 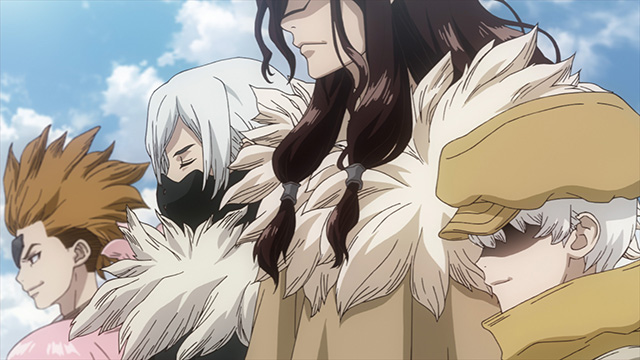 The first season of Dr. STONE was your directorial debut. I wanted to know how you feel you’ve grown as a director since starting out.

Good question! How I’ve grown as a director… hmm, I wonder. Well, one funny thing is that I don’t oversleep as much anymore! I’ve managed to make it to meetings on time and I’ve been a bit more responsible in general. I’m mostly kidding here, though! The way I used to be assigned screenplays and storyboards before directing, I was assigned things one episode at a time, so I used to focus on the job in that order. But this time, to direct a season of 24 episodes, working on multiple episodes simultaneously, there was a lot of trial and error. Through that trial and error, any mistakes become evident really quickly. The response I would get from trying different things out would be really timely on an episode-to-episode basis. So, when it came to the scripts and storyboards, I was able to gradually figure out what points I needed to be most attentive to. I guess you could say getting used to directing was the big thing I gained from working on the first season.

What was the most difficult thing about shifting from an episode-by-episode way of thinking to a more holistic approach?

Figuring out when to compromise was touch, I think. When you’re working as an episode director on an individual half-hour, it’s possible to put your personal touch into every cut of that episode. But when you’re overseeing the entire series, that’s not possible. That’s definitely a dilemma to come to terms with. Figuring out how much effort you can afford to spend with the time that you have… it’s a bit like trying to figure out where your energy is best spent. Or what alterations you can make to best benefit the project. I had to think a lot about that.

The Dr. STONE manga is still ongoing, and I wanted to know how you and your team choose wherein the story to start and finish a season.

Well, when we were planning out the second season, the manga had made a fair bit of progress. It just made sense to segment the story arc where it fell for a single season’s worth of episodes. When the initial proposal was made, the main goal was to cover the Tsukasa Empire story. After that, I spoke with the writer responsible for the series composition and the rest of the writing staff and we had to figure out how to ensure the quality level from episode to episode remained high, like in the first season. We also worked on how to portion out the material from the manga and how many episodes that material would turn into. 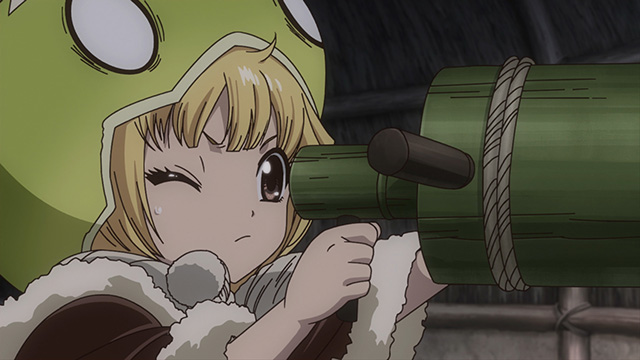 Science is a really unique theme for anime, but the show has been quite successful. What about Dr. STONE do you think connects strongly with anime fans?

I think part of it is what you said, that science is a unique focus for a manga. There’s something universal about science as well. Part of that is having something recognizable no matter where you’re from, and then there’s the fact that it’s a nicely-paced story filled with thrills and excitement in every chapter. I think the biggest thing is the appeal that Senku has as a character that draws fans into the story.

Dr. STONE doesn’t have battle or action sequences–how did your team manage to make science seem so exciting and cool?

This is something I thought about while reading the manga… how it manages to make science seem exciting instead of dour or serious. In the process of making the anime, something I kept coming back to is the tempo of the story or the rhythm it’s told with. Using music to make a scene seem more upbeat or using a lot of quick cuts in the scene to help build a rhythm. That helps assure it remains interesting. Another element is the scenes where characters are using science to make things–they’re always depicted as being really into what they’re doing, so we’re making sure to be careful with animating that. With this anime, we’ve chosen to be careful with animating that. We’ve chosen to be very detail-oriented about how the scientific processes are depicted in order to make sure that it reflects the reality of those elements. But that’s more like a prerequisite and not part of the actual fun. The trick is to show how the characters are enjoying their interactions with realistic science, which then conveys that excitement to the audience. We refer to those sequences as crafting sequences, so it’s all about the sense of excitement the characters feel when crafting. We’re always careful about how we depict that in the anime.

I know your team did a lot of hands-on scientific research for the first season. Did you do the same for the second? If so, what was your favorite thing to research?

Well, for the second season, there was the oscillating engine–basically a car engine. They sell miniatures of those, so we got a hold of one and took a good look at how it moved. That was the main thing. Other than that, in the first episode, there was an anime-original crafting sequence. We have them make instant ramen, and in order to do that, they have to freeze-dry the food, which is literally what it sounds like. We went to an actual factory where they do that sort of thing to see what kinds of materials were involved and experimented with how to make it work well in the anime. While a lot of what we saw didn’t actually make it into the episode, it definitely helped us in terms of getting familiar with the scientific processes. That was pretty interesting. 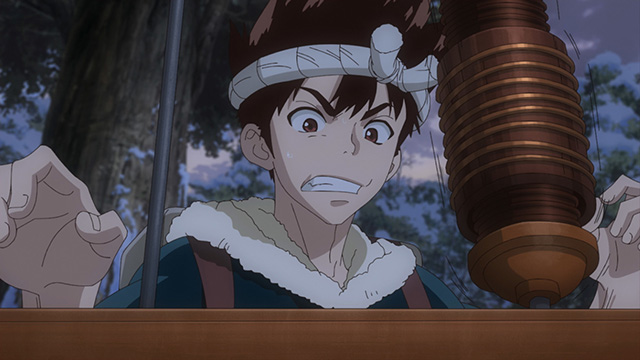 How has your team adapted your work processes for the COVID-19 pandemic?

The biggest change is how the voiceovers are recorded. We used to get the entire cast, 10-20 people, and record in one place, and we can’t do that anymore. So instead, it’s just four at a time, and those groups record their lines separately from each other. As far as the effect it’s had, luckily Dr. STONE had started its recording in summer, so while other projects might have had to stop recording midway or come up with workarounds on the fly, we were luckly enough to benefit from the techniques they came up with. The thing with Coronavirus is that, with the way we have actors recording in smaller groups, it can be harder for the actors to respond to one another based on their performances. With Dr. STONE, though, since it’s a continuation from a previous season, the actors already had a good idea of how each other’s delivery would sound. Because of that, it didn’t prove to be much of a problem during recording, really.

Since all of the animation from storyboards to key animation and other aspects are already digital, does that make it pretty easy to do from home?

As far as storyboards go, I was already working digitally in Season 1. As far as that goes, it’s pretty simple to switch to working from home, and that wasn’t much trouble as a result. Key animation is often still done on paper–there are a lot of people who work that way–so for those cases there’s been a bit of extra work to compensate. Even with my work, the workflow for my checks is digital, but I’ll often print something out and work with the art on paper, so I wouldn’t say things are quite 100% digital yet.

In your opinion, what is the most important theme or feeling you want viewers to come away from this season with?

That’s an interesting question… Season 2 is really about the battle between Senku and Tsukasa, and how it wraps up. This is something that I came to understand while working on this season, but Senku always pursues the ideal solution, no matter how difficult the situation gets, and he never gives up hope. When you look at him, you see his unique hairstyle, and he really seems like a particularly cartoonish manga character. But depicting him, you really get an internal sense of who he is, his feelings, and how authentic they are. And with that in mind, it’s hard to think of a stronger character. The way he always retains high-minded ideals, no matter how trying the circumstances are, is something that the anime and the series, in particular, makes really apparent. With Senku, the appeal of this intellectual character is that he never gives up hope, which is something I think we could all learn from and maybe be inspired by. Dr. STONE Season 2 has the same staff back from the first season, and they’re all working to bring you an even better show this time around, and have spent all year working on it. We hope you enjoy what we have in store for you. Please check out Dr. STONE Season 2 here on Crunchyroll. Thank you very much. 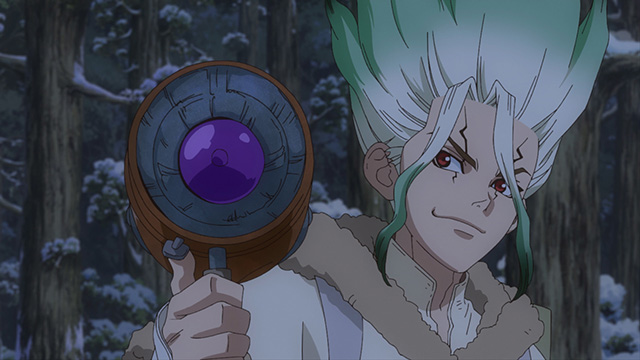