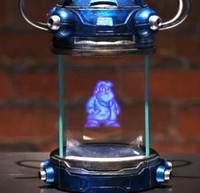 San Francisco's Gauntlet Gallery is host to a cool Mega Man art show all this month. Mega Man Boss Tribute showcases a bunch of drawn and painted artwork that pays tribute to the bosses of Capcom's Mega Man series, but one Mega Man X-centric piece stands out with a clever gimmick.

The Dr. Light Capsule from Mega Man X was created by Andrew Butterworth, who made it appear as if an actual hologram is flickering inside by projecting an After Effects animation loop against transparent glass. Here's how it looks in action:

According to Butterworth, hardcore Mega Man X players in attendance will spot an Easter egg hidden in the loop.