VIDEO: ATLUS Announces "Persona 5" for PS3, "Persona Q: Shadow of the Labyrinth" for 3DS, and More 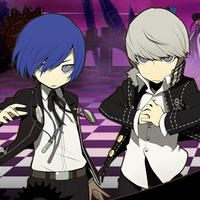 At the end of the three day countdown, ATLUS has unveiled new details for 4 new persona games, all scheduled for 2014 in Japan: Persona 4: The Ultimax Ultra Suplex Hold, Persona Q: Shadow of the Labyrinth, Persona 4: Dancing All Night, and lastly, the highly anticipated Persona 5.

In the Summer of 2014, ATLUS will be bringing Persona 4: The Ultimax Ultra Suplex Hold  to the PS3 in Japan. The newest trailer for the game can be seen below:

The arcade version will be released on November 28th in Japan. More images are available at the official site: http://p-atlus.jp/p4u2/

On June 5th, 2014, ATLUS will release Persona Q: Shadow of the Labyrinth for the 3DS. The game features the Persona 3 and Persona 4 teams chibified in a single game. See the first trailer below:

In Fall 2014 in Japan, ATLUS will release Persona 4: Dancing All Night for the Vita which is co-produced between ATLUS and Dingo. Watch the trailer:

And then finally, ATLUS announced that Persona 5 will be coming out on PS3 in Winter 2014 in Japan with a short teaser:

The teaser site is located at: http://persona5.jp/

Which games are you looking forward to?