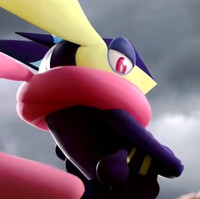 The 3DS version runs at 60 frames per second, all in stereoscopic 3D, and will be receiving an exclusive "Smash Run" mode. In this mode four players have five minutes to enter a dungeon and explore, fighting enemies and grabbing power-ups to enhance their characters along the way. Once the five minutes are up, the four fighters enter a battle arena and duke it out with their new items and power-ups.

A brand new character was announced with the addition of Greninja, the final evolution of Froakie from Pokémon X and Pokémon Y. He joins some returning challengers, including Zero Suit Samus and Sheik, both as unique playable characters this time; Yoshi, who fights standing completely upright; and Charizard, who is now a selectable character.

Here are the rest of the details straight from Nintendo, from online play—including "For Fun" and "For Glory" battle modes—to interactive boss characters in stages, new assist trophies, and more.