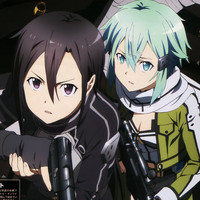 Self-described "gun maniac" and Kino's Journey author Keiichi Sigsawa (a name adopted to pay tribute to SIG Sauer)  has been overseeing depiction of firearms in the Sword Art Online II anime. It turns out that was just a prelude to their involvement in Sword Art Online. Next up is spin-off/alternative Sword Art Online's Gun Gale Online "Squad Jam."

Kohiruimaki Karen is a college student with a height of 183cm.
Always suffering from a complex because of her height since puberty, she could never socialize in the real world. What changed her life was the VRMMO Gun Gale Online, a game that gained popularity after the "SAO Incident".
With her ideal virtual chibi avatar, that doesn't even have a height of 150cm, Karen wears a pink combat armor and runs around the world of Gun Gale Online as the player "Ren".
In front of Ren suddenly appears a beautiful female player with dark skin called "Pitohui" - but when she thinks she has found a friend in GGO, where female players are extremely rare...

One day, the Squad Jam, a battle royal tournament based on BoB, catches Pitohui's attention...

----
Scott Green is editor and reporter for anime and manga at geek entertainment site Ain't It Cool News. Follow him on Twitter at @aicnanime.