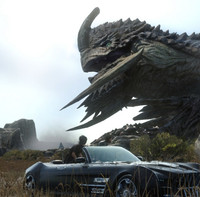 We now know we can look forward to the Final Fantasy XV Episode Duscae demo when Final Fantasy Type-0 launches next March. There's more interesting news on the next game out of this week's Tokyo Game Show event, though, with Square Enix announcing that Tetsuya Nomura is no longer the director.

With Nomura stepping away to focus on other projects, Final Fantasy Type-0 and Before Crisis: Final Fantasy VII director Hajime Tabata is taking his place.

According to a statement from Square Enix CEO Yosuke Matsuda, Nomura's efforts are shifting to "production of titles that can only be made possible by Nomura himself," such as the also long-awaited Kingdom Hearts III.

The final moment of the Tokyo Game Show trailer sums up the FFXV development cycle nicely.