In January, Walt Disney Pictures announced that the Rupert Sanders-directed film is set for release in the U.S. on April 14, 2017 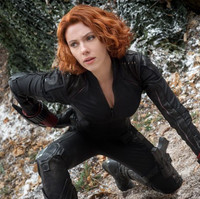 With the AmeComi inspired Avengers: Age of Ultron hitting theaters May 1st, the movie's super heroine Black Widow, Scarlett Johansson, has commented on her upcoming manga project. In regards to the live-action, Hollywood Ghost in the Shell, ScarJo is quoted as saying, “It’s happening. It will be shooting the beginning of next year, so I think we start production January or February and it’s me and Rupert [Sanders]; and that’s all I know.”

In January, Walt Disney Pictures announced that the Rupert Sanders-directed film is set for release in the U.S. on April 14, 2017, one week after Guillermo del Toro’s Pacific Rim 2. It will be Sanders' second feature film after Snow White and the Huntsman in 2012. Avi Arad and Steven Paul serve as producers, William Wheeler (The Reluctant Fundamentalist) writes the script.