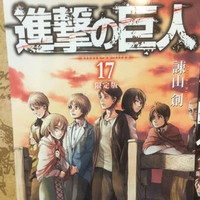 Shintaro Kawakubo (aka Back), the editor at Kodansha in charge of Hajime Isayama's mega hit manga series Attack on Titan, today officially posted a photo of the cover of the upcoming 17th volume, which is scheduled to be released in Japan on December 9. Its 1,058-yen limited edition comes with the 1st volume of the Kansai-ben/dialect version and nine-type of clear bookmarkers printed with the characters' famous lines in various Japanese dialects, for example, Koushu dialect for Levi and Hakata dialect for Erwin.