RPG will be available at a discount for a limited time 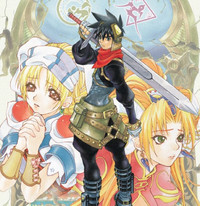 Originally released a whopping 15 years ago on Dreamcast, Grandia II is a beloved RPG that's making its way back in enhanced form. Grandia II Anniversary Edition is coming to PC via Steam and GOG.com on August 24, and for a limited time it will be discounted to $14.99 from its standard $19.99 price.

Some of the new features in Grandia II Anniversary Edition include updated graphics, a harder difficulty level, controller support, and a Japanese voice track.