"Yu-Gi-Oh! The Dark Side of Dimensions" Partners with Six Flags for Holiday Promotion

North American theatrical premiere is on the way in January 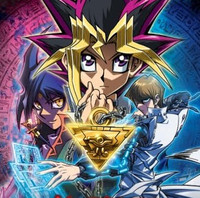 Last month we posted about the international theatrical plans for Yu-Gi-Oh! The Dark Side of Dimensions, which will make its North American debut in January. Ahead of its premiere, 4K Media announced plans for a special new holiday promotion in collaboration with Six Flags theme parks.

There will also be volunteers on hand to teach visitors how to play the Yu-Gi-Oh! trading card game. Those who want to check out the "Demo Days" can do so on Saturday and Sunday, December 10 and 11, followed by a repeat opportunity on December 17 and 18.

Here's a synopsis of the latest movie:

In Yu-Gi-Oh! THE DARK SIDE OF DIMENSIONS, the stakes have never been higher; the rivalries never as fierce; the risks never so great. One wrong move—one card short—and it’s game over for good. A decade in the making, Yu-Gi-Oh! THE DARK SIDE OF DIMENSIONS features new designs and an all-new story from the original creator of the global phenomenon, Kazuki Takahashi. His masterful tale features anime’s most beloved characters in their long-awaited return: Yugi Muto, Seto Kaiba and their faithful friends Joey Wheeler, Tristan Taylor, Téa Gardner and Bakura. It’s the most highly anticipated re-YU-nion ever!