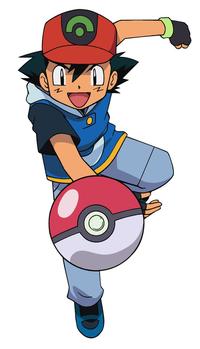 Condividi questa pagina:
InfoPhotos (0)Reviews (0)Forum (0)Fans (11)Comments (1)
[Modifica]
Panoramica
Ash Ketchum, known as Red in most localized video game and manga appearances and Satoshi (サトシ?) for all appearances in Japan, is a fictional character in the Pokemon franchise owned by Nintendo. Created by Satoshi Tajiri as the protagonist of the video game Pokémon Red and Blue, the character has since appeared as the protagonist of the related anime and manga series, as well as on various merchandise related to the franchise. In Japanese, the character is voiced by Rica Matsumoto; in English, he was voiced by Veronica Taylor until the eighth season of the anime series, replaced by Sarah Natochenny for the remainder of the anime and Kayzie Rogers in the The Mastermind of Mirage Pokémon television special.

His dream is to become the greatest Pokémon Master in the world. The family name "Ketchum" is a pun on the 4Kids series' franchise's former tagline and slogan, "Gotta catch 'em all"!

Named after his and Pokémon series creator Satoshi Tajiri, Satoshi was designed by Ken Sugimori and Atsuko Nishida, and intended to represent how Tajiri was as a child, obsessed with collecting creatures. He first appeared as the player-controlled protagonist, in Pokémon Red and Blue, assuming the role of a Pokémon Trainer whose goal is to capture and train creatures called Pokémon, and use the creatures' special abilities to combat other Pokémon, or utilize them for new ways to navigate the game's world, such as instantaneous travel between two areas. An animated adaptation of the games later followed, with the character voiced by Rica Matsumoto and redesigned by Sayuri Ichishi.

During localization of both for North American audiences, the character's name was changed in the anime to "Ash Ketchum", the first name taken from one of the possible default names players could select for the character in the games, and the surname tying into 4Kids former tagline for the series, "Gotta catch 'em all!" In regards to the video games however, the character was unnamed, until the release of Pokémon Gold and Silver, in which the localized character name was changed to Red, tying in both with the original game appearance and one of the possible default names players could select in those titles.

Tajiri noted in an interview that between Japanese and American reactions to the series, Japanese consumers focused on the character Pikachu, while Americans purchased more items featuring Ash and Pikachu together. He stated that he felt the character represented the concept of the franchise, the human aspect, and was a necessity. In both the games and anime, the character was given a rival, Shigeru. In an interview Tajiri noted the contrast between the character's relationship in the games and anime; while in the games they were rivals, in the anime, Shigeru representend Satoshi's master. When asked if in either instance Satoshi would surpass his rival, Tajiri replied "No! Never!"