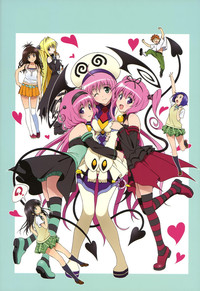 Condividi questa pagina:
InfoPhotos (0)Reviews (0)Forum (0)Fans (56)Comments (8)
[Modifica]
Panoramica
To Love-Ru (とらぶる, Toraburu?) is a Japanese manga series written by Saki Hasemi, and illustrated by Kentaro Yabuki, creator of Black Cat. The manga was serialized in Shueisha's manga magazine Weekly Shōnen Jump between April 24, 2006 and August 31, 2009; 18 tankōbon volumes have been published in Japan. A continuation of the manga called To Love-Ru Darkness began serialization in Shueisha's Jump Square magazine on October 4, 2010. A drama CD was released in February 2008 with an original story. A twenty-six episode anime series adaptation by Xebec aired in Japan between April and September 2008. A video game was released on the Nintendo DS in August 2008, and another game for the PlayStation Portable was released in October 2008. The title, とらぶる (Toraburu?), is wasei-eigo for "trouble" and "rabu" (ラブ?) is wasei-eigo for "love". The title is a pun on the words "love trouble", which describes the harem aspect of the series.

The story of To Love-Ru revolves around Rito Yūki, a high-school student who cannot confess to the girl of his dreams, Haruna Sairenji. One day when coming home and sulking in the bathtub, a mysterious, nude girl appears out of nowhere. Her name is Lala and she comes from the planet Deviluke, where she is the heir to the throne. Her father wants her to return to her home planet so she can marry one of the husband candidates. But she decides that she wants to marry Rito in order to stay on Earth. Commander Zastin has been ordered to bring Lala back and has already battled Rito. He reports to the emperor that Rito would be suited to marry Lala, after hearing Rito, who was actually defending himself instead of Lala, says that marriage is impossible unless it is with the person you love. Lala truly falls in love with Rito and decides that she wants to marry Rito after hearing what he said. Her father decides that, if Rito is able to protect Lala from her fiancés, then he can marry her, but if Rito cannot protect Lala from her other fiancés and meet the king's expectations, Lala's father will kill Rito and destroy the Earth.

To Love-Ru began as a manga series written by Saki Hasemi with illustrations by Kentaro Yabuki. The manga was serialized in Shueisha's manga magazine Weekly Shōnen Jump between April 24, 2006 and August 31, 2009. Eighteen bound volumes were released by Shueisha in Japan between November 11, 2006 and April 2, 2010. A spin-off named To Love-Ru Darkness (ToLOVEる-ダークネス-, ToLOVEru -Dākunesu-?) began serialized on October 4, 2010 in Jump Square.

A drama CD for To Love-Ru was released on February 29, 2008 with an original story, featuring the voice cast used in the anime, along with character songs.

An anime series adaptation produced by Xebec and directed by Takao Kato aired in Japan between April 3 and September 25, 2008, and contains twenty-six episodes. The anime uses characters and general themes from the original manga, it captures various chapters and events from the manga in no specific order. The anime's opening theme is "Forever We Can Make It!" by Thyme, the first ending theme for episodes one through thirteen is "Lucky Tune" (ラッキーチューン, Rakkī Chūn?) by Anna, and the second ending theme is "Kiss no Yukue" (kiss の行方?), also by Anna. Three original video animation episodes were shipped starting on April 3, 2009 with pre-ordered copies of the manga's thirteenth volume and continue through the fourteenth and fifteenth volumes. An additional three OVA episodes were released with the bundled version of the sixteenth, seventeenth and eighteenth volumes. The anime is licensed in North America by Sentai Filmworks and distributed by Section23 Films. The complete collection part one containing the first half-season was released on December 15, 2009. Following the release of part two in February 2010, the series began playing on the Anime Network in March 2010. Part two containing the latter half-season was released on February 16, 2010. A second season titled Motto To Love-Ru will air in October 2010.