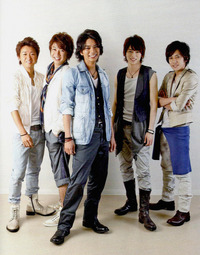 Arashi is a five-member Japanese boy band under Johnny & Associates. They made their debut in September 15, 1999 in Honolulu, Hawaiʻi. The group was signed to the Pony Canyon record label from 1999 to 2001 before transitioning to Johnny's Associates-powered J Storm record label in 2002, producing their future singles and albums.
--Wikipedia

[Edit]
Extended Information
Arashi covers a wide range of music, including R&B, hip hop and various forms of pop music. Aside from being a popular idol group in Japan, the group is widely known across Asia and to J-pop fans all over the world.

Johnny's & Associates (or Johnny's) announced the group's debut on September 15, 1999 through a press conference aboard a cruise ship off the coast of Honolulu, Hawaiʻi. Arashi, the Japanese word for storm, was chosen by Johnny's to represent the group's thrust of "creating a storm throughout the world." Arashi is currently the only debuted group in Johnny's that is written entirely in Kanji. Their debut single, "Arashi", became the theme song for the 8th World Cup of Volleyball hosted by Japan in 1999. They gained widespread exposure when they sang their debut single at the cup's opening on November 2, 1999. At the debut event a day later, an estimated 80,000 fans showed up at the Yoyogi National Hippodrome to see the group's live performance. The single went on to become a major hit, selling almost a million copies. From March 25 to April 30, 2001, the group embarked on their first nationwide tour, the Arashi Spring Concert 2001. The tour took place in Sendai, Osaka, Nagoya, Hokkaido, Fukuoka, Hiroshima, Kanazawa, Toyama and Tokyo with an unprecedented 26 performances. March 2002 saw the group's return to Hawaiʻi, with a series of fan tours, as a part of Johnny's Stand Up Hawaiʻi! Campaign.

By 2006, the group's singles and albums were being released outside Japan. Their album, Arashic, was released not only in Japan, but in Hong Kong, South Korea, Taiwan and Thailand as well. In Korea, the album proved so successful, the first 10,000 copies of the album were sold out on the first day, and it even topped the non Korean sales charts on the third week of July. On July 31, 2006, the group embarked on their Jet Storm Tour, which aimed to promote the album. The one-day tour covered Taiwan, Thailand and South Korea, countries which later became part of their Asia tour (The Thailand concert, Thai-J Pop Concert, was canceled due to a military coup).

The concert in Korea was decided because about 1,500 Korean fans gathered at the Incheon International Airport during the group's Jet Storm press conference. The concert, held on November 12, 2006, made Arashi the first group from Johnny's Entertainment to perform an individual concert in South Korea. The group proved popular to Korean fans when their concert tickets were sold out in an hour, as some 150,000 people rushed to book tickets online. Aside from their concert performances, the group represented Japan in the 2006 Asia Song Festival, also held in South Korea.

On February 21, 2007, the group released their first single of the year 2007, "Love so sweet", the theme song for the high-rating television drama Hana Yori Dango 2 which peaked at the number one spot on Oricon's daily and weekly charts. Their nineteenth single, "We Can Make It!", released on May 2, 2007, also charted number one on Oricon's daily and weekly charts, before falling out of the Top 10 in its second week, only to return back to the Top 10 on its third week. On April 2007, the group performed in one of their largest concerts to date: Arashi Around Asia in Dome, which was a continuation of their Triumphant Homecoming concert, aimed to celebrate the successful Asian tour held in January 2007. A huge number of fans balloted for the January concerts so it was decided that they will hold a dome version of the concert. Arashi Around Asia in Dome was held in Kyocera Dome in Osaka, and at the Tokyo Dome, with a combined total capacity of 100,000 people, and had an attendance of over 200,000.

Their ninth studio album, Time released in July, continued the group's string of number one releases, selling over 190,000 copies in its first week and even reaching the number two spot on the United World Rankings. Also in July, saw the premiere of the TBS drama production of the manga, Yamada Taro Monogatari starring members Kazunari Ninomiya and Sho Sakurai. The theme song of the series, "Happiness", was sung by the group and also debuted at the top spot of the Japanese single charts. The year proved successful for the group, with all of their singles at the Top 30 of the annual Oricon charts, with "Love so sweet" ranking 4th in single sales overall.

The group's success in 2007 sparked renewed interest, with two major announcements in February 2008. The first was the announcement that the group will be doing a concert tour of the five major domes in Tokyo, Nagoya, Osaka, Fukuoka, and Sapporo. The tour, titled ARASHI Marks 2008 Dream-A-live, consists of 10 performances, from May 16 in Osaka to July 6 in Sapporo. The only other Johnny's artists who have done a five dome tour are SMAP and KinKi Kids. The second announcement was from the Japanese television network TBS, announcing that the group will host a variety show dealing with social and cultural topics on its primetime line-up as a part of its programming strategy after concerns about falling ratings. The show which is entitled Himitsu no Arashi-chan ("Arashi-chan's secret"), will air 10:00 JST, starting on April 10, and will be produced by Saori Hirata. It will the be the first variety show hosted by the group to be aired in primetime. As a publicity campaign for the show, the group appeared in a TBS Tokyo Friend Park Special on March 31, which became the most-watched non-drama primetime program that night, registering a viewership rating of 19.7%. Arashi was the third musical group (after SMAP and Dreams Come True) to perform at Tokyo's National Stadium in their first major outdoor concert on September 5, 2008 as the start of the group's second Asia tour, which included Taipei, Seoul, and Shanghai; Johnny & Associates' first concert in China. 2008 proved to be a successful year for the group with their 23rd single, "Truth/Kaze no Mukō e", topping the Oricon singles chart for the year with "One Love" coming second for the year. They are the first artist since 1989 to take the top two placings on the charts. Their 24th single, "Beautiful Days", also placed as the 10th best selling single of the year.

Spoiler Alert! Click to show or hide
Satoshi Ohno, the oldest member of Arashi, is the reluctant "leader" of the group after winning against Sho Sakurai in a round of rock-paper-scissors with the other members on a Japanese variety show. The exact same pattern of him unwillingly 'winning' against Sho has been seen repeating many times ever since. He is the oldest person in the group and Ohno sings the lead vocals. Although he has stated that he wanted to avoid becoming the leader the most, Arashi members have once stated in an interview that Ohno is a new-age idol, who leads his group by not leading at all. Aside from leading the vocal work, he is known to be the best dancer and has the greatest control when it comes to singing in Arashi. Back when Arashi first debuted and before he was elected leader, Ohno was told by Johnny's to be the "Dance Leader". He choreographs several of their dance moves, which the other members sometimes find quite hard to follow. Other artistes from the same company openly expressed their admiration for Ohno's dancing; among them are Imai Tsubasa of the duo Tackey & Tsubasa, Kokubun Taichi of TOKIO, Yuuri Chinen of the newly-debuted group Hey! Say! JUMP, and other juniors. He is also one half of the Arashi skit duo Ohmiya SK, partnering Kazunari Ninomiya. Out of all the members, he has appeared in the fewest dramas, preferring to do stage plays or focus on his art. He performed his first solo concert on January 29, 2006. He became the first artist in Johnny's who held an art exhibit, which was entitled, "Freestyle".

Spoiler Alert! Click to show or hide
Sho Sakurai sings most of the rap parts (known to fans as "Sakurap"), the lyrics of which he also writes. Sakurai was the first in the group to perform in a solo concert, The Show, on January 14, 2006. He is currently a Monday co-host of NTV's News Zero, on which he became the first idol to host an election special. Sakurai is arguably the best-educated member of the group, having graduated from Keio University, a prestigious Japanese university. During the early years after Arashi's debut, Sho was appointed by the Johnny's to be the "Study Leader". Although he lost in a round of rock-paper-scissors, hence excusing him from being the group's leader, the other four of Arashi have made many remarks that Sakurai is the one who possesses leadership qualities.
Masaki Aiba (相葉雅紀)

Spoiler Alert! Click to show or hide
Masaki Aiba is the tallest member of the group, with a distinctive breathy voice. He was once hospitalized after fainting due to the collapse of one of his lungs and was forced to stop playing the saxophone due to the operation he had to undergo. Aiba interacts with various wild animals as a co-host of the TV show, Tensai! Shimura Doubutsuen. He also excels in sports, especially basketball. He has been known to have considerably short attention span and often jumps between topics during talks and interviews, thus earning himself his reputation as the endearing, flaky member of Arashi. Sometimes Aiba makes some mistakes with Japanese, particularly in reading kanji. He can be seen making various reading mistakes in talk shows and live performances. During the earlier years following Arashi's debut, Aiba was appointed the "Image Leader" of Arashi.
Kazunari Ninomiya (二宮和也)

Spoiler Alert! Click to show or hide
Kazunari Ninomiya, nicknamed Nino, is the first member of the group to crossover to American films as he starred in Clint Eastwood's critically acclaimed Japanese language film, Letters from Iwo Jima. Along with bandmate Jun Matsumoto, he is one of Japan's leading young actors and have been said to be able to "act with his eyes". Ninomiya stated that he is left-handed but has been forced to write with his right hand by his parents when he was a child. He plays the guitar, piano, composes songs and write lyrics. However, he is usually seen with a game console in hand instead and had publicly admitted that he was an otaku when he was an elementary school student. During Arashi's early years, Johnny's appointed Ninomiya as the "Performance Leader".
Jun Matsumoto (松本潤 ?)

Spoiler Alert! Click to show or hide
Jun Matsumoto, nicknamed Matsujun, is the youngest member of Arashi. Matsumoto is known for his starring roles in dramas such as Bambino, Hana Yori Dango, Hana Yori Dango 2, Kimi wa Petto, and Gokusen. He is the first Japanese male to grace the cover of Marie Claire Japan. Ohno has labeled him the "concert master" because of his take-charge attitude and attention to detail during their live performances. During the years after their debut, he was appointed by the Johnny's as the "Comedy Leader". By now he has more or less lost the comedic image and has even gained the nickname DoS from the other members (S standing for 'Sadist' and Do means 'extreme' in Japanese Kanji). Jun is one of the three idols who are considered elites in the Johnny's because he was called to join the company by Johnny Kitagawa himself, without having to go through auditions. Matsumoto won the GQ Man Of The Year Award under the Singer/Actor category.
Aside from their music careers, Arashi members have also appeared in movies, special variety programs, commercials, stage plays, and various television dramas. Currently, they are also the hosts of two variety programs, Arashi no Shukudai-kun and Himitsu no Arashi-chan as well as a game show, VS Arashi.