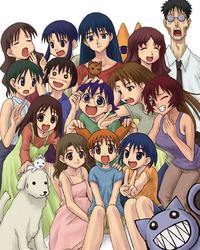 Azumanga Daio also appeared as a short online movie, know as Azumanga Web Daio. Apparently they were also giving out free DVD of a short movie in March and April edition of Dengeki Daio magazine.

[Edit]
Production Information
Azumanga Daioh is a Japanese comedy manga created by Kiyohiko Azuma. It was serialized by MediaWorks in the shōnen manga magazine Dengeki Daioh from 1999 to 2002 and collected in four bound volumes. In May 2009, in conjunction with the 10th anniversary of the manga, three additional chapters began serialization in Shogakukan's Monthly Shōnen Sunday under the title Azumanga Daioh: Supplementary Lessons. It was adapted as an anime television series called Azumanga Daioh: the Animation by J.C.Staff, which aired from the week of April 8, 2002 until the week of September 30, 2002. It was broadcast on the TV Tokyo network and AT-X in five-minute segments every weekday, then rebroadcast as a 25-minute compilation that weekend, for a total of 130 five-minute segments collected in 26 episodes.

Besides the television anime, there have been two other animated adaptations: The Very Short Azumanga Daioh Movie, a six minute trailer released to movie theaters to publicize the upcoming television series, and Azumanga Web Daioh, a shorter pilot episode that appeared on the official Japanese Azumanga Daioh website for a limited time. Azumanga Web Daioh was originally intended to gauge whether there was enough interest to create a web-released anime adaptation; because of overwhelming demand, the original plan for web-release was changed to a television release. It featured different voice actors and music from the regular series.

Plot Information
Azumanga Daioh chronicles the everyday life in an unnamed Japanese high school of six girls and two of their teachers: child prodigy Chiyo Mihama and her struggle to fit in with girls five years older, reserved Sakaki and her obsession with the cute animals who seem to hate her, spacey Ayumu "Osaka" Kasuga with a skewed perspective on the world, Koyomi "Yomi" Mizuhara's aggravation at an annoying best friend, Tomo Takino, whose energy is rivaled only by her lack of sense, sporty Kagura and her one-sided rivalry with Sakaki, and their homeroom teacher Yukari Tanizaki and her friend, physical education teacher Minamo Kurosawa. Secondary characters include Kimura-sensei, a creepy male teacher with an obsession with teenage girls, and Kaorin, a classmate with a crush on Sakaki.

The story covers three years of tests, talking between classes, culture festivals, and athletic events at school, as well as time traveling to and from school, studying at Chiyo's house, and vacations spent at Chiyo's summer beach home and the fictional theme park Magical Land, concluding with the graduation of the main cast. It is generally realistic in tone, marked by occasional bursts of surrealism and absurdity, such as Osaka imagining Chiyo's ponytails being "unscrewed" from her head and an episode featuring the characters' New Year's dreams.

Main Characters Information
Chiyo Mihama
Usually called Chiyo-chan, is a child prodigy, having skipped five grades to 10th grade at the start of the series, yet she is still top of the class. Such grade-skipping would be unthinkable in Japan, and the series humorously explores its potential consequences. The other characters find Chiyo amazingly cute, but sometimes take advantage of both her youthfulness and her scholastic abilities. Her diminutive stature leads to her having a lack of confidence, particularly in sports where she fears she is a burden to others. Chiyo is frequently viewed with jealousy by fellow students, initially because of her intelligence, but later also because of the discovery that her family is exceedingly wealthy. The stylistic rendering of Chiyo's pigtails allow for several visual gags in both the manga and anime: Osaka often imagines them to be flapping wings, or even entities independent of Chiyo herself. At home, she can almost always be found in the company of her enormous dog, Tadakichi-san. Of all of the girls, she is the only one who does not sit through college entrance exams, as she intends to study overseas.

Tomo Takino
She is extremely energetic and competitive, despite being nonathletic and a slacker at the same time. She tends to irritate everyone around her, especially Yomi, who has been her classmate since elementary school. Tomo's character is extremely impulsive and never considers nor cares about the consequences of anything she says or does. During the second trip to Chiyo's summer house, Tomo actually grabbed Chiyo's house keys and threw them into the forest because she wanted to see what would happen if they had lost them which, of course, was a very bad idea. However, on the occasions when Tomo has actually been inspired to concentrate on something, she has demonstrated that she is quite capable. She succeeded in gaining the grades needed to qualify for the same high school as Yomi, though it was only after Yomi ridiculed her and openly said that there was no way that she could do so. Once Tomo began attending high school however, she returned to her lackadaisical ways.

Koyomi "Yomi" Mizuhara
Commonly known as Yomi, is a grade-school friend and general antithesis of Tomo. She is the voice of reason of the series, carrying herself as the most mature and serious of the group. Though smart and athletic, she is constantly dissatisfied with herself due to her weight and is always trying various diets in an effort to become thinner. She can never seem to stick to these diets however, as she finds herself constantly tempted by her favorite foods. Another weakness of Yomi's character is that while she is above average in everything else, she is an awful singer, yet karaoke is one of her favorite pastimes. While usually functioning as Tomo's "straight man", she sometimes manifests a rather cruel sense of humor. Compared to most of her peers, Yomi uses more masculine Japanese speech patterns, especially when dealing with Tomo's antics. Yomi also has an uppercut that Tomo is usually on the receiving end of whenever she pushes Yomi too far. However, even though she likes to think that she is well above the immature behavior of some of her classmates, Yomi has demonstrated on certain occasions that she can be just as childish as the rest of the characters, such as trying to get Chiyo to infuse a shrine charm with some of her intelligence so that she could pass her college entrance exams.

Sakaki
Is a tall, soft-spoken girl uncomfortable with her height and busty physique. Because she is so shy, she seldom speaks, and her reticence is misinterpreted as mysterious, or cool. This reputation has been compounded by the fact that most of the school's sports teams try to recruit her every year in the story because of her natural athletic ability, but, for the most part, she has no real interest in sports. In contrast to what the other students think of her, Sakaki is in reality a very emotionally sensitive person who holds a secret longing for all things cute. She loves cats, but the neighborhood cats dislike her, and her parents do not allow cats in their house because of her mother's allergies. Sakaki ends up spending a lot of time with Chiyo upon finding out that Chiyo's dog, Mr. Tadakichi, will let her pet him. This friendship actually shows the irony of their circumstances, as Sakaki wishes she looked more like Chiyo and Chiyo wishes that she looked more like Sakaki. Later in the series, Sakaki also befriends an Iriomote kitten that she meets on a side trip to Iriomote Island during a class trip to Okinawa. Later, the kitten loses its mother and proceeds to seek out Sakaki in Tokyo. Since Sakaki was in danger with the neighbor cat leader and the cat's kitty band, the kitten saves her and they soon become close friends.

Ayumu "Osaka" Kasuga
Commonly known as Osaka, is a transfer student from Osaka. Tomo, expecting her to act like the stereotypical Osakan, quickly chose for her the nickname "Osaka", although Ayumu's behavior could not be more different from the "typical" Osakan. Ayumu considers her label "too simple" and "icky," but she lacks the energy or motivation to dispute it. Unlike the stereotypical Osakan, she seems slow and easily distracted, but she merely has a mind that works quite differently than most people. This makes her prone to daydreaming, absentmindedness, and non-sequiturs, but it also makes her unusually good at answering very specific types of riddles. She is also easily amused by things that most people would consider bizarre. During the Sports Festival, she had made a big deal out of running the obstacle course because she thought the event of sticking her face in flour to get a piece of candy was funny and had a giggle fit when she got there. The manga also revealed that she actually likes to run outside and play in typhoons. Her unusual way of thinking gives her a very vivid imagination and a unique way of seeing the world that could actually be considered quite intelligent in its own way.

Kagura
Is a later acquaintance, joining Yukari's class in the 2nd year. She was originally in Nyamo's class and displays a very competitive spirit with her peers in all things. She devotes most of her time to the swim team but is an all-around good athlete, and genuinely nice to her classmates. She has a slight obsession with Sakaki, with whom she sees as an athletic rival. This is mostly due to the fact that while Kagura trains constantly to stay in shape, Sakaki is a naturally gifted athlete with no training at all. Like Tomo, Kagura tends to be quite impulsive in her actions. With the arrival of Kagura, the "Bonkuras" are formed along with Tomo and Osaka, their name for a trio of underachievers. Kagura has a sensitive side, which the audience sees in episode six of the anime following her homeroom's defeat in the sports festival, and the final episode following graduation. Kagura and Yukari enjoy playing video games. Like Sakaki, she is quite busty, but more tomboyish. She has also made it perfectly clear that she will not tolerate the antics of Mr. Kimura.