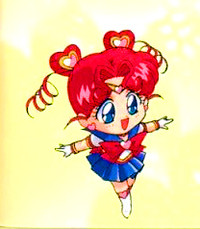 Share this page:
InfoPhotos (24)Reviews (0)Forum (0)Fans (6)Comments (1)
[Edit]
Overview
Chibi Chibi is a powerful Sailor Guardian, seemingly trapped in the body of a two year old girl.
[Edit]
Extended Information
Chibi Chibi (ちびちび, Chibi Chibi?) is a fictional character in the fifth story arc of the Sailor Moon metaseries. She first appears in Act 44 of the manga and Episode 182 of the anime, posing as Usagi's long forgotten "little sister" and taking residence in the Tsukino household.

Chibi Chibi appears to be about two years old, and seldom puts together full sentences, though she knows a few simple words and likes to repeat what other people say. In the manga, she mostly imitates the ends of others' sentences; in the anime, she mostly says "chibi". Her red-pink hair is always up in two heart shaped odango with little ringlets sticking out the sides, echoing the hairstyle of protagonist, Usagi Tsukino.

Chibi Chibi's name is a doubling of the Japanese term meaning "runt," "dwarf," or "shrimp," and is used both for that reason and because of Chibi Chibi's similarity to Chibiusa. It is also a pun, as the word chibichibi also means "making something last". When Tokyopop announced it was translating the 'Stars' arc of the Sailor Moon manga, Chibi Chibi's English name was initially RiRi (a diminutive of Rini, itself a diminutive of Serena), though this idea was soon dropped. This name has appeared on plenty of fan-custom bootlegged dolls, and other knock-off merchandise in North America, despite her name being consistently "Chibi Chibi" in the west.

As her presence in the story increases, Sailor Moon and the other Sailor Guardians debate on what her true identity is, knowing that Usagi's mother Ikuko never had any more children after Usagi and her brother Shingo. The girls question if Chibi Chibi is Usagi's second child (later revealed in the manga Parallel Sailor Moon to be Kousagi Tsukino) or if she is Chibiusa's daughter. But Chibi Chibi's true identity varies sharply between the anime and manga, and neither is revealed until the final Arc and episodes, respectively.

In the manga Pretty Guardian Sailor Moon #12, on pages 220-221 she becomes Sailor Cosmos, then between pages 243-250 she reveals herself to be an alternate form of Usagi, representing what would happen if Usagi ran away from the fight with Chaos.

In the final episodes of the Sailor Moon Sailor Stars/Stars anime, Chibi Chibi is revealed to be Sailor Galaxia's Star Seed. She is called "The Light of Hope" and exists as the last remains of Galaxia's pure side. Galaxia unwittingly created her by forcing her own Starseed out of her body, the day Chaos took control of her.

Chibi Chibi's name and appearance do change slightly between the manga and the 1996-1997 anime.

In the manga, her hair is dark pink, then become silver/white as Sailor Cosmos. This is in relation to Usagi, as Usagi was originally drawn with pink hair, and when she becomes Princess or Neo Queen Serenity, her hair becomes sliver/white, a trait Chibiusa also has in her adult form as Princess Lady Serenity.

In the anime however, Chibi Chibi's hair is generally bright red, reflecting the red tips in Galaxia's hair.