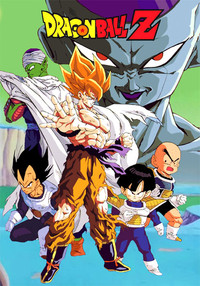 Share this page:
InfoPhotos (112)Reviews (14)Forum (112)Fans (673)Comments (551)
Related Media
[Edit]
Overview
In Dragon Ball Z, Goku is back with his new son, Gohan, but just when things are getting settled down, the adventures continue. Whether he is facing enemies such as Frieza, Cell, or Buu, Goku is proven to be an elite of his own and discovers his race, Saiyan and is able to reach Super Saiyan 3 form. He meets many new people, gaining allies and well as enemies, as he still finds time to raise a family and be the happy-go-lucky Saiyan he is.
[Edit]
Extended Description

Dragon Ball Z consists of three main "Saga's" than are comprised of multiple smaller story arcs. The following is a brief recap of each Saga.

Saiyan Arc- Goku, his son Gohan, and his former arch-nemesis Piccolo are forced to face off against Goku's brother, Raditz. Goku finds out that he is actually a member of a Saiyan warrior race and is forced to decide between destroying the Earth and fighting back against his own brother.

Vegeta Arc- The death of Raditz and Goku from their epic battle brings the attention of the remaining members of the Saiyan race, Prince Vegeta and his guardian Nappa. Prince Vegeta is particularly interested in the legend of the dragon balls, seven balls that may grant a wish when collected The Z Warriors are forced to train in anticipation of a large fight against the unstoppable warrior Saiyans. Meanwhile, Goku is forced to fight his way through hell in order to reach Kaio-sama (King Kai), a god who will teach him how to fight Vegeta and save Earth.

Namek Arc- Nappa dies and Vegeta barely survives the battle with Goku, forcing him to leave for the Planet Namek in search of that planet's dragon balls. With the dragon balls destroyed due to an unfortunate event, the Z warriors are forced to give chase to Vegeta. Along the way, both Vegeta and Z warriors Gohan, Krillin, and Bulma face serious opposition from space tyrant Frieza.

Frieza Arc- Frieza succeeds in collecting the Dragon Balls from Planet Namek, but does not know the password to activate them. An enraged Freeza attacks Vegeta and Gohan. Things begin looking dire until Piccolo and Goku arrive to provide much needed assistance. As the planet verges upon destruction from the might of Goku and Frieza, the other warriors escape to Earth. In a final burst of power, Goku becomes a Super Saiyan and kills Frieza as the planet explodes.

Garlic Jr Arc- Goku is still gone and the rest of the Z warriors are forced to fight Garlic Jr, an old enemy from Dragon Ball Z movie 1.

Trunks Arc- Piccolo, Gohan, and the others are surprised to find that Frieza survived the destruction of Planet Namek. Freeza arrives on Earth with his father to dish out punishment. Luckily, a mysterious Super Saiyan from the future, Trunks, arrives to put away Frieza and his father for good.

Androids Arc- Gohan and co. find out that Goku has survived the destruction on Namek. Goku, Gohan, Piccolo and the others are joined by Vegeta, as they are forced to face against the evil Dr. Gero and his nearly invincible androids. Vegeta becomes the third to turn Super Saiyan, along with Goku and Trunks.

Imperfect Cell Arc- Goku and the others are now forced to battle Gero's crown jewel- an artificial creature named Cell who looks to absorb Androids 17 and 18 to become a perfect fighter.

Perfect Cell Arc- A proud Vegeta allows Cell to become perfect in order to test his strength. Vegeta quickly finds that he is no match for the pure strength of Perfect Cell. To test his power against the best on Earth, Cell schedules a martial arts tournament, titled the Cell Games.

Cell Games Arc- Cell tests his strength and comes out on top over Goku, Trunks, and Vegeta. It is only Gohan, upon turning Super Saiyan 2, who can destroy the beast.

Great Saiyaman Arc- Years after the destruction of Cell, Gohan and his girlfriend masquerade as the Great Saiyaman 1 and 2 and fight crime.

World Tournament Arc- Goku, Vegeta and the others fight in the World Tournament of martial arts to challenge and strengthen themselves. Unfortunately, the tournament is effectively halted by the scheming of a wizard named Babidi.

Majin Vegeta Arc- Vegeta succumbs to the temptation of Babidi, who claims that he can help Vegeta unlock further levels of strength and finally top Goku. Vegeta becomes Majin Vegeta and challenges Goku as the world falls into perilous danger from a mystical villain named Majin Buu.

Majin Buu Arc- The childish Majin Buu is unleashed and reeks havok on Gohan, Piccolo, and the others. Gohan is forced to train with Dai-Kaioshin, the grand god of the universe, in hopes that he can put a stop to Majin Buu.

Fusion Arc- Majin Buu is able to purify himself and poses a further threat to the Earth. Goku must teach Vegeta's son Trunks and Goku's other son Goten the fusion technique before he leaves to Other World.

Kid Buu Arc- The fusion technique proves to be a temporary solution as Buu is able to further purify itself into Kid Buu. Only a last ditch Spirit Bomb technique by Goku, with the help of all citizens of Earth, is able to finally put a stop to the creature.