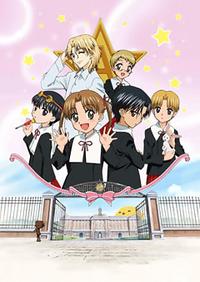 Share this page:
InfoPhotos (641)Reviews (27)Forum (4876)Fans (5433)Comments (11034)
Related Media
[Edit]
Overview
In a small country school, Sakura Mikan and Imai Hotaru are classmates and best friends - in their own way. Ditzy, emotional Mikan seems ill-matched with aloof, emotionless Hotaru, yet they are together all the time... until Hotaru gets called away to study at the strange and forbidding Alice Academy. In her anguish at being left behind, Mikan finally decides to follow her friend - and doing so, she makes a strange discovery.
Sakura Mikan, a girl from Northern of Japan, had a bestfriend named Imai Hotaru. Even though, she doesn't know it, but Hotaru was an alice. After 1-2 years of being friends, Hotaru went to another school where there were people like her, an alice. Mikan, so depressed about Hotaru leaving, went to the school and found at she was an alice as well. She found at that she had a cancellation alice which can cancel alices. Many students thought she somehow tricked the academy into thinking she was an alice. However, Mikan tries her hardest into proving their wrong, lifting up their hopes to be no. 1 and go see their families,etc. She does the best she can to make them friends and let them have confidence in themselves. And for some reason, she somehow changed the academy's students into becoming friends, and even, admirers. This anime is about friendship, love, selflessness, concern for others, and hope.
[Edit]
Alice Type

1. Latent Type- Latent alices are the most common in the school, and involve powers connected to ESP abilities. It's the most normal class and students here are of the serious type. Examples include teleportation and xray vision.
2. Technical Type- Just like its name, Technical Alice types appear when the individual experiments, such as cooking, drawing, etc. The Alices in this type are based on technology and research fields. Example include the ability to put souls into stuffed toys.
3. Somatic Type- This type is not filled with inventions or practice unlike other classes. The Somatic Alices are based on the body of humans, animals, and other living things, and appear in pheromone or physical ability. Examples include voice control, ability to run fast, and ability to change the facial appearance as you wish.
4. Special Ability- Basically, this class is for students with Alices that don't exactly fit in any of the other three classes. Their powers are different and the class is mixed. Some of the rarest Alices belong to this class. Some examples include the Doppelganger Alice and Nullification Alice.
5. Dangerous Ability- This is considered to be an extra type: basically, the Alice is so strong that it is a threat to the school. This class is very different from all the others and could also be described as an occult. Examples are the Stealing Alice and the Fire Alice.

Every Alice is categorized as one of four shapes, which specify how much of it can be used and how often.

A star-ranking is the evaluation system that the Academy uses to judge a student's school work, Alice level and attitude. There are four rankings which are indicated by the number of gold stars on a student's collar.

Each star ranking has its own monthly allowance rate:

There are specially design prevention devices made for a particular person. There are numerous devices worn on the head, hand, and such that can emit tracking signals. Each kind has sealing abilities (the locking away of Alice within the device). There are also control devices for punishment purposes like the Cat Mask. Anyone who wears these devices and disobeys the higher-ups, are punished by the devices. It immediately sends a pulsating electric shock throughout the body. These devices can only be removed by the person who placed it on.

1 # Our School Will Be Gone

6 # I'm With The Good-For-Nothing Types

7 # I Won't Lose the Alice Dodgeball

12 # The School Festival is Here

13 # Go After the Superstar

16 # Imagine the Maze, the Magic Lamp

21 # Aim for the Honor Student Award

There is no second season nor news out making one either, for the time being. Some rumors have been spreading that they might be a second season of Gakuen Alice in MAY 2009 but there is a big chance that this anime would not continue since the manga is still in progress.
The manga of this series has 164 chapters, as of 04/06/2012.