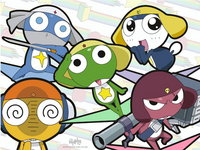 Share this page:
InfoPhotos (5)Reviews (1)Forum (0)Fans (73)Comments (16)
Related Media
[Edit]
Overview
Sgt. Frog (ケロロ軍曹, Keroro Gunsō?, Sergeant Keroro) is a manga series by Mine Yoshizaki. It was later serialized into a TV anime series directed by Junichi Sato. Both the anime and manga are comedies that follow the attempts of a platoon of frog-like alien invaders to conquer Earth. Sergeant Keroro, the titular character, is the leader of the platoon, but is at the mercy of a human family of three. In both the manga and anime, Keroro is forced to do meaningless chores and errands for the family after his army abandons his platoon on Earth.

The series takes its comedy from a combination of wordplay (particularly puns and homophones), physical humor, situational humor, and numerous pop culture references (especially to Gundam, Space Battleship Yamato and Neon Genesis Evangelion). Various anime, games, manga, and other aspects of pop culture are parodied/referenced throughout the series as a bonus to older viewers. Both the manga and the anime are laden with pop-culture references, and even in the same story the references often vary wildly. In particular, the anime does not explicitly refer to Evangelion and other animations to which Bandai does not hold the copyrights, and only recreates the "feel" of famous scenes from other anime. The anime is instead much more detailed and direct in its Gundam references, since Bandai does hold rights to the Gundam franchise.

Sgt. Frog is published in Japan by Kadokawa Shoten, serialized in the magazine Shōnen Ace, and published in English by Tokyopop. The anime is produced by Sunrise, has aired on Animax, TV Tokyo, and TXN at 10:00 A.M. until 10:30 A.M. every Saturday since April 2004. In addition, 3 full-length theatrical movies have been released: Keroro Gunso, the Super Movie, 2006; Keroro Gunso 2, The Deep Sea Princess, 2007; and Keroro Gunso 3, Keroro vs. Keroro, 2008. All 3 films were directed by Junichi Sato and produced by Sunrise. At present, 15 English manga volumes have been released. ADV has announced they have acquired exclusive rights to an English dub of Sgt. Frog.. On 4 July 2008, however, it was announced that rights to the English release were transferred to FUNimation Entertainment .

In 2005, the manga received the 50th Shogakukan Manga Award for children's manga.