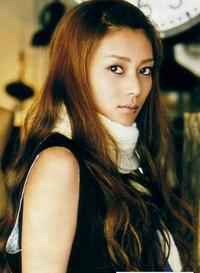 Music career
Shibasaki made her debut in the music industry in 2002 with her first single Trust My Feelings, but she became recognized for her second single Tsuki no shizuku which was used for the movie Yomigaeri. The song was one of the most successful J-Pop hits of 2003. Her first album peaked at number 2 and spent 68 weeks on the Oricon charts. Her second album was considered to be a commercial disappointment, in comparison to her first album, lasting 9 weeks and reaching a peak position of #5.[1]

Shibasaki's first Christmas song, "Actuality", was released in December 2006. "At Home" was released later on February 21, 2007. Both failed to reach the top 10 on the Oricon charts. "Hito Koi Meguri", released on March 28, 2007, reached number 8 on the charts. It became her first single to reach the top 10 since "Invitation". On April 25, 2007, Shibasaki's third album Kiki♥ was released and went straight to number one. On August 3 and 5, Shibasaki held her first concerts - "Kou Shibasaki Premium Live" in Osaka and Tokyo. 2400 participants of the concert were selected from over 30,000 applicants for the tickets (which accompanied the KiKi album).

In April 2008, the singer released two greatest hits albums, entitled The Single Best and The Back Best, each contained various tracks from the past. The Single Best topped the Oricon while The Back Best kept third, this broke Shibasaki's own record for it was her first time to reach top 1 on the weekly chart. In addition to that, she broke the record of Ayumi Hamasaki for maintaining both albums in top 3.

Though unable to compose (mainstream) music on her own, Kou Shibasaki writes the lyrics for most of her songs. Many of her singles have become theme songs for various films, dramas, and commercials. Her latest single "ラバソー～lover soul～" is the ending theme song for the live action drama Otomen.

Acting career
She was discovered at the age of 14 by an agent and has worked in numerous television shows, movies and commercials. Her stage name is taken from the main character of Junko Kawakami's manga Golden Delicious Apple Sherbet.

She became famous outside Japan for her role in the controversial 2000 film, Battle Royale, where she portrayed the cold-hearted and ruthless Mitsuko Souma; her acting career took off with this movie and also raised her international profile particularly in East Asia. Shibasaki also won acclaim for her role in 2001 film, Go, which earned her several awards, among which the Best Supporting Actress Award of Japanese Academy, the Hōchi Movie Award, the Kinema Junpō Award.

In 2002, Shibasaki took a supporting role as Yuki Mazashita in the television mystery drama, Sora Kara Furu Ichioku no Hoshi, where she co-starred with Takuya Kimura earning her an award as "Best Supporting Actress" while the show was named Best Drama at the 33rd Television Drama Academy Awards (Japan). She also starred in both seasons of Fuji TV drama, Dr. Koto Shinryojo, which aired in 2003 and 2006 respectively. The show was awarded Best Drama at the 38th Television Drama Academy Awards for its first season.

In 2005, Shibasaki appeared in the independent Japanese film, Maison de Himiko. In this film, she plays Saori, an unhappy young woman whose father is gay. Saori meets her father's boyfriend who urges her to come and meet her dying father at a place called Maison Do Himiko where several aging gay men live together. In 2006, she took the role of Dororo in the Japanese film, Dororo along with Satoshi Tsumabuki (her co-star from the 2004 television drama, Orange Days). The film made a sensation in Japan, and topped the box office for nearly six weeks. Shibasaki participated in two more movies in 2007: Maiko Haaaan!!! and Shaolin Girl, scheduled to be screened in 2008.

Shibasaki returned to television in 2007 in the dorama Galileo as the female lead co-starring with Masaharu Fukuyama. Highly rated among viewers (it finished its 10 episode run with an average viewership rating of 22%), the role continued her winning run in the medium when she won "Best Supporting Actress" at the 55th Television Drama Academy Awards. The show also won 5 other awards, including "Best Drama".