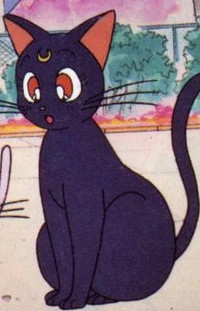 Share this page:
InfoPhotos (1)Reviews (0)Forum (0)Fans (5)Comments (1)
[Edit]
Overview
Luna (ルナ Runa?) first appears in the first episode or act of every version of the series. In the Silver Millennium, she was a servant to Princess Serenity, sworn never to leave her side, as well as an advisor to the Queen. When the kingdom fell, she and Artemis were put into a long sleep and sent down to Earth to look after the Senshi, who would eventually be reborn there. Part of Luna's memory was suppressed, in order to make her task easier; she only knew that she was supposed to find and awaken the Guardian Senshi.[2] She found Usagi Tsukino first and taught her to become Sailor Moon, not knowing that this was merely a disguise meant to hide Usagi's true identity as the reincarnated princess. Luna has blue eyes in the manga and live-action series, but red eyes in the anime.
In the manga, anime, and live-action series, Luna provides the Senshi with many of their special items, particularly early on. The items always spring into existence, seemingly out of thin air, and it is unclear whether she is creating them herself or simply producing them from some other location. In the manga only, she demonstrates some other special abilities, such as protecting the Senshi from a deadly attack.[citation needed]
Over the course of the series, Luna develops a close bond with Usagi, though early on it is on uneasy terms, as Luna often upsets Usagi by giving her advice she does not want, often leading to comic results. She also becomes good friends with Ami Mizuno. She and Artemis have an implied romantic relationship, which is confirmed when they meet Diana, who is their daughter from the future. During the Sailor Stars anime, Luna also develops a crush on Kou Yaten, one of the Three Lights.
Luna has a special manga story devoted to her, entitled "The Lover of Princess Kaguya," in which she falls in love with a human named Kakeru. This story was adapted in Sailor Moon S: The Movie, and features Luna's first transformation into human form, which has blue eyes even in the anime.
In the first official Sailor Moon character popularity poll, Luna was the eighth most popular character out of thirty eight choices.[3] One year later, now with fifty choices, Luna was the twenty-second most popular character.[4]
In the original anime, as well as the live-action series, Luna is voiced by Keiko Han, the same woman who voiced Queen Beryl.[5] Her English voice actress for the entire series was Jill Frappier, who portrayed the character with an English accent,[6] described as "fairly old, not to mention cranky and British".[7] Her role in the series has been compared to Rupert Giles' in Buffy the Vampire Slayer.[6]
Extended Information
Write an extended description!