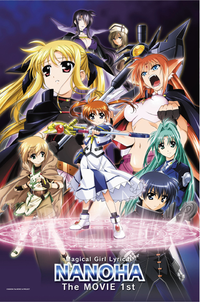 The series is a spin-off of the Triangle Heart series of games and OVAs. Nanoha, the magical girl and younger sister of Kyōya and Miyuki, takes precedence here while her sword-wielding siblings are reduced to minor characters. Nanoha is also clearly set in an alternate universe; the late Shirō Fuwa was always named Takamachi and survived his originally fatal injury, new characters such as Fate Testarossa are added, and others, such as Fiasse Crystela, are removed.

A sequel, Magical Girl Lyrical Nanoha A's, aired between October and December 2005. A third series, titled Magical Girl Lyrical Nanoha StrikerS began airing on April 1, 2007, and finished airing September 23, 2007. There have also been corresponding manga series bridging the story and adding new elements to it, as well as CD dramas. It has also been announced that a movie base on the retelling of the first story of Nanoha Takamachi is set to open in Japan on Winter. It will be titled, "Magical Girl Lyrical Nanoha The MOVIE 1st". The movie will retell the first story of Nanoha Takamachi, an ordinary third-grade girl who becomes a magical girl in search of Jewel Seeds from another world, and Fate Testarossa, another magical girl competing for the Jewel Seeds. However, it is emphasized that the movie is not necessarily the "true history" of the story, but a "new parallel history."