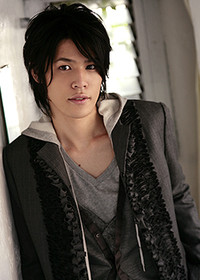 Mamoru Miyano is a male seiyū and actor. He is represented by Gekidan Himawari. Miyano's blood type is B, and he is 185cm in height and weighs 58 kg.

At the first Seiyu Awards, Miyano earned two nominations for portraying Light Yagami in Death Note: "Best Main Character (male)" and "Best Rookie (male)"; for that role, he was awarded 'best voice actor' in 2008 by the Tokyo International Anime Fair. Since March of 2007, he officially became a member of the Neoromance events held by the Japanese game company Koei, by voicing Aoi Kaji in Kiniro no Corda 2 PS game. The event was held in Yokohama, Japan, named as Seisou Gakuen Event.

He won the "Best Main Character (male)" award at the second Seiyu Awards in 2008 for his portrayal of Setsuna F. Seiei.
--Wikipedia

In 2006, Miyano voiced Light Yagami for the anime version of manga, Death Note. In 2007, for his role as Light Yagami, he was nominated for two awards at the first Seiyu Awards: "Best Lead Actor Award" and "Best New Actor Awards". In 2008, Miyano went on to provide the voice of Setsuna F Seiei, the main character of Mobile Suit Gundam 00. He won his first award, "Best Voice Actor", at the 2008 Tokyo International Anime Fair for his portrayal of Light Yagami and Setsuna F Seiei. In 2008, Miyano took on the role as Setsuna F Seiei again, for the second season of Mobile Suit Gundam. He won his first Seiyu award, for the roles of Setsuna F Seiei and Hakugen Rikuson in Kōtetsu Sangokushi.


Musical Career
Signed to King Records, Miyano debuted in May 2007 with the single, "Kuon" (久遠 ,lit. Eternity?), which was used as the ending theme song for anime series Kōtetsu Sangokushi. The single debuted at #47 on the Oricon charts. He then released his second single, "Discovery", in 2008 which was the intro song for PlayStation 2 video game, Fushigi Yūgi: Suzaku Ibun. The song debuted at the #24 position on the chart. In August Miyano released his first character single, "Soup/Hakosora", under the name Mamoru Miyano comes across Setsuna F Seiei (宮野真守 ｃｏｍｅ ａｃｒｏｓｓ 刹那・Ｆ・セイエイ ?). The single debuted on the chart at #18. In December he released his third single, "...Kimi e" (…君へ ,lit. ...To You?), which debuted at #18 on the charts. Miyano released his debut album, Break, on March 11, 2009.


Acting Career
Miyano's first acting job was in 1992 in Tokusou Exceedraft, where he appeared in a flashback as a child in a Yakuza member past. In 2003, Miyano joined the cast of The Prince of Tennis Musical playing Tetsu Ishida (石田 鉄 ,Ishida Tetsu?). He made his film debut in 2006's The Prince of Tennis.