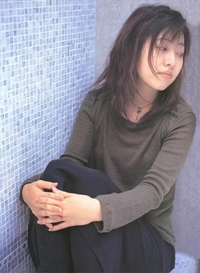 Megumi Hayashibara (林原 めぐみ, Hayashibara Megumi), born March 30, 1967 in Kita-ku, Tokyo, Japan) is a very popular Japanese seiyū, lyricist and singer. She is married and has one daughter.

Hayashibara began her voice acting career with training at the Arts Vision voice acting school/talent agency, while at the same time studying to be a registered nurse, her original career choice. Her debut as a seiyū came in 1986, with a bit part in the anime series Maison Ikkoku. She has since gone on to play many of anime's most beloved characters, including Hello Kitty, Faye Valentine in Cowboy Bebop, Lime from the Saber Marionette series, Haruka Urashima from Love Hina, Rei Ayanami of Neon Genesis Evangelion, Musashi (Jessie) of Team Rocket from the Pokémon anime series, Lina Inverse from the Slayers series, Canal in Lost Universe and the female Ranma Saotome in the Ranma 1/2 series.

According to the Anime News Network Encyclopedia, as of March 2007, Hayashibara is the most prolific female seiyū with 200 credits to her name. She is arguably the best known seiyū outside Japan, and is considered by some anime fans to be the "queen" of the seiyū, likely due to the large number of major roles she has performed, as well as the personal relationship she has cultivated with her fans, through her radio shows and her writing.

As one of the pioneers of the "Third Seiyū Boom", Hayashibara is among the most prolific seiyū-turned-singers in history. Since her musical debut in 1989, she has sung the theme songs for numerous anime series, including all the Slayers TV series, movies, and OVAs, Magical Shopping Arcade Abenobashi, Lost Universe, Sorcerer Hunters, most the Saber Marionette series Love Hina, the themes "Oversoul", "Trust You", "Northern Lights", and "Omokage" for Shaman King, and most recently the opening and ending themes of Gakuen Utopia Manabi Straight!. In addition, she has released several solo musical albums, and she has also sung as part of the bands DoCo and Ties, and as a guest vocalist for Hinata Girls. She has written lyrics for many of the songs she has performed.

Though Hayashibara is not well known in the music industry outside of Japan, within Japan, her albums sell strongly, routinely debuting in the top 10 on Japan’s Oricon pop music charts. Additionally, she hosts two radio shows, Tokyo Boogie Night and Heartful Station, which frequently showcase her songs, as well as those sung by other seiyū.