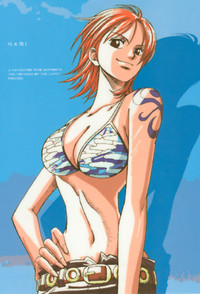 Share this page:
InfoPhotos (88)Reviews (1)Forum (0)Fans (23)Comments (1)
[Edit]
Overview
Nami (ナミ, Nami?) is a fictional character from Eiichiro Oda's shōnen anime and manga series One Piece. She is the navigator and the second to join the Straw Hat Pirates.

Source: Wikipedia
[Edit]
Extended Information
"Nami is a pirate and the navigator of the Straw Hat Pirates. She is the third member of the crew, and the second to join. She briefly betrays the crew during the Baratie Arc and rejoins at the end of the Arlong Arc after her past and true intentions are revealed.

Nami is a young woman with short, orange hair, and a relatively slim build, many people consider her to be very pretty. She is relatively short, even more than her otherwise remarkably short captain Luffy, but her slim build makes her look like she is at least of middle height. She has a blue tattoo (black in the manga) on her left shoulder which represents mikan and pinwheels (a homage to Bellemere and Genzo, respectively), where she used to have a tattoo for being a member of Arlong's Crew. Near the beginning of the series, Nami wears a variety of clothing in the series but her most longest lasting is her white and blue stripped shirt, an tan-orange skirt and boots. She retains this look till the Arlong Park arc, afterward she is seen wearing a different outfit for each arc. Nami wore thick, low cut leather boots and a simple blouse. However, during the Arlong Park arc and thereafter, Nami wore strappy, heeled sandals and more revealing outfits (With the tattoo no longer being a secret). She seemed to have abandoned the sandals for high-heeled boots as of Chapter 435. She usually pairs her tops with skirts with rings on them. Her overall physique matured suddenly (though this is, most likely, a simple change in style of artwork). Her fashion frequently changes as well as her hair style. Many of her shirts feature four-letter words, such as "MODE," "GOLD" or "EVIL," similar to a shirt that Bellemere once wore that had "MACE" on it.

Along with Nico Robin, Nami is one of the smartest of the Straw Hats and the third smartest character in the East Blue according to Oda, the first being Benn Beckman of the Red Hair Pirates and the 2nd being Captain Kuro. At the beginning of the series, Nami despised all pirates. She viewed them as nothing but bad people after losing someone close to her, only changing her mind after she met Luffy. Before her view changed on pirates, she was perfectly fine with giving Luffy up captive to Buggy, as she could not bring herself to stoop to their level. She also dismissed the Devil Fruits as myths until she saw Buggy's Bara Bara no Mi in action.

Nami is greedy and will do anything for money, accepting any challenge that comes along. Her love of money stems from her childhood, where she lived a poor life and was often upset at having little wealth despite the love of her adopted mother. While she will send in Luffy and the rest of the crew to meet the demand, the one thing she will not do is sell out a comrade; no matter what the sum. She has several times put her own crewmates in debt over trivial matters (like Luffy for tearing her coat and Zoro for borrowing Beli100,000 only not to spend it and return it later), her usual charge for repaying the debt being 300% interest, and will often bring up these debts in order to get someone to do something for her. She takes control of the amount of money the crew spends, ever aware of the crews spending habits (such as Luffy's desire to spend all they have on meat) and tries her hardest to avoid it getting spent all at once. To this end, she is in complete horror whenever the rest of the crew wastes money or passes up an opportunity to get it. She is loyal to her money, but no matter how much she denies it, her loyalty to her friends comes first.

Nami is very bossy and is usually ordering everyone around, including Luffy, despite not being the captain herself. Nami's main concern when she is in trouble is herself first and usually has other members do her fighting, resulting in her fighting in fewer fights. She is a coward, though not on the same level as Usopp; her cowardice has more to do with survival. She is aware of dangers they face every day and has a much better understanding of the world and its more dangerous individuals (e.g. the Shichibukai) than most of her crew, though lacks Robin's knowledge on some of its other powerful figures (e.g. the Marines Admirals) and organizations (e.g. the Yonko). She can be devilish at times and will not think twice about ditching the others to save her own life. She has been known to stand her ground against anyone hurting her comrades, abandoning her otherwise normal routine of trying to stay out of harm's way.

However, in return for her lesser sympathetic personality traits, she is also one of the more compassionate crew members who is fast to show sympathy when hearing sad things about other people. She is willing to forgive even people who have hurt her for many years. She is easily one of the Straw Hat's most emotional members, she cries easily and she shows much understanding of and insight into feelings. This often makes her good to comfort her friends (though she has also done the opposite to comically effect)

After the two year timeskip, she does not over-react, scold, or hit the crew as often for their rash actions anymore. In fact she appears quite calm in the most daunting of situations since the crew reunited, though is still prone to panic in the face of imminent danger. She also has developed a high stamina for drinking during celebrations and can drink as much (or more) than the rest of the crew. In fact, during the two year timeskip she has shown to be able to drink even more than previous."