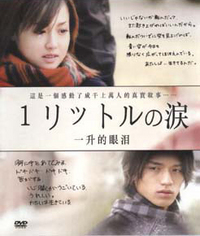 A Diary with Tears

One Litre of Tears

Summary
15-year-old Ikeuchi Aya was an ordinary girl, the daughter of a family who runs a tofu shop and a soon-to-be high schooler. However, odd things have been happening to Aya lately. She has been falling down often and walks strange. Her mother, Shioka, takes Aya to see the doctor, and he informs Shioka that Aya has spinocerebellar ataxia - a terrible disease where the cerebellum of the brain gradually deteriorates to the point where the victim cannot walk, speak, write, or eat. A cruel disease, as it does not affect the mind in the least. How will Aya react when told about her disease? And how will Aya live from now on?

This beautifully moving drama is based on the real-life struggles of a 15-year-old girl named Aya who suffered from an incurable disease, but lived life to the fullest until her death at 25. The script is based on the diary Aya kept writing until she could no longer hold a pen. The book that later followed entitled “One Litre of Tears" has sold over 1.1 million copies in Japan alone.

Aya's only wish was “to live." By carefully depicting Aya's earnest desire to live, and the love of her family, friends, and lover, the drama, “One Litre of Tears" wishes to deliver her simple but strong message: “Just being alive is such a lovely and wonderful thing."
(Source: FujiTV)

Due to the popularity of the drama series, on April 5, 2007, Fuji Television aired a three hour special of the series set half a year after Aya's death and focuses on Haruto Asō, who has now become a doctor at the same hospital Aya was treated in and Ako Ikeuchi, Aya's younger sister who is a training nurse. Haruto meets a 14-year-old female patient, who was bullied in school because of her disease, the same one that Aya had. Because of the bullying from school, Mizuki-chan decides not to receive therapy of any sort that would make her better, and she loses her will to live. It reminds Haruto of how Aya fought her illness and lived her life with her condition so he supports the patient. Aya reappears in the episode using a number of flashbacks from the series and in new scenes.