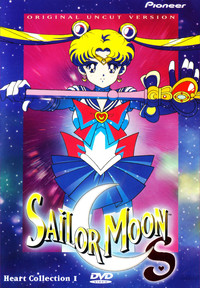 Share this page:
InfoPhotos (26)Reviews (1)Forum (0)Fans (213)Comments (13)
[Edit]
Overview
This is a list of episodes of the Sailor Moon anime series, covering Pretty Soldier Sailor Moon S (美少女戦士セーラームーン S, Bishōjo Senshi Sērā Mūn Sūpā?), the third season of the series. It was co-produced by TV Asahi, Toei Agency and Toei Animation and directed by Kunihiko Ikuhara, originally airing on TV Asahi between March 19, 1994 and February 25, 1995. The S stands for "Super," and is pronounced as such in the series' eyecatches.

This season was produced concurrently with the third story arc (Infinity) of the manga by Naoko Takeuchi, closely following the story of the manga. As with the two series before it, Sailor Moon S used "Moonlight Densetsu" as its opening song. For this series, the version by Moon Lips is used. The first two episodes use Sailor Moon R's ending theme, "Otome no Policy" (A Maiden's Policy). After this (from episode 92 on), the rest of the series uses "Tuxedo Mirage," performed by the five main voice actresses (Peach Hips).

Sailor Moon S is considered one of the darkest storylines in the series, partly due to the villains' ultimate goal of destroying, rather than conquering, all life in the world, as well as ethical themes of sacrifice. The arc is characterized by the appearance of three new Sailor Senshi: Sailors Uranus, Neptune, and Saturn. It also reintroduces the character of Sailor Pluto and gives her a civilian identiy, Setsuna Meioh. In the anime, Chibiusa is seen for the first time in her capacity as Sailor Chibi Moon. The series antagonists are the Death Busters, led by mad scientist Professor Tomoe and the Witches 5.

This season was not dubbed into English until 2000, three years after the last episodes of the previous series. By this time, the license had gone to Cloverway Inc., who did not cut any episodes, although they did edit the ones they produced. The educational "Sailor Says" conclusions were not continued, and the dubbed episode numbers were adjusted by YTV (which first broadcast the show, in Canada) to match those of the original Japanese version. Because of this, English episodes 83-89 do not exist.

One of the controversies surrounding Sailor Moon S is in the relationship of Sailor Uranus and Sailor Neptune, who are subtly depicted as lovers, although this is never mentioned directly. Takeuchi has openly admitted they are a couple, and their voice actresses were instructed to play the characters "as if they are a married couple." However, because of differing cultural standards, in the dubbed version this subtext is removed, and instead they are stated to be cousins.