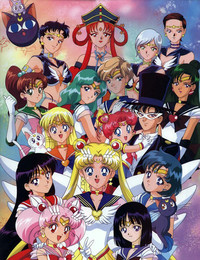 This season is based on the fifth story arc (Stars) of the manga by Naoko Takeuchi. Because the series was already so popular, Toei Animation started adapting Stars into an anime before the manga was even finished. The anime follows the same themes and depicts many of the same characters and events as the manga, but with fewer new characters and some significant divergences, especially toward the end.

Sailor Stars begins with six episodes that reintroduce the previous season's villain, Queen Nehellenia, as well as the four Outer Senshi, who had been absent for the duration of that story. These episodes were created as filler to allow Takeuchi time to begin her new story arc, and afterward the season follows the manga. Its plot branches out to introduce new characters and even new Sailor Senshi from other planets, including the Sailor Starlights, Princess Kakyuu, and ChibiChibi. As in the manga, Chibiusa returns to her own time and is not a participant in the events of this story arc. The primary villain is Sailor Galaxia, queen of an organization called Shadow Galactica, who seeks to rule the galaxy by collecting "true star seeds" (the equivalent of the manga's Sailor Crystals). Of the five story arcs, Sailor Stars is the only one featuring recurring villains of only one gender; all female, because they are all parody-Senshi. In the anime, it is also the only arc in which all the villains who die are killed by other villains.

Takeuchi expressed disappointment with some of the changes that were made in the adaptation from the manga, stating that many of things she had wanted to see included in the anime did not appear, including the Senshi's final uniforms and characters such as Sailors Kakyuu, Cosmos, Lethe, and Mnemosyne. She was also startled to learn that the Sailor Starlights, who were meant to be very minor characters, were given leading roles in the anime. In particular, she was strongly displeased that the Starlights physically changed gender and became men while on Earth, feeling that it undermined her rule that only girls could be Senshi.

Sailor Stars has never been officially dubbed or subtitled into English, but it has been broadcast in several other Western markets, including parts of Latin America and Europe. The corresponding manga volumes have been translated into English by Tokyopop.