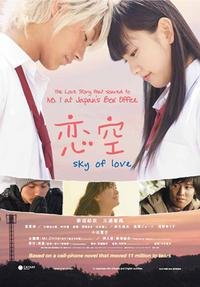 Share this page:
InfoPhotos (94)Reviews (4)Forum (588)Fans (2189)Comments (2767)
[Edit]
Overview
The cell-phone novel that moved 11 million to tears. Uploaded to a cell-phone website, this tale of an average girl’s three stormy years of high school, a saga of love, rape, pregnancy, miscarriage, parting, and reunion, is in fact a true story. Striking a chord with many women, its popularity spread like wildfire by word of mouth, and published in book form was an instant best-seller, with 1.3 million copies snapped up in only three weeks. The work is a true phenomenon of the emerging cell-phone society.
(source: Moviexclusive.com)

The movie starts out in the present (movie takes place in Mika's past) and she telling someone (through her mind) how much pain and joy her meeting this person (Hiro) had brought her.
The movie then goes into telling their story.
Mika and her friend Aya are in the bathroom applying make up, and they go to see Nozomu, a boy Aya has a crush on. When they see him in the hall Nozomu ignores Aya and asks for Mika's phone number instead, Aya cuts in, asking for his and taking away his attention. Mika slips away and bumps into a boy with bleached hair. After saying sorry she runs off, the boy watching her. Aya finds Mika later and is disapointed Nozomu took a liking to Mika. Mika, being a good friend, promises she'll never date Nozomu.

After Mika loses her cellphone one day, she goes to look for it in the library. She hears it ringing and picks it up, saying thank you because she thinks it's her friend Aya calling the phone. Instead she hears a male voice, when she asks who it is the boy replies 'secret' and hangs up. Mika looks through her phone to see all her numbers have been erased and only a number she doesn't know is listed. She calls the boy back and asks why he did that. He replies, "if they want to talk to you, then they'll call you." and asks if his number is listed first. He hangs up again.

The boy continue to calls Mika everyday. She wonders why he does it, and he refuses to tell her who he is. The boy asks Mika alot about herself, and they seem to be able to talk very easily. During a fireworks fesitival, the boy vaguely describes how he looks and Mika fails in drawing him.
Mika begins to question the boy, and to prove he's near her, he says to look in the sky and take a picture of a jet passing through the sky. He tells her it's their first memory/moment together.

A day after Mika's birthday, the boy wants to celebrate with her, and tells her to meet him by the pool. Scared and excited, Mika decides to go. After Aya applies makeup on her, Mika heads to the pool. She waits for him, and just as she decides he's not going to show, he appears and hands her flowers. Mika notices his hair and isn't convinced. To prove he's the same boy who talked to her on the phone. He shows her the photo of the jet plane in the sky. Mika calls the flowers pitiful and runs away.
Aya later asks how it went. Mika replies that the guy was a scary silver haired boy.

While on her way home, Mika follows Hiro and sees him planting the flowers. He sees her and sprays a hose into the air, creating a rainbow. He tells her it's her real present, and they both laugh. Mika notes how easy it was for Hiro to win over her heart every time.


Later on, they start dating and mika experince the gentle pain that hiro is giving her. She wakes up in his bed seeing that her shirt is unbottoned and he sleeping besides her with his arm on her stomach. When she gets up, she hears him say "Saki, where you going?" and she feels heart broken. On her way home she recieves a text mesage by hiro saying "Sorry i feel asleep." and she replies "Can i trust you?" and he said "of course." and she closes her phone.

A day passes and hiro askes her to a date. She calls him saying that shes too early and he tells her to wait fot him there. She sits on the bench doing what he told her. Just then a black car stoppes in front of her and while she is applying lip gloss. 3 men comes out and pulled her in the car. They arrive at a deserted place where the grass is tall. Mika slides the door open and starts running towards the street. The men follows her. Suddenly she feel down and got raped.

She wakes up on the floor remembering what had happened. She gets up hearing that Hiro is calling her. She ignores it and walks up to the street. It was already dark and she finds the street where she was taken by the men. She finds hiro riding his bike and she hides behind a tall rock. He calls her and hears her ringtone. Mika gets up and starts running. Hiro chases her and ask her whats wrong. She doesnt say anything and bursts out crying. Hiro huggs her and said "Sorry, i couldnt protect you." And he kept saying sorry.

Mika is at Hiro's house in his room, while hiro looks for the men who raped her. Mika is with Hiro's older sister. Hiro's sister looked from her sewing and sees that shes shaking. She rubs Mika back saying "Its okay. You have Hiro to protect you. I've been threw this before so i know your pain." Hiro is at an abonded building beating up all the men. He asks who did these to Mika and one of the men say that it was Saki (Hiro's ex) Hiro gets mad and breaks the cameria and gets on the bike and looks for Saki. Mika is still shaking and hears screaming outside of Hiro's room. Suddenly he appears with Saki holding her by her hair. "What should we do to her? I could kill her if you want. Say the word and i'll do it." hiro said. Mika shakes her head and says "I dont want to be apart from Hiro!" hiro walks away from Saki to go hug Mika while his older sister graps the siccors and starts cutting off Saki hair