Share this page:
InfoReviews (1)Fans (10)
[Edit]
Overview
Transcribing Japanese words and names into English is rather confusing. There are several different methods, each with their own rules and means of presenting a certain Japanese word/name. Just take a look at the various forms in the following example and see how different they can be: 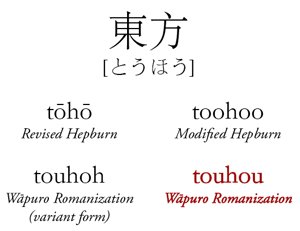 For the sake of sanity (both on our part, and on yours), the Crunchyroll Library uses the Wāpuro Romanization scheme. Included here are the basic things you need to know about this Romanization scheme, so that the changes you submit to the library will be consistent with existing entries.


Summary
A quick overview of the basic rules are as follows:

1. Write long vowels as "uu" and "ou", keeping in mind that it becomes "oo" if it is at the start of a word.
2. Syllabic "n" is ALWAYS "n".
3. Loan words retain the spelling from their language of origin.
4. Popular words may be written as they appear in English.
[Edit]
Wāpuro Romanization

The word "Wāpuro" is a contraction of the Japanese term "wādo purosessa", or "word processor" in English. This system is used for typing in Japanese characters on a western style QWERTY keyboard; hence, if you know how to type in Japanese using a QWERTY keyboard, you're probably already familiar with the Wāpuro scheme of romanization.

If not, this guide will help you learn the very basics. Each rule in the scheme will be presented with examples from other romanization schemes (like the example above). This is so that if you obtain your information from other websites or sources, you'll be able to spot these differences and know how they should be written in the Wāpuro scheme. If you still need more help, feel free to contact a Library Moderator via PM.

1. Long Vowels ("uu" and "ou")
Some Japanese names look like the following when Romanized: 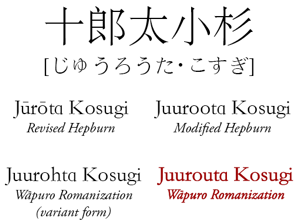 The "uu" and "ou" in this example are known as Long Vowels. In the Wāpuro scheme, these long vowels are written as so. Other forms use macrons (the line above the letter in the Revised Hepburn scheme) above these vowels, so if you see these, convert them to Wāpuro like so:

You might see some people write the long "ou" vowel as "oh". In these cases, stick to the former.

Here are some more examples: 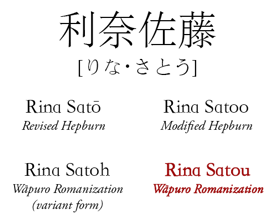 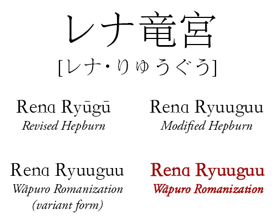 Notice that in the last example, only the Revised Hepburn scheme is different. With this in mind, the long "ou" vowel is of greater concern since there are several ways of writing it.

The only exception is a long "ou" vowel that comes at the beginning of a name, like so: 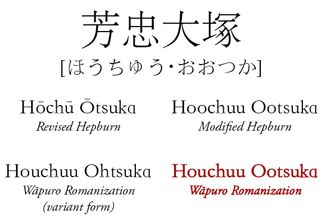 This happens in most cases, but not all. If you see a long "ou" vowel at the beginning of a name, avoid using "oh" and simply double the "oo". 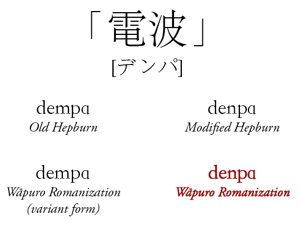 The older Hepburn scheme uses an "m" in place of the "n", and some people still use this convention since it sounds closer to the actual pronunciation. Despite this, refrain from changing it and leave it as "n".

3. Loan Words
For the purposes of simplicity in the Crunchyroll Library, all foreign (non-Japanese) loan words/names should be retained in their original form (i.e. from the language of origin). The name "Brian Lee", for example, should not be written as "Buraian Rii". Simply leave it as is.

4. Popular Words
Again, for simplicity, popular Japanese words (i.e. loan words in the English language) may follow English spelling rules. Tokyo and Osaka, for example, are written as Toukyou and Oosaka, respectively, using the Wāpuro scheme. In these cases, stick to the English spelling, instead.