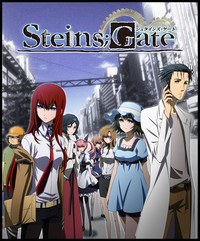 Share this page:
InfoPhotos (9)Reviews (7)Forum (0)Fans (9)Comments (28)
[Edit]
Overview
Steins;Gate (シュタインズ・ゲート, Shutainzu Gēto?) is a Japanese visual novel developed by 5pb. and Nitroplus, and was released on October 15, 2009 for the Xbox 360. This is the two companies' second time collaborating together after Chaos;Head. A port to the Windows operating system on the PC was released on August 26, 2010 and a port for Sony's PlayStation Portable handheld game console will be released in June, 2011. The game is described by the development team as a "hypothetical science ADV" (想定科学ADV, Sōtei Kagaku ADV?). The gameplay in Steins;Gate follows a linear plot line which offers pre-determined scenarios with courses of interaction.

The story of Steins;Gate takes place in Akihabara and is about a group of friends who have customized their microwave into a device that can send text messages to the past. As they perform different experiments, an organization named SERN who has been doing their own research on time travel tracks them down and now the characters have to find a way to avoid being captured by them. Steins;Gate has been praised for its intertwining storyline and the voice actors have been commended for their portrayal of the characters. A manga adaptation of the story illustrated by Sarachi Yomi began serialization in Media Factory's Monthly Comic Alive magazine on September 26, 2009. A second manga series illustrated by Kenji Mizuta began serialization in Mag Garden's Monthly Comic Blade on December 28, 2009. An anime adaptation began airing on April 6, 2011. A sequel game titled Steins;Gate Hiyoku Renri no Darling will be released on June 16, 2011.

Steins;Gate's gameplay requires little interaction from the player as most of the duration of the game is spent on reading the text that appears on the screen which represents either the dialogue between the various characters or the thoughts of the protagonist. Like many other visual novels, there are specific points in Steins;Gate where the user is given a choice to affect the direction of the game.

For these decision points, Steins;Gate presents the user with the "phone trigger" (フォーントリガー, fōn torigaa?) system which is similar to the "delusional trigger" system that was introduced in Chaos;Head. When the player receives a phone call from somebody, the player can choose to answer or ignore the call. Incoming text messages will have specific words underlined and highlighted in blue, much like a hyperlink on a browser, where the player can select on to reply to the text message. Most phone calls or text messages do not have to be responded to though there are certain points in the game where the player is required to take action. Depending on the player's choices on how to respond to these phone calls and text messages, the plot will progress in a specific direction.

Steins;Gate is set in the summer of 2010, approximately one year after the events that took place in Chaos;Head, in Akihabara. Physical locales of Akihabara like the Radio Kaikan building can be spotted in the game. According to Chiyomaru Shikura, who headed the planning of Steins;Gate, Akihabara was chosen because it is an easy place for acquiring hardware parts which makes it the ideal place for people interested in inventing and tinkering with things. The notion of time and time traveling are the main themes of the game. The concept of cause and effect is featured prominently in the game as the protagonist travels back in time numerous times to perform different actions in an attempt to alter what has happened in the future.