Could LLENN's rival give even Kirito's rogue gallery a run for their money? 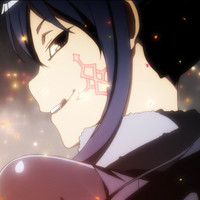 Ah, villains – how we love to hate them! When you get down to it, many stories we love are battles between good and evil. However, while we walk the narrative path alongside our heroes, forming bonds as we watch them overcome their struggles, a certain extra spice is often needed to convince us of their foils.This, arguably, makes the villains some of the most intriguing characters in fiction.

Being a long-running series, the heroes of Sword Art Online have faced off with many an antagonist, compiling a rogue gallery full of obsessed game developers, sadist serial killers, and most terrifying of all, sleazy businessmen. But what if the franchise’s true greatest foe isn’t one who has crossed swords with Kirito? I am, of course, referring to Pitohui from Sword Art Online Alternative: Gun Gale Online! 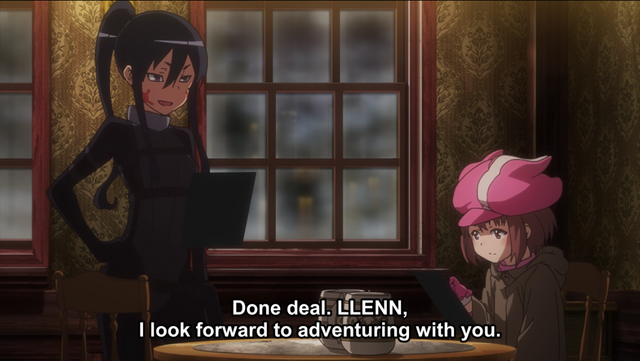 What first drew me to Pitohui was how we met her: as a friend, mentor, and LLENN’s introduction to Gun Gale Online. Her rough, intimidating appearance certainly left an impression, but was inconspicuously fitting for the game’s post-apocalyptic setting. What fascinates me about Pitohui now, though, is how even though she’s become an obstacle LLENN must overcome, her personality hasn’t changed one bit. There was no shocking betrayal like Bleach’s Sosuke Aizen, yet every display of sadistic glee feels more than natural for the character who once motivated a newbie to make their competitive Squad Jam debut.

A charismatic presence helped propel Loki into becoming one of Marvel’s most-loved baddies, and a similar energy is helping cement Pitohui as Sword Art Online’s most memorable yet. Akihiko Kayaba kept his distance while masquerading as a stoic commander, everything about Sugou Noboyuki was just detestable, and Death Gun didn’t even show their faces until the end-game. While Pitohui’s real identity may remain a mystery in the anime, we’ve seen her face embrace the ecstasy of toying with an enemy, delight in gunning down entire squads, and even despair at death’s door. Like the trickster brother of Thor, Pitohui isn’t just the final boss awaiting at the end; she’s her own multifaceted person living in this world.

It’s not just Pitohui herself who convinces us of her character, either. Unlike Sword Art Online villains thus far, Pitohui has someone at her side who’s more than an accomplice or lackey: M. A peculiar person himself, when he pleaded for LLENN to defeat Pitohui, it wasn’t out of fear for his life, but hers. The love M holds for Pito can tell us one of two things: either the savage gunslinger has an unseen side worthy of adoration, M is crazy, or… why not both? 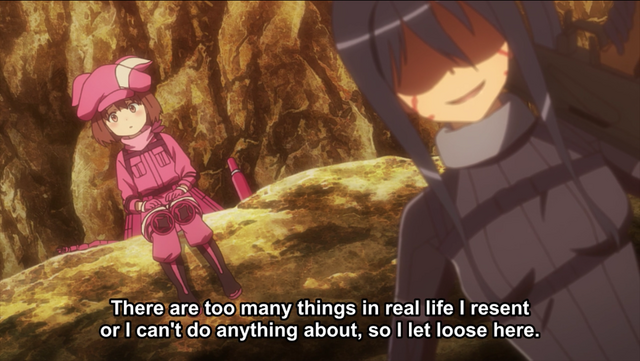 Pitohui’s most defining relationship, however, is with LLENN. She first met our pink protagonist due to rumours of a budding player killer; a playstyle that would have labelled LLENN a monster in Sword Art Online, but is merely a way to blow off steam with a friend in Gun Gale Online.

Their relationship is unlike so many others, as neither LLENN or Pitohui have yet to show any genuine malice towards each other. Their showdown began as a friendly promise acknowledging their skills, and LLENN joined the Squad Jam not to stop Pitohui in typical hero fashion, but to save a friend from herself. This is a wonderfully refreshing change of pace from Sword Art Online, where Kirito’s foes have been more personally distant with grandiose plans like Kayaba.

Even Pitohui’s fascinating motivation sets her apart from the villains in Sword Art Online and beyond. Her goal isn’t to bring suffering to others, but to embrace the death she feels she was denied (while bringing M into it for reasons we have yet to learn). Avoiding being dragged into the Sword Art Online Incident should have been celebrated as a fortunate near miss, yet why does Pitohui feel robbed by still being alive? There’s so much more to this character that we just don’t know, but I can’t wait to find out. 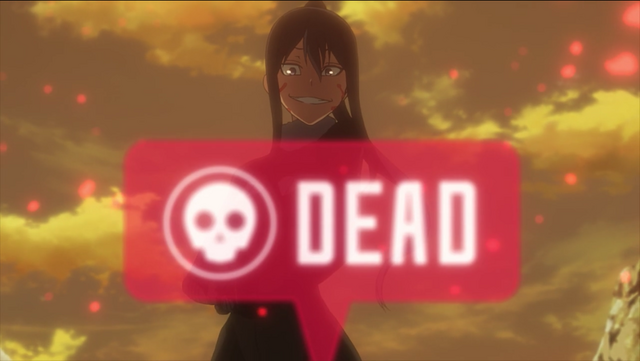 Her unique situation with M aside, some may consider the general lack of mortal consequences for her actions to be a weakness for Pitohui as a villain, yet I, surprisingly, find it a strength. The impact of her actions may not be as permanent as Kayaba or Death Gun’s, but that means I can feel no regrets when delighting in the chaotic spectacle of her wiping out whole teams by herself, without mercy. As well as being a visually striking sequence, it was at that moment that I felt the mix of fear and excitement that made me realize just how convincing and fun a villain Pitohui is.

My conscience may come knocking if the act fried their headsets, but with the worst happening to most of them simply being losing a game, is there any harm in taking the same twisted enjoyment I would when racking up kills streaks in a game myself? Besides, unhealthy obsession with the Sword Art Online Incident aside, are we really any different when holding a controller? I know the UN Human Rights Council may want to speak with me about my behavior in The Sims...

Who is your favorite Sword Art Online villain, and why? Let us know in the comments!