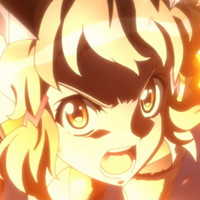 Hello everyone, and welcome back to Why It Works. Over the past few weeks, I’ve been catching up on a show that’s been near and dear to me for years, but had its final seasons stuck in streaming limbo for a while. If you haven’t heard of it, Symphogear is a show that regularly defies expectations, explanations, or any sort of dramatic coherency. It is an exuberant, explosive, and endlessly inventive action spectacle, absolutely packed with absurd powers and lovable characters. Symphogear is a must-watch for any action fan, and though I’ll do my best to briefly run down its merits, my plan here is to actually let the show’s own absurd turns do most of the talking. 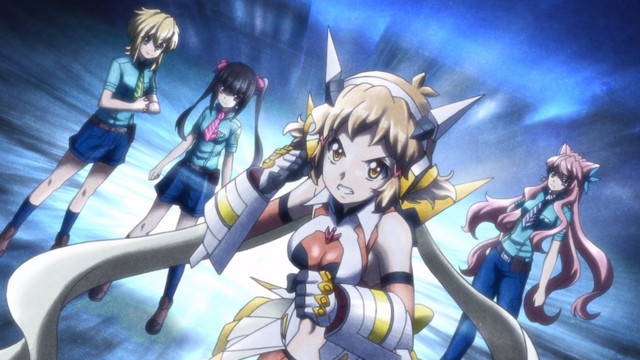 The first season introduces us to Hibiki Tachibana, a girl who swiftly finds herself possessing the power of Symphogear  — ancient relics which are powered by song, and which let their wielders transform into superpowered warriors. In practice, this means that Hibiki and her fellow Symphogear wielders must sing while they battle, expressing sentiments like “why can’t we get along” or "I’m gonna kill you so hard" in verse as they punch and shoot and slash the crap out of each other. Gathering allies along the way, Hibiki and her friends must do battle with other Symphogear wielders, wizards, mad scientists, alchemists, robots — and a variety of other charismatic villains — in a narrative that falls somewhere between JoJo’s Bizarre Adventure, Magical Girl Lyrical Nanoha, and Love Live!

That’s Symphogear’s elevator pitch, but explaining that does little to indicate quite how exciting, hilarious, and downright absurd Symphogear can be. So with that all established, let’s celebrate a few of the moments that truly define Symphogear’s genius  — the moments that make you want to ask a narrative referee if that’s really allowed, or at least confirm that what you just watched actually happened. Without further delay, here are my own top five Extremely Symphogear Moments! 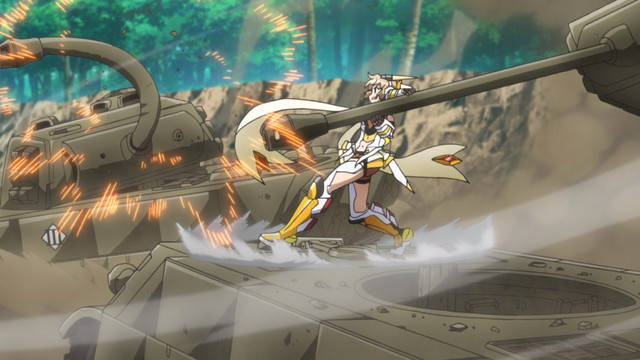 #1: The Time Hibiki Beat Up A Tank With Another Tank

Hibiki’s actually accomplished even more impressive physical feats than this, but there’s just something inherently satisfying about the crunch and impact of beating up a tank with an entirely different tank. Most Symphogear wielders have some kind of signature weapon, but Hibiki fights with her fists. As she explains it, that affords her the power to hold anyone’s hand at a moment’s notice. However, when faced with a pair of unruly tanks, Hibiki makes do with what’s on hand — that is, she rips the turret directly off the first tank and uses it to bat the second tank into oblivion. It’s that sort of thinking on her feet that makes Hibiki the best in the business.

#2: The Time Symphogear’s Villain Picked a Fight with the Moon

Frankly, the moon and Symphogear’s villains have had a rocky relationship ever since the first season, wherein the villain revealed they’d secretly built an impossibly large laser cannon to blow up the moon entirely. Her reasons for doing so were somewhat vague. As she puts it, the moon carries the “Curse of Balal,” which apparently prevents true human communication ... or something? Either way, blowing up the moon is clearly a villainous act, and so the Symphogear wielders must fight to protect it, even as Symphogear’s various villains assault it with lasers, rockets, potions, and whatever else they have on hand. 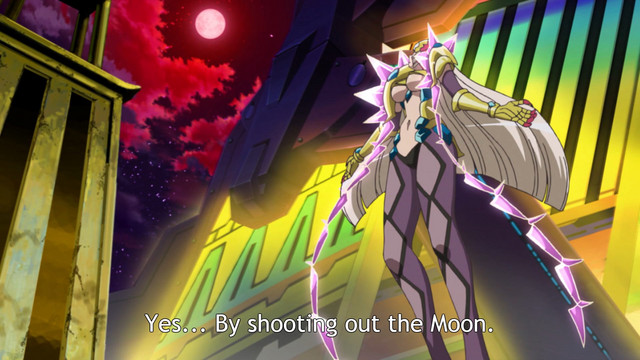 #3: Action Movies, the Essence of Training

Hibiki and her teammates have a stalwart ally on their side: Genjuro Kazinari, the leader of their team, and a man who deeply believes in the power of action cinema. Genjuro claims he learned everything he knows about combat from action movies and his results speak for themselves. The man is perfectly comfortable batting missiles aside with his bare fists and eventually takes his young wards on a variety of Rocky-styled training montages, with apparently effective results. Hibiki herself swears by her sensei’s methods. After beating the crap out of foes, she’s been seen to proudly declare that action movies teach you everything you need to know.

If you want to stay safe in Symphogear-land, you better not even think of enjoying any live music. Given Symphogear users are both singers and warriors, there are times when its stars indulge their artistic passions, and actually sing for a live crowd. This is, almost without exception, a terrible mistake  — both Symphogear’s first and second seasons commence on a live concert erupting into unimaginable violence because when you make your superheroes pop stars, you have a tendency to attract a lot of supervillains to your concerts. That said, successful Symphogear concerts tend to be incomparably beautiful experiences, so perhaps the gains are worth the risk. 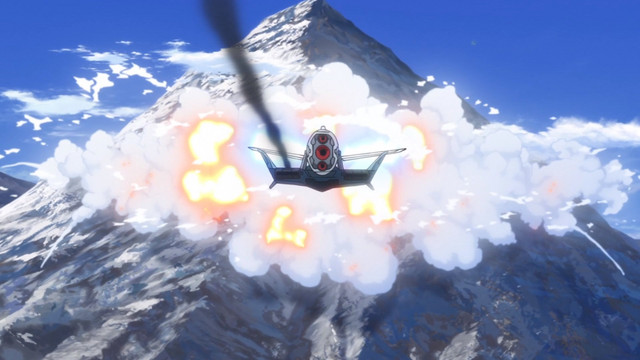 #5: The Time Hibiki Punched Through a Mountain

Symphogear season premieres tend to be a rolling cavalcade of action one-upmanship, as the show barrels through action sequences that pile improbability on top of absurdity to arrive at absolute genius. Never is this more clear than in the show’s third season, when a ship falling from the moon (there’s that pesky moon again) must be stopped by any means necessary. In this case, “any means necessary” apparently includes punching a hole clear through a friggin’ mountain, to allow the ship to pass without … doing something worse to the mountain? The reasoning is unclear, but the fact remains: Hibiki literally punched her way through a mountain.

There’s plenty more I could highlight, from the show’s charmingly ridiculous banana monsters to the many times its villains have picked fights with their various gods, but hopefully, this serves as a representative sample of the Symphogear experience. I wouldn’t want to spoil anything, after all — even if Symphogear’s perpetual escalation and absurd narrative twists make the idea of “spoiling” anything feel quaint and irrelevant. Symphogear is a uniquely thrilling experience within anime, and with all five seasons available on Crunchyroll, you have every reason to check it out this very instant!

Get out of here! Go watch Symphogear! Then come back and tell everyone your own favorite Symphogear absurdities in the comments.