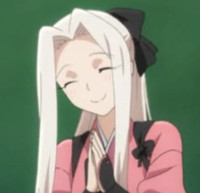 The first half of the trailer for the Japanese release of Fate/Zero's Blu-ray Box Set I is a suitably dramatic preview of the series itself. The second half spotlights the box set's goofy, original material, including a Q&A with Irisviel dressed as a very traditional Japanese housewife, written by Type-Moon original scenario creator Kinoko Nasu.