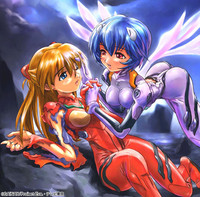 Asuka and Rei were a real yin and yang pair for Neon Genesis Evangelion. Not so much for Rebuild. Especially since her Pirate make-over, Red has eclipsed Blue for a position in the spotlight and fan attention.

Kadokawa-DWANGO chair and board member of Rebuild producer Khara Nobuo Kawakami has a new book on the secrets of Studio Ghibli and talent behind it. For this, a discussion with creator Hideaki Anno brought up the subject of Rei versus Asuka in the age of the new movies.

Anno explained that the TV version of Rei was overwhelmingly more attractive because she was a mystery, however, by the time that the series was complete, she was known to the fans. In light of that, the movies opted to work more with Asuka and the fans caught on.

This wasn't the first time that Anno cast off his First Children. Discussing Ryū Murakami's Fascism of Love and Fantasy, he said:

There was this replacement by a robot, so the original mother is the robot, but then there is a mother of the same age, Rei Ayanami, by [Shinji's] side. [She is] also by the side of the real father. There is also another father there, Adam, who governs the overall course of events. An Oedipus Complex within these multiple structures; that's what I wanted to do. "Ai to Genso no Fascism." I think there are ideological elements that are the same as those in the novel. [...] The thing that most moved me was [the fact that] when the protagonist, Toji Suzuhara, attempted to kill the current Prime Minister, he felt [the Prime Minister] was very much like a father. He thinks, I will kill my father, and violate my mother, Japan. So, he goes on to destroy Japan. I really like that passage. I like that Ryu Murakami's real feelings come out there. The novel itself is extremely boring, however (laughs).

The truth is, I have no emotional attachment to Rei at all.

In the midst of making Eva, I suddenly realized that I had forgotten her. Her very existence. For example, in episode seven, I remembered and added one shot with Rei. I had no attachment to her at all. I think that was okay, because in episode eight, she didn't appear. Not even in a single shot.

Episode 6 was too early.

At the end Rei says "I don't know what to do," and Shinji says, "I think you should smile," and Rei smiles. ... Afterwards, when I thought about it, I cursed. In short, if she and Shinji completely "communicated" there, then isn't she over with? At that moment, Rei, for me, was finished.

When she smiled, she was already finished, this character.